The Environmental Protection Agency has come down hard on bikes during the past couple of years. In 2006, all motorcycle manufacturers had to reduce the evaporative and nitrogen oxide emissions of their machines bikes by 60 percent. That meant the end of carburetors (cars haven’t had them since the late 1980s) and (worse) the adoption of computer controlled engine management (ECMS), the same electronic brain boxes that also control the engines (and everything else, just about) in all new cars.

Most bikes also now come from the factory with catastrophic converters fitted into their cans, too.

All of this is making new bikes more expensive – bad enough – but much worse, it’s also making it much harder for the average owner to perform the tuning and modification that has long been a big part of the fun of owning a bike (just as it used to be with cars, a long time ago).

Bikes, of course, have been equipped with anti-pollution devices (and “emissions calibrated”) for years. But the gear involved until quite recently was minimalist and – easily defeated.

Most obviously, the motorcycle industry was able to continue using carburetors – even on large cc sport bikes – until just a couple of years ago. Contrast this with cars, which have been fuel-injected across the board (even the most basic econo-box) since about 1987. Why have carbs been tossed in the bin? They make great power, are simple and easy to tune – but they do not have the ability to meter fuel as precisely as EFI. That means less efficient combustion, which means (drum roll) higher exhaust emissions.

So, they’re history. Even small cc off-road/dirt bikes are increasingly being fitted with EFI. I’m pretty sure all 2011 model year street bikes are injected.

Of course, computers are necessary to run the EFI; and that means an array of sensors, switches and wiring. Time to add such acronyms as MAP and MAF to your vocabulary. Goodbye jets. Hello fuzzy logic and laptops.

And fatter repair bills when any of this stuff craps out on you.

The aftermarket has caught up and offers smog-legal replacement pieces – but it ain’t cheap. Not like a set of jets, anyhow.

Worse, the  added complexity and development/certification costs will be reflected in higher prices for such things as mufflers and full exhaust systems. Many of us will have to turn the job of tuning our bikes over to the $75-per-hour pros – just as most cagers have had to do.

Catalytic converters make it harder (and cost more) to modify the stock exhaust system – formerly another easy (and fairly cheap) upgrade that many bikers did the day after they rode home from the dealership.

It’s also technically  illegal to “modify” the factory system, though it’s still easy to get away with – for now –  because in most parts of the country, the annual smog checks that apply to cars don’t yet apply to bikes.

But inevitably attention will focus on motorcycles – particularly as regards the politically charged issue of “tampering” –  defeating or rendering inoperative any part of the factory-installed emissions system.

Most bike shops will still – with a wink and a nod – gut whatever smog gear a new bike comes with as part of the tuning process and the quest for maximum power. Just as it was circa 1977 when it came to cars.

No car dealer would touch that with a 50 foot pole today, of course. The EPA Gestapo would come down on him real hard, probably close his store and definitely fine him into poverty.

Motorcyclists will soon face the same constricted reality. Not only will it be harder and more expensive to make any changes to our rides, bike shops will want no part of doing anything that might cause the EPA’s hellhounds to descend. And we may soon find ourselves waiting in line to get “smog checked” alongside the cagers.

The irony of it all is that bikes represent a tiny fraction of the daily-driven vehicle fleet –  less than 3 percent of all registered motor vehicles in the United States. Sure, that number has increased lately as rising gas prices have made bikes more appealing – but motorcycle emissions are still a small percentage of the total relative to cars and trucks. And it should be added that bikes – even high-performance bikes – are all very fuel-efficient, which is arguably itself an “emissions control,” since the less gas you burn, the less pollution you produce. That includes even C02, the “greenhouse” gas the save-the-planet Maggots harp about constantly.

Does any of that matter to the fuhrers who are targeting bikes? Of course not. Because it ain’t the emissions that matter.

It’s the power that comes from regulating those (supposed) emissions. 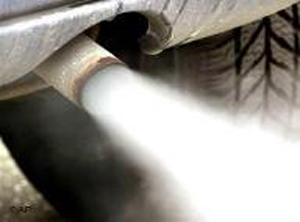