Here’s an irony of automotive history: Ralph Nader never actually drove a Corvair – the car he claimed was as “unsafe at any speed.”

Too bad for him – and, of course, for Chevrolet – since he never got to appreciate the many virtues of the snarky but ultimately doomed little car his name will forever be associated with.

Though I was born too late to enjoy these cars when they were new, I eventually acquired a ’64 Monza coupe in the mid-1990s. I wasn’t looking for one; it just happened to cross my path at the right time. The car’s oddball layout and low price piqued my interest. Corvairs were (and still are) very affordable as far as classic American cars of the ’60s go.

The car had all the goodies: 110-horsepower twin-carb six-cylinder engine with a four-speed on the floor; Daytona Blue exterior with white parchment interior. Cross-flagged emblem on the louvered “trunk” where the boxer six resided.

I loved the low-back bench seats (this was pre-federal safety regulations) that let you rest your right arm across the top as you drove.

Just a speedo, fuel gauge and a couple of idiot lights.

My ’64 did have one other thing, though – a transverse rear leaf spring that was installed on all Corvairs that year to patch the sometimes tricky handling characteristics the earlier (1960-’63) cars had become infamous for. Had GM added that little piece of metal the first year out, the early Porsche-like tendency of the back wheels to tuck in during a high speed turn – and lift-throttle oversteer –  would have been muted. And Nader would never have had a cause to build his career on.

Though originally conceived by GM as an economy car, the sporty-looking Corvair (especially Monza 900 coupes) quickly developed a following as a “poor man’s 911.” It  was sometimes driven beyond its limits by drivers who didn’t know theirs.

Problems arose when the car was pushed hard into a turn and the driver lifted off the throttle mid-corner. Like early Porsches, which also shared the Corvair’s swing-axle rear suspension layout, the result was sometimes sudden, even violent oversteer. If it got out of hand, the front and rear ends would swap positions, often several times in quick succession. Unlike the swing-axle Porsches of the era, however, the typical Corvair owner was not an experienced “shoe” who knew the importance of not lifting off the gas mid-corner.

Tire inflation pressures were also critical; too much (or not enough) air exacerbated the underlying chassis issues. Porsche drivers were probably more attuned to such things.

The total number of wrecks was not enormous – especially relative to the large number of Corvairs (several hundred thousand) in circulation. But a few high-profile ones set in motion a juggernaut of bad press that Nader eventually rode long and hard.

He lives off the fumes to this very day.

GM did take steps to address the problem – before Nader went on his tear, it’s worth pointing out. In 1962, for example, a Heavy Duty suspension option was added to the roster of options. It included stiffer springs and shorter rear axle straps; a front anti-sway bar also became available.

It was in ’64, however, that major changes were undertaken – including the adoption of the standard transverse-mounted rear leaf that largely corrected the earlier cars’ “tuck-in” problems when the driver lifted off the gas mid-corner.

For 1965, the entire car was revamped – with a sleek new body penned by Bill Mitchell (who also did the 1967 Camaro) and a true four-wheel, all-independent suspension very similar to the one used in the Corvette.

This second generation Corvair was even better than the original; it had matured into a genuine American Porsche that was among the best-handling cars of its time. Buyers could order a ‘Vair with a wild-looking four-carb intake or in turbocharged Spyder form and packing 150-plus horsepower. For a car that only weighed about 2,300 pounds, the result was snappy performance.

But the rise of V-8 muscle cars and the seemingly endless flow of cheap, hi-test leaded premium fuel shunted the six-cylinder Corvair to the sidelines – while the whispers and lawsuits and investigations about its being “unsafe at any speed” tarred its reputation irreparably.

It was a sad ending for a truly innovative car. Had it appeared as a brand-new model just a few years later, in the early ’70s – when the gas pinch began to take hold – it might have been a huge success.

It was not to be.

Meanwhile, I have nothing but kind words for the Corvair.

My ’64 ran well, only broke down once (when the fuel pump failed) and, despite what Nader argued, wasn’t an evil-handling death trap. With modern radials, in fact, the thing could run circles around its overweight, over-boosted, front-biased ’60s-era sheetmetal cousins. And it’s just so … different. People who had never seen one before were startled by its rear-engined layout with the improbable-looking fan belt that seemed to bend at a 90 degree angle as it ran from the generator to the boxer six’s crankshaft pulley. (The urban legend about Corvairs throwing belts is just that, by the way.)

The heater worked brilliantly, too – unlike an old VW Beetle’s, which either didn’t or smothered you with noxious fumes if it did.

There were a few niggles – such as the intricate throttle linkage for the dual-carb intake, which had to be set exactly right for the carbs to be perfectly synched. On a nearly 50-year-old car, this can take some time. Also, the thermostatic bellows that controlled the opening and closing of the flapper doors central to the cooling system of the ‘Vair’s air-cooled engine sometimes didn’t work quite right. I had to prop one of them open for awhile until I got it sorted out properly.

But all old cars have their bugs – and taken as a whole, the Corvair’s were pretty trivial. Nothing that kept me from driving the car often – and trusting it to keep on running, even on fairly long trips that put me far out of range of tools and the security of my garage.

Whether it’s a Plain Jane 700 sedan or Lakewood wagon, Greenbrier van, sporty Monza 900 or turbocharged Spyder – Corvair ownership is a unique experience not to be missed. Today, they are also one of the few classic American cars of the 1960s you can still acquire for about the cost of a three or four-year-old used Corolla or Civic.

If you come across one for sale, have a look. And don’t believe the badmouthing you may have heard.

He didn’t even have a license. 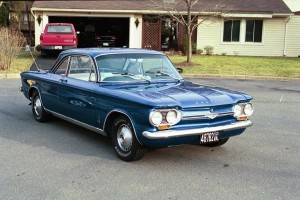 Find a 1960 Chevrolet car at LemonFree.com