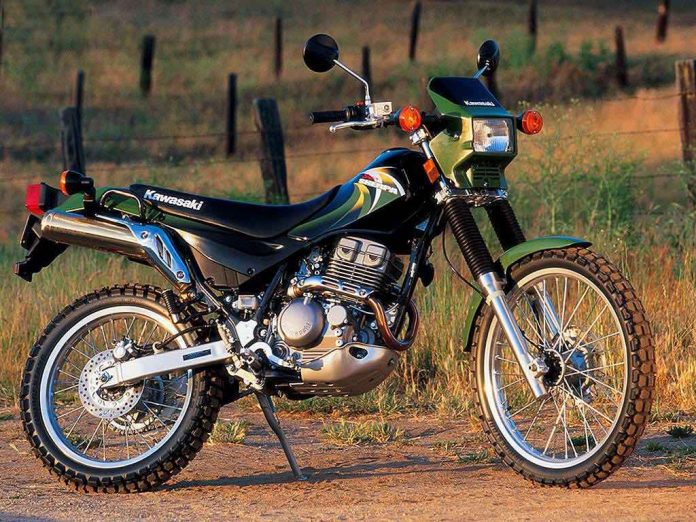 I used to own an odd little dual sport called the Sherpa Sherpa and – as often happens with odd little things one gets to like – I stupidly sold it before I realized how much I liked it.

It’s a fairly rare bike, but there’s a devoted, if small, owner’s society out there.
(See here for one of the many KL/KLR owners’ forums/)

The KL250 weighs 282 pounds, has a tube steel frame with an aluminum swingarm and “Uni-Trak” monotube/coil shock rear suspension. The engine is 14.5 hp DOHC air-cooled single. The transmission is a six-speed w/cable-actuated (non-hydraulic) clutch. It features a digital dashboard with twin tripmeters and clock, but no tachometer, temperature warning light/gauge or gas gauge. 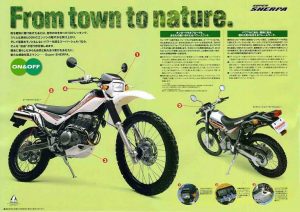 Many people confuse the KL250 with the more popular KLR250, but they are very different bikes even though they’re about the same size and even look similar from 20 yards out.

The Sherpa is more on-road oriented than the KLR – at least, as it comes from the factory. For example, the KL250 has street-intended tires that are helpless as Ned Beatty in Deliverance on anything more challenging than gravel. It also comes with a low-mount front fender. The original/factory chromed aluminum handlebar is also fairly delicate and can be easily bent if you drop the bike off-roading. The turn signals do have flexible stalks but they, too, are easy to damage when riding off-road.

One of the first things I did to my bike was to install the high-mount front fender and replace the street-minded factory tires with much more aggressive “90-10” (90 percent off-road) knobbies. I swapped out the factory handlebar, replacing it with an aftermarket (reinforced) tube-steel type that’s much tougher and also a little shorter, for clearance off-road. Finally, I replaced the street-oriented (and chromed) factory rearview mirrors with flexible plastic off-road mirrors. (The turn signals/stalks can be easily unplugged prior to riding if you head off-road. This, in my opinion, is the best solution for that issue.) 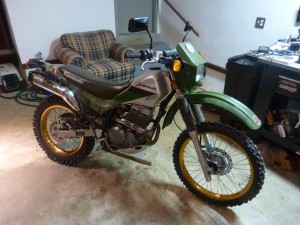 These minor mods made the bike much more off-road capable without screwing up its on-road capability (or legality).

Functionally, one of the major differences between the KL250 and the KLR250 is the engine. Both bikes have 250 cc singles but the KL’s single is air-cooled vs. the KLR250’s water-cooled engine.

I am partial to the air-cooled engine of the KL because they’re inherently simpler – and also inherently lower-maintenance. There’s no radiator to hole when you’re out in The Woods – and you never have to worry about replacing coolant or bursting a hose.

It’s true the KLR’s water-cooled engine makes a bit more power and handles high-heat summer days better – but the KL will still do 100-plus all out – and it can maintain 60 MPH with a 200 pound rider (me) on board. It’s actually pretty quick off the line and feels stronger over 50 mph than the KLR. 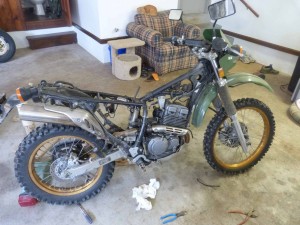 I think the KLR250 has “gruntier” gearing – and a slightly lower top speed – which would make sense for a bike designed to spend most of its not on pavement.

A weak point is the hyper-lean factory jetting, done for emissions – to placate the government. This makes the KL250 very cold natured and hard-starting if the air temp is less than 40 degrees. The good news is this is easily (and inexpensively) taken care of by swapping out the lean pilot and main jets with richer ones (use a 130 main, Kaw part #KW92063-1103 and pilot jet #45-20) and removing the brass air screw limiter, then setting the air screw to 2 and 3/4 turns out.

I did this the first month I owned my bike and it made a tremendous difference for the better. 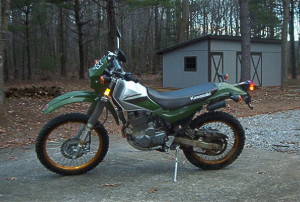 Another difference between the KLR ad the KL is the frame – and seat height. The Sherpa is a physically smaller bike than the KLR and you sit much lower in the KL (seat height is 32.7 inches). This is a plus for shorter riders as well as new riders. But taller riders (I’m 6 ft 3) can still comfortably ride this bike, too.

A big downside (off road) is that the KL’s suspension has less travel than the KLR’s – and if you are a heavy person (over 150 pounds) or ride aggressively off-road, the bike will bottom out more easily and the ride is definitely harsher.

Another difference: The KL250 has disc brakes front and rear whereas the KLR (older models, at least) has a drum rear brake. Having ridden both, I can vouch that the KL stops quicker and has better braking feel.

Another KL feature is the gold-anodized (and spoked) rims. They’re nice-looking and also expensive looking. 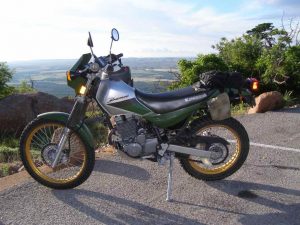 A downside is you’re limited in terms of the width of the rear tire you can mount because the KL250’s swingarm has less space between its bars than the KLR’s. I have a friend who owns a circa 1997 KLR250 and he was able to mount a much wider off-road tire than I could. But in real-world off-road use I have found that the KL will absolutely keep up with a KLR using the same tire – even if the KLR’s is larger. I have taken the KL down some scary trails where I live up in the Blue Ridge mountains – and the bike got me down and back as well as my buddy’s KLR. It has tackled stream wading and two feet of snow. It’s a tough, tenacious little thing.

There’s only one thing I about the KL250 I really don’t like – and which I consider a liability for an off-road bike : It has electric start, without a kicker back-up. 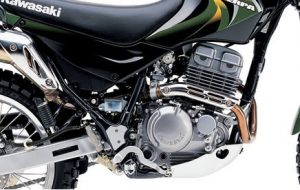 I prefer a kicker, regardless – but for off-road bikes, I think a kick-starter is a must-have.

Anyone who goes off-roading knows this scene: You’re deep in The Woods and just rode through a puddle you thought was three inches deep that turned out to be three feet deep. The bike stalls out. You heave it out of the muck, pull the spark plug and rotate the engine to clear the water out of the engine. Then you reinstall the plug and restart it. If it’s electric, you may only have a few seconds of juice – maybe none at all, if the battery fried out.

If it doesn’t light, you’re pushing.

At least until you find downhill stretch and roll-start the thing. Maybe there’s no hill.

But if you have a kicker, you’ll be riding again. It may take awhile and your leg may get sore, but so long as you can kick that thing, eventually, it will light off – and you won’t have to push it. 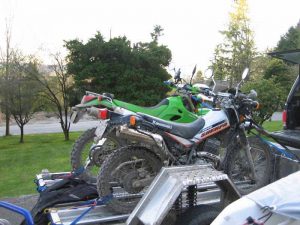 Or go get your truck.

When I got my bike, I spent a lot of time researching whether it would be feasible to retrofit a kicker. There is a plug on the side of the engine case where a kicker lever would go (it looks like). But after asking a lot of questions, I found out that doing this mod would involve a lot more work and money than I was willing to throw at it. Instead, I always made sure the battery was fully charged before I even think about going off-roading and I never ride in The Woods alone, just in case. Having to hump it several miles out of the wilderness because the bike won’t start is a even better than Captain Freedom’s Workout, though.

One of the Sherpa great virtues is that it requires very little upkeep. It takes 1.6 quarts of oil (w/filter change) and both the drain plug (underside of the case) and the filter access (under a cover on the righthand side of the bike; just unbolt two 10 mm bolts) are easy to to get at.

An oil/filter change takes less than 10 minutes and costs under $10.

There’s no radiator, so no leaks. And no coolant to change or hoses to sweat. Other than periodic chain tension checks/adjustments and a valve clearance check every 7,500 miles or so this bike doesn’t ask for much. It gets 60-70 MPGs, depending on how it’s set up (expect mileage to drop with off-road knobbies and jetting, etc.) and is extremely reliable. I ran worked mine like a Dickensian teenager in a tin mine – including sustained WOT runs at top speed for ten minutes at a time and and nothing went kablooey. 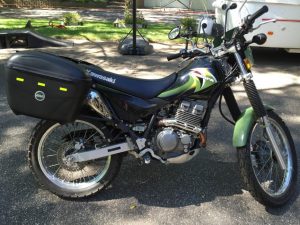 The KLR is the better hard-core off-road bike, mainly because of its superior clearance and suspension travel. But the KL is a bike that can do 90 percent of what the KLR can in real-world off-roading (unless you motocross) and it’s a better bike on-road that costs less to keep, too.

It’s also a better choice for a first bike/learner bike because it’s not too tall and has an easier-going nature – but it isn’t too small or underpowered to be your bike after you learn how to ride. It’s an excellent commuter bike that’s also a rugged trails bike still able to knock around local roads and keep up with highway traffic, if you need to.

If you can find one, you will probably find you’ll like it as much as I did.