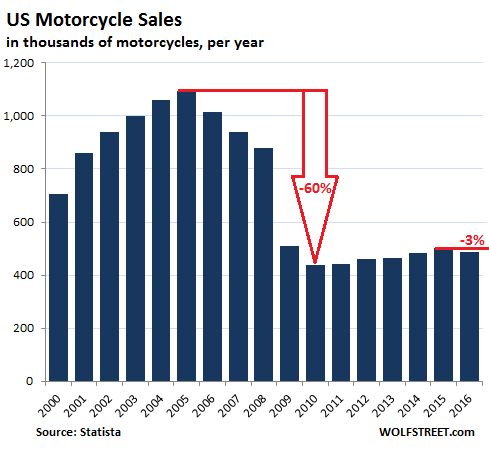 Harley sales are in free-fall – down 9.3 percent in the U.S. for the first fiscal quarter that ended this summer – amounting to losses of $258.9 million. The company has announced it will lay off about 200 workers this fall.

The rest of the industry’s not doing so well, either.

You can still find plenty of leftover 2016 model year bikes at most dealerships – and we’re eight weeks away from 2018. To say sales of new motorcycles have been slow is an understatement right up there with advising the captain of the Titanic that there’s a “little leak” down in the hold. 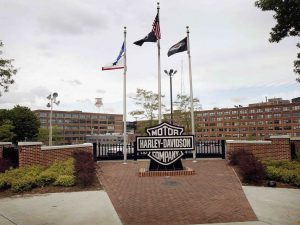 Yes. Of course. Always, these days. There is almost nothing bad happening that, to one degree or another, hasn’t got his grubby fingerprints all over it.

It is because of Uncle that motorcycling isn’t what it was once – freeing, in particular. It has become expensive, which is a drag if you’re young, especially. Millennials – the next-up generation that ought to be swelling the new rider ranks – aren’t. Probably because they can’t afford it.

Debt sucks. And Millennials are saddled with plenty of that already.

Here are some telling stats:

The median age of a rider today is 47 – up from 32 in 1990. That is a several standard deviation’s difference and so no small thing.

Even more alarming – if you make or sell new bikes for a living – is that the number of first-time/new riders in the 18-24 cohort – the people who will form the backbone of your buyer base for the next 20-30 years – is down from 16 percent of the total pool back in 1990 to a depressing 6 percent today. 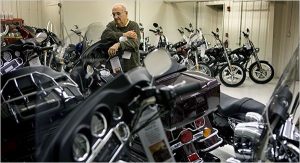 Almost no 18 year-olds (a mere 2 percent) are throwing a leg over – down from 8 percent back then.

Motorcycling has become not-cheap for several reasons – all traceable to Uncle.

Bikes are now mandated to have the same expense-padding equipment – especially anti-pollution equipment – that cars have had to have for decades. Non-bikers often don’t know this, but until fairly recently – the mid-2000s – most new bikes did not have computers or catalytic converters and a majority of them still had carburetors rather than electronic fuel injection. 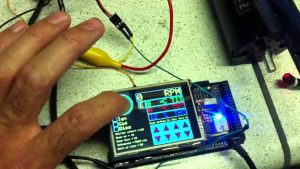 The reason being that even big bikes have small engines relative to cars and the number of bikes on the road is a fraction of the number of cars on the road. Only about 1 in 40 people  even own a bike. Most people own at least one car and many own several. And unlike most cars – which are used regularly – most bikes are ridden intermittently. The majority are ridden for pleasure, not for utilitarian reasons.

Point being, bikes – even without all the emissions gear – don’t emit much in the aggregate. Imposing emissions regs on them is therefore essentially punitive because it’s not meaningful insofar as public health and the “environment.”

But Uncle is nothing if not punitive. 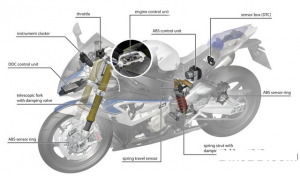 They are not only expensive as a result – especially to service, which most people can no longer do themselves, as with cars – they are anodyne. One EFI system is much like another. There’s very little in the way of tactile joy in plugging in a reprogrammed ECU – which is they way you “tune” a modern fuel-injected bike. Besides which it costs a fortune. A reprogrammed ECU is in the range of $400 – vs. maybe $15 for a set of jets for the Mikunis.

This is a problem, generally, for the not-old (or at least, the mot middle-aged) who prefer a hands-on experience as well as an inexpensive experience. So motorcycling is becoming the pastime of the old – and affluent.

The median household income of a motorcycle owner is now $62,200 according to stats compiled by the Motley Fool and 65 percent bring in more than $50,000.

That largely rules out the 18-24 crowd – Millennials – as a class. It’s not that they “don’t like motorcycles,” as asserted by some analysts. It’s simply that they can’t afford them anymore. And that makes it hard to like them anymore. 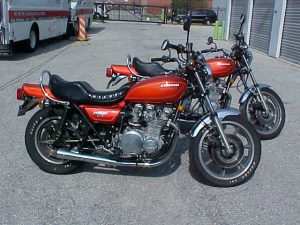 And so, they aren’t buying them much anymore.

In contrast, bikes built before the mid-2000s were likable and affordable. They were simple – at least relative to cars. Most service could be done by the owner – as was the case with cars in the long-forgotten past. This was attractive to people in their teens and 20s, both economically and otherwise. It is liberating – financially and psychologically – to own a machine that you understand and can fix yourself. It makes it yours in a way that a throw-way electronic appliance never can be.

A bond forms between man – and machine. 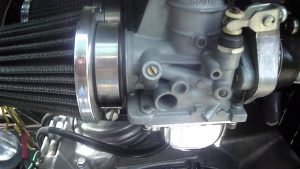 Interestingly, the market for pre-Uncle-ized bikes without all the crap – the cost and the anodyne joylessness – is doing just fine. The value of older bikes, free of computers and without catalytic converters and easily adjustable and fixable in the owner’s garage is going up – in parallel with a similar trend that can be discerned with older, pre-Uncle-ized cars. There is a small but growing industry that concerns itself with rebuilding cars from the ’70s and before to be used as daily drivers.

The government can continue to force-escalate the asking price of new bikes – and cars – but it can’t force people to buy them.

So long as there’s an alternative – a way to end-run Uncle – people will take it and do it. Which is why, in the end, Uncle will probably throw down the gantlet and simply outlaw the pre-Uncle-ized stuff, both cars and bikes.

If you think it can’t happen, better think twice.