There are countless articles out there about keeping your car going forever – or at least, for as long as possible. But what about motorcycles? What can you – should you – be doing to assure your bike stays problem-free? Here are some of the big ones: 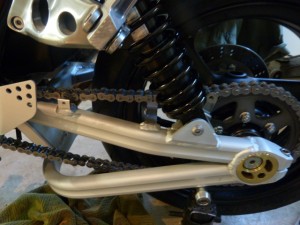 * If it’s water-cooled, change out the coolant at least every other year –

Overheating will kill a bike quickly, but it’s not just that. Failure to replace the old coolant on schedule will also lead to problems with expensive parts like the radiator. Until you’ve had to buy a replacement motorcycle radiator, you won’t have an appreciation for just how much coin that can entail. It’s just a small thing, to look at it. Maybe the size of a hardback book. How much could it possibly be? How about $400 – or more – depending on the bike? A killer expense if the bike itself is older and only worth $1,500 or so. Some water-cooled bikes also have a coolant filter that should be replaced periodically. And of course, be sure the thermostat is working and all rubber hoses are in good shape and not cracked or leaking.

Most water-cooled bikes will have a temperature gauge. Pay attention to it – and do something about it, if it starts to read abnormally. Be advised that many bikes require bike (and even manufacturer-specific) coolant. Hondas, for example, want pre-mixed Honda coolant – sold in blue bottles at the bike store. Don’t refill with generic coolant (made for car systems) unless you know it’s ok to use it. 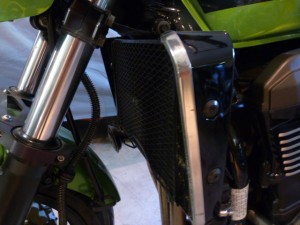 * Clean, grease and adjust the chain –

About once a year (more if you ride a lot of miles) it’s a good idea to remove the chain, clean it (kerosene’s good – gasoline isn’t) oil it and re-tension it. Regular cleaning will help the chain – and sprockets – last longer. Neither are cheap to replace, either – so for this reason alone it’s worth taking care of these parts. I put a new chain on my ’03 Kawasaki  ZRX1200 recently. $130 – on sale! But there are other good reasons to keep current with chain maintenance. A loose (or too tight) chain will reduce the performance of your bike. A worn-out chain could fail – damaging the bike. Or you – if the bike goes down with you on it because the broken chain got caught in the spokes of your back wheel. Chain maintenance isn’t rocket science – just messy. Most bikes come with the basic tools you need to do the job and instructions in the owner’s manual. 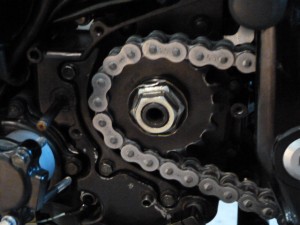 * Bleed the brake and clutch fluid once a year –

For safety reasons alone, you ought to bleed both brakes (front and rear; most bikes have separate systems, not like a car) and the clutch reservoir – if the bike has a hydraulic rather than cable-actuated clutch – at the beginning (or end) of every riding season. Keeping the fluid fresh will prevent down-the-road problems with sticking calipers/leaking seals caused by contaminants in the fluid – and also maintain the stopping performance of the system.

On bikes without ABS – which is most bikes – bleeding the entire system is really easy and can be done by almost anyone who possesses a few box wrenches (10 mm is the one you’ll probably need), some clear plastic tubing – and some patience. If you’ve never done any work on a bike before, this is a good place to begin. The parts you need to get at are in in easy reach; no special tools are needed – and the procedure is very straightforward. The main things to be sure about are that you  get all the air out of the lines – and that you replace the old fluid with the correct (usually DOT 4 – not DOT 3) fluid. The master cylinder top will tell you what to use.

Don’t use anything else! 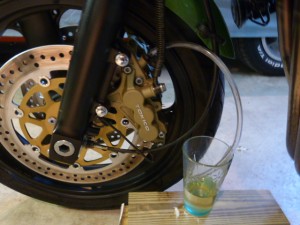 * If it’s a shaftie, check the axle fluid (and change it every other year) –

Shaft drives are even easier to neglect than chains – because there are no obvious moving parts. And also, because shaft drives are – usually – extremely durable and will outlast the bike itself. But abuse can shorten the life of a shaft drive assembly and one common form of abuse is running the thing low on lube. This happens over time as a result of seepage. And because there’s typically only a few fluid ounces of gear lube in there, it’s easy to run low if you don’t periodically check the level. In most cases, you do this by removing a large sight plug located on the side of the shaft drive casting. The gear lube level ought to be about even with the lower level of the opening, just high enough so that some will dribble out when you remove the plug. If it’s low, top it off (again, being sure to use the correct grade gear lube as specified by the bike’s manufacturer – not car gear lube).  Every 2-3 years, it’s also a good idea to drain the unit and fill it up with fresh fluid. This, by the way, is one of the absolute easiest maintenance jobs to perform – even easier than an oil change. Remove the drain plug, let the old lube out; reinstall the drain plug, fill with fresh lube, re-install the fill plug. Done! If there’s a grease fitting on the shaft, shoot some grease in there, too. 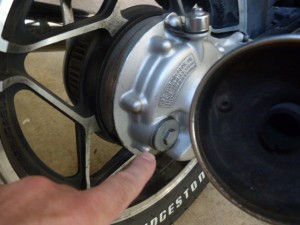 Some bikes have hydraulic (self-adjusting) valvetrains but most require periodic checking of the clearance – measured in fractions of an inch or millimeters – between the camshaft’s lobes and the tops of the valve stems. Over time, the factory-specified clearance decreases and too much pressure is exerted on the valves, which may cause them to remain partially open when they should be completely closed. Reduced performance – and increased wear and tear – will result. It’s very important to the bike’s long-term health to abide by the factory recommended check/adjustment intervals. And if the bike was bought used, assume the valves need to be checked and adjusted right now – unless you have solid evidence (such as a receipt from a dealer) that the work was done when it was supposed to have been done. Don’t take the word of the seller that it was done. It may not have been – and (or) it may not have been done right.

This job is more challenging, but not beyond the abilities of anyone who is willing to take his time, proceed carefully, use the right tools and procedures – and double check his work before putting the bike together.

* Keep fresh gas in the tank (and carbs) at all times – 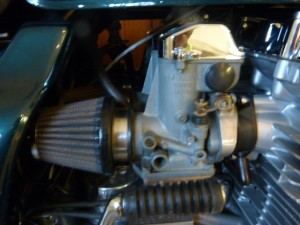 This one thing may be the single most important thing you can do to keep your bike running great – and avoid annoying (and potentially expensive) problems down the road. Most cars are used year-round, so fuel is constantly burned and replaced with fresh fuel. But bikes often sit for weeks – even months – at a time, especially during the off season. A bike that ran great when it was parked in late November might run like hell (or not run at all) come early April. The way to avoid this is to top the tank off with fresh gas – mixed with fuel stabilizer – prior to expected periods of not much use. Then try to run the engine – even if you don’t ride the bike – at least once a month during the off season. Start the engine with the bike on its center stand and run it through the gears; let it warm up fully – and burn through the gas in the carb bowls. Ideally, top it off with fresh gas (and stabilizer). Whatever you do, try to avoid just leaving the bike for more than a few weeks without running the engine – or riding  the bike.

Data for the Diapered