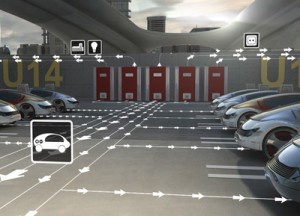 Vehicle to Vehicle communication – V2V, as its designers style it – is a system that will – that already is – automating new cars. Rendering them driverless. Putting the car in charge. Well, putting a wireless network in charge, that is. Of the cars – and the drivers. Who will shortly cease to exist – becoming curiosities of a bygone time, like railroad conductors.

The groundwork has already been laid. Every recent-model car has a computer. Almost all new cars have the ability to receive communication over a wireless network. The next step will be to link these cars to a grid – and to control them remotely and automatically.

That next step has been taken.

Earlier this summer, Ford showed off a new Taurus equipped with an early prototype of the V2V system. It “talked” over a wireless network to another car, avoiding a possible collision by alerting the driver to coalescing conditions (the unseen other car was about to run a red light). In this case, the driver was prompted to react by flashing lights on the windshield and a warning buzzer. V2V will eliminate the flashing lights and the buzzer – by eliminating the driver. Instead, the cars will talk among themselves as they hurtle down the road and coordinate their activities independently of the now-deadwood human occupying the left seat. When the car decides it is necessary to slow – or stop. The car will slow – or stop. 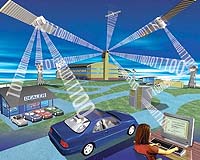 Some drivers already do. They have cars with “adaptive” cruise control that automatically accelerates or decelerates the car to maintain the pre-programmed following distance. Or Lane Departure Warning technology that snaps addled drivers back from whatever oblivion they’re in – alerting them to the fact that their car is about to run off the road or cross the double yellow. Lexus sells cars that parallel park themselves.

People – some people –  are going to love cars that do everything for them.

This is “our next evolutionary step . . .  to make sure (a) crash never happens in the first place – which is frankly the best safety scenario we can all hope for,” says National Highway Traffic Safety Administrator David Strickland.

I, personally, hope this system never sees the light of day. But then, I am someone who likes to drive. Someone who appreciates the art – the  expression of skill – that actually driving a car involves.  Unfortunately, most people do not appreciate art. Or skill. To them, driving is a chore – and a bore. They don’t have much skill. After all, it’s not expected. Most would rather be flapping gums on dey sail fawns. And V2V will, of course, provide them with more opportunity to do so. 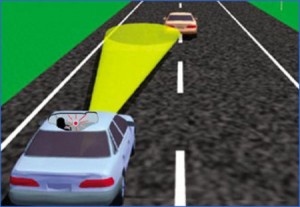 They, I suppose, are the we Strickland referred to. The people I refer to as Clovers. (See here for more about that – and them.)

“We think this is really the future of transportation safety (italics mine, again) and it’s going to make a huge difference in the way we live our lives,” crooned Scott Belcher of the Intelligent Transportation Society of America. The ITS has been tub-thumping for “intelligent” – read, controlled by someone other than you – cars and highways for decades.

And finally, at last, the moment is at hand.  They now “have the technology” – in the words of the old Six Million Dollar Man TV series.  It’s no longer theoretical sci-fi stuff. It is all very doable. And it will be done. In fact, this summer, 3,000 “pilot” cars equipped with a partially enabled, early version of V2V technology were put on the road in Ann Arbor, Michigan. The only thing holding back a national rollout is – wait for it, now – older cars that don’t have computers and/or the embedded technology to receive/send wireless communication.

Want to guess where this is all headed?

But why guess – when you can be told? Ron Strassburger, who is VP for safety (again, my italics)  of the Alliance of Automobile Manufacturers – an umbrella organization that represents (translation, lobbies) for the major automakers eructed that what’s needed is “for government to set standards.” Read: Mandates. The unfortunately eternal Clarence Ditlow of the Center for Auto Safety (yup, that word again) spells it out a bit more explicitly. “If you have the technology and the price has gone down so much, use it. You aren’t going to to get it into the marketplace as fast as you could and save as many lives (more italics mine)  as you could unless you mandate it.” 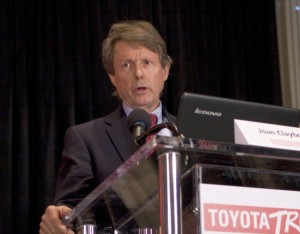 There you go. The future isn’t coming. It’s already here.

Drivers – and cars that don’t drive themselves – are on the way out.  It will be done. Because if it saves even one life… well, you know how this goes. The older stuff that requires a driver will, of course, be declared unsafe.

Cars that do not drive themselves will not be permitted to mingle amongst the cars that do. It will be regarded as an unacceptable risk, too dangerous for the safety of “our children.”

All of this has been in the works as an idea – as a control-freak wet dream – for literally decades. I can recall reading articles salivating at the prospect of taking the driver’s hands off the wheel as far back as the 1970s.  And I have always dreaded the moment, which I knew would inevitably arrive, when the technology would be ready – and enough of the public supine and passive enough to greet its arrival with a smile.

That moment is now.

Anything you’ve got in the garage that hasn’t got the necessary hardware (and software) to exist in the Brave New World of Motoring is on its way out – but not back on the road.