Pre-crime used to be a sci-fi literature concept. But it’s already our everyday reality. The fallout from the shooting in Tucson is going to make that very clear, very soon.

There was a time, long ago, when a driver had to actually cause an accident – or at least, do something tangible that gave evidence of actually impaired driving, such as weaving over the double yellow or limping along at suspiciously slow speed. This was the probable cause needed by a cop to pull the suspect over.

Then in the ’90s we got (courtesy of Clintigula) the criminalization of drinking – irrespective of our actual driving. The mere presence of trace amounts of alcohol in one’s blood became sufficient to arrest a person for “drunk” driving – even though all the person did was run afoul of a notoriously unreliable Breathalyzer machine.

It did not matter that people process alcohol differently; that some people are much better drivers even with a little booze in their systems than others are completely sober. And more besides.

Most people now equate having “x” amount of alcohol in your system – in ever declining percentages – with “drunk driving.” It is an epic victory of demagoguery and propaganda.

And it is also by definition an example of pre-crime. You haven’t done anything – but you’re in trouble because of what you might do.

Many readers will clamp shut their brains right about now and accuse me of defending mayhem and irresponsibility – which is proof they’ve bought into the pre-crime argument at the deepest level possible.

The merest potential connection; the flimsiest hint of possibility, no matter how tenuous or stretched. It’s now all you need to be regarded as having actually done something.

And to be treated accordingly.

Having implanted itself deeply in the American mindset, we shall soon see an expansion of the principle.

Soon, what will matter is what you think – and more, what others (those in power) think your thoughts might lead to.

To give voice to a sentiment such as “the government is corrupt and something needs to done,” will amount to evidence of advocating violence – perhaps even of committing violence – much as a motorist who has consumed an arbitrary amount of alcohol is ipso facto a drunk driver.

Consider: You are liable to arrest for “drunk driving” in America today even if you aren’t driving at all. You merely have to be in your car – even if you’re in the passenger seat and the car is parked. People who have had one too many and decided to sleep it off in their car have been arrested for DWI just the same as if they had been straddling the double yellow at 65 MPH with a gin and tonic in one hand and their left leg hanging out the window.

The courts have said that drinking “x” amount of alcohol not only defines “impairment” – it also amounts to intent to drive drunk, whether you’re driving or not. And that intent- imputed, perceived, ginned-up out of nothingness –  is what matters.

Is it really a great leap to imagine that political speech – hatriolic speech, as it is being styled – will soon be treated the same way? That to say or even to think  something – anything – that smacks of criticism of government and its flunkies will shortly be regarded as tantamount to shooting people?

Gun laws – and the TSA – already operate on this principle.

You have no record of criminal misconduct or mental illness. You’re a taxpayer, a responsible citizen. Yet in several states (and of course, Washington, D.C.) you’re assumed to have criminal intent, and thus, denied the right to own a firearm. If you possess one anyway – even if you have done nothing with it to harm or even threaten to harm another person – then you’re subject to being cuffed and stuffed just the same as if you had actually used it to threaten or harm others. 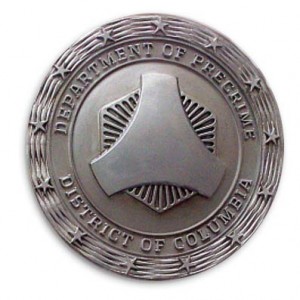 The TSA subjects people at random – and en masse – to rough and humiliating searches, including invasive physical pat downs, just like cops do to felony suspects. Not because of anything they’ve actually done or even hinted they may do but only because the TSA apes impute “terrorist intent” to anyone who desires to travel by commercial airplane.

Just like having a drink before you drive makes you a “drunk” driver – no matter how good your actual driving happens to be.

We’ve upended perhaps the most basic concept of Western jurisprudence – that for their to be a crime, or wrongdoing, there must be an actual criminal act, or wrongdoing.

But a society that embraced the tar baby of pre-emptive wars should not be surprised to wake up one day to find it is now also snuggling the concept of pre-crime – with all its consequences. God bless America. Land of the Free.