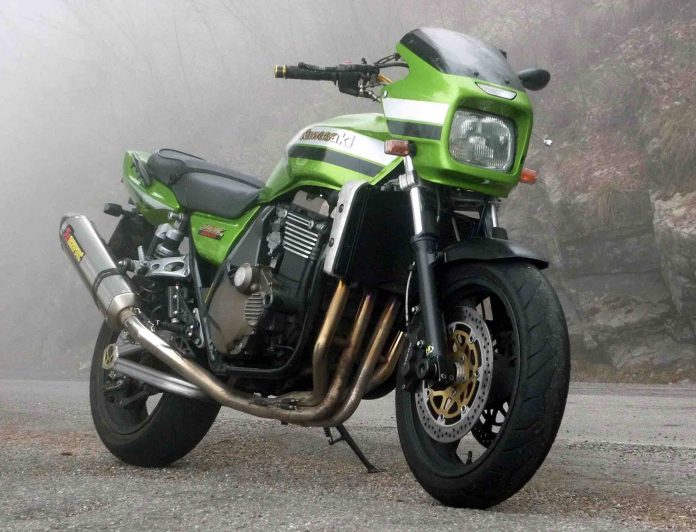 I started one of my bikes yesterday after it had been sitting for the past six months – the time it took for me to find the time to rebuild its front end.

Tap on – remember those? Choke set – remember that? The Keihins – carburetors! – drew breath. The 1200 cc inline four cleared its throat through pipes free of oxygen sensors and catalytic converters and 147 horsepower settled into ready idle.

My 2003 ZRX is now almost old enough to get its own learner’s permit. Seventeen years have passed since we met on the showroom floor and the day I did the thing I swore never to do – which was to buy a new motorcycle. 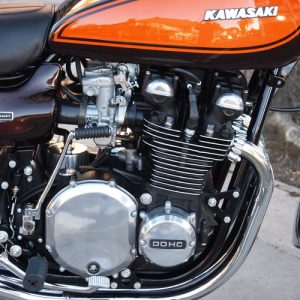 But I had to, this once.

903 (to be precise) cubic centimeters of DOHC aluminum air-cooled four, making a then-unheard-of 82 horsepower at 8,500 RPM – which gave the bike the ability to run the quarter mile in less than 12 seconds and achieve a top speed of nearly140 MPH.

For size, technology (it was the first dual overhead cam large cc bike offered for sale to the general public) or speed. It was quicker off the showroom floor than tubbed race cars that could barely hold an idle.

And which weren’t reliable. The Z1 could run flat-out for hours and not break.

The big Zeds – as they were and still are called –  dominated the street and the track like nothing before or since. There were fast bikes before the Z1, it’s true. The heavily modified BMW R69S that set the 24 endurance record for speed at LeMans in 1961 was one. Also the Vincent Black Shadow. And the monstrous two-strokes of the early ’70s, including Kawasaki’s own H series bikes, among them the infamous H2 750. 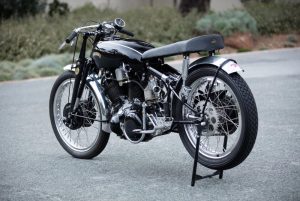 But the difference was the Zed was reasonably safe to ride fast – the H2 widowmaker wasn’t – and almost anyone could ride a Zed whereas you had to be a racer – or very rich – to afford a bike like the Black Shadow or a heavily modified BMW R69S capable of averaging 109.6 MPH for 24 hours straight.

The Zed could do that without mods. It made anyone a racer, anytime they felt like it. And you could ride it everyday, anywhere. It was a cross-country-capable superbike – and that was as much a first as its DOHC four and the performance it delivered.

And you didn’t need a racing license or trust fund to buy one, either. Just amble over to your Kawasaki store and sign the papers – which didn’t entail signing your life away. It only took $1,895 to ride away on a new Zed 900 – about $11k in today’s money and less money than the cost of a new 1972 Corvette – which cost twice as much ($5,553) and didn’t go twice as fast.

Or nearly as quickly, either. 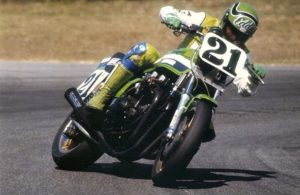 It was commissioned in the late ’90s to recall the Z1 and its iterations of the ’70s and early ’80s, most especially the green/white/black 1100 that Eddie Lawson rode to victory in the Superbike series.

It looked almost exactly like Eddie’s race bike – until you looked closer. Then you saw the radiator. The new bike was water-cooled, a necessary concession to its much higher horsepower. It had better brakes – and much better tires. But the engine was still a big DOHC four, unfaired – where you could see it.

At first, an 1100 and then – my bike – a 1200. It had the same – or similar – massive tube-aluminum rear swingarm and dual rear shocks, black-painted header and dual upside-right (non-inverted) forks. 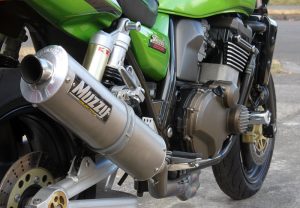 Four Keihins. No computer. A five-speed transmission. No electronic assists of any kind.

A big, brutal bike – just like its ancestor. You muscled it through the curves; its muscle raised the front wheel off the ground as you charged down the straights. A much higher top speed – especially when modded, as mine has been and which you can do just as easily, with hand tools, because (wait for it) no computer and no electronics – without the speed wobbles. 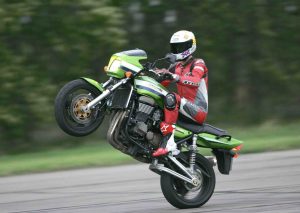 And I won’t ever sell it. That would be like selling one’s kid, almost.

The ZRX has become what my Kz already was when I acquired it – which is to say, old. In fact as well as spirit. The Kz is, of course, thirty years older. But the ZRX is itself almost 20 years old now and that make it almost as much a piece of history as the bike which inspired it. Because nothing new hasn’t got a computer, or upside-down forks, or cats or fuel-injection in place of the bellowing Keihins.

There is no choke to set; no tap to turn on, either. Not much to wrench. They just kind of are – like a cell phone. You have what you get.

The new bikes are faster – but aren’t fiercer. They do not send concussions echoing through the ages. They come – and they go.

They are nothing special.

The ZRX is irreplaceable.