Why are some people into motorcycles? 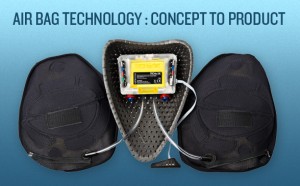 The answer, of course, is because motorcycles are fun – and affordable fun. And why are they affordable fun? To a great extent, because motorcycles are still free of government-mandated encrustations. They are arguably what cars would be today had government not got into the business of “engineering” them by legislative fiat: Highly efficient, super-light, powerful – and cheap and fun. $11k will buy you a brand-new sport bike capable of running a 9 second quarter mile, zero to 60 in less than 3 seconds and with a top speed over 180 MPH. Oh, and it gets 40-plus MPG, too. A fully loaded, top-of-the-line touring bike with heated seat and grips, GPS, great stereo (not that one really needs that on a bike), gorgeous chrome and paint, etc. – will run you about what you’d pay for a  basic compact economy car. In between are all sorts of bikes that offer more (or less) performance, better (or worse) gas mileage – and most important of all, the design features and equipment that bike buyers – not the government – think are desirable.

Which is why bikes remain so affordable.

This lovely state of affairs exists not because of government beneficence – some generous impulse to leave bikes alone as a last redoubt of transportation liberty. No, it’s only because so far it’s been technologically impossible to fit a bike with the Rube Goldberg devices that are now mandatory standard equipment in all new cars. Air bags, for instance. 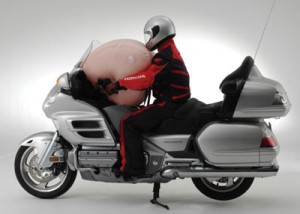 Well, that may be about to change.

There is an article in the just-out June issue of Motorcyclist magazine (see here) about air-bag riding suits being developed by Dainese and Alpinestars. Like any modern car, the suit is a suite of elaborate technology: multiple accelerometers and gyroscopes feed real-time data into a microprocessor, which can sense a crash and inflate the suit. The price for this elaborate technology is also comparable to the cost of the similarly elaborate technology in cars: $2,500. Or, about one-fourth the current cost of a top-line sport bike and about a third the cost of a standard.

Here’s how I expect this to go down:

At first, air bags on bikes (or in riding suits) will be optional – just as car air bags were once optional. Not many people will buy them – for the obvious reasons – just as very few people freely chose to buy air bags in cars when they first appeared.

Next, there will be an orchestrated PR juggernaut touting the “safety” of air bags on bikes (and in your suit). Very possibly, insurance companies will jack up the rates they charge for bikes without air bags – and riders who ride without air bag suits. And since the market mechanism that would ordinarily keep the insurance companies in check – the ability of consumers to say no to exorbitant, unjustified premiums – has been rendered inoperative, enormous pressure will be brought to bear on bike manufacturers as well as individual riders to embrace The Bag. 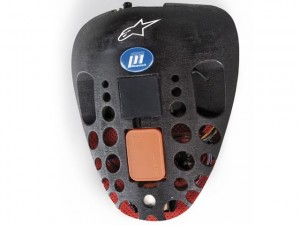 I know, I know. My paranoia is rising again. If only. In this America, “safety” trumps everything, including economics and individual liberty. Is it really paranoid to believe that this government will decide one day that it is “unsafe” for people to ride motorcycles without air bags – or without an air bag suit? That in the age of ObamaCare, it will not “do something” about “risky” behaviors such as riding a motorcycle without an air bag? Behaviors that might impose “social costs” on the great collective?

Oh, and don’t forget the other half of the equation: corporations. There is a lot of money to be made off bikers in the name of “safety.” And this time, unlike the way it went down at first with the car companies, the bike companies aren’t going to fight it. They will be doing all they can to push it. Instead of trying to convince reluctant bikers to buy $2,500′ worth of air bags – a deal few of them will sign up for – a mandate would force them all to buy in. 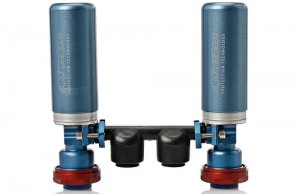 Think of the mark-up!

And the back end: A whole new “market” for replacement air bags. And the  money-making potential doesn’t end there, either. More rapid turnover – as formerly fixable bikes are thrown away (just as happens with air-bagged cars) and their owners pushed into buying a new one. On an easy monthly payment plan. Just like cars. As the price tag of “safe” bikes goes up, buying a bike in cash, outright, will go away – just as it has with cars.

More debt – more profit – all sold on the basis of “safety.”

Snuff the air, take a look around. Does any of the foregoing not jibe with what has already happened elsewhere? What is happening all around us? If you’d told someone 25 years ago that they would not be allowed to smoke in a public park – or that they would be forced to wear a helmet while riding their bike – they would have declared you a hysteric. If you’d told someone ten years ago that in order to board an airplane, in order to “keep us safe,” they’d first have to allow a stranger to fondle their crotch, you’d have been laughed out of the room. This is America, after all.

Enjoy your bike – and your next ride in a T-shirt and jeans. It’s going to be over very soon.