Why can’t all states have turnout lanes?

Well, they can of course – but most don’t. Somehow, the simple solution of providing extra room on the shoulder of a two-lane road to let faster-moving cars safely and courteously get by slower-moving cars is not high on the To Do list of state highway authorities.

One of the few exceptions is rural Texas – where most secondary roads have turnouts – and (even better) it’s an embedded part of the driving culture to use them for their designed purpose. When you come up on a car – or pick-up full of hay – that’s dawdling along at 15 MPH below the posted limit, it’s not necessary to peer eagle-eyed into the distance, waiting for an opportune moment to risk a fly-by (and hope you make it before that oncoming semi closes the distance).

Instead, the driver of the slow-moving vehicle will actually look into his rearview mirror, notice you are there – and pull off to the side at the first turnout to let you get by. This is usually accompanied by a friendly wave – given and returned, a gesture of road-trip goodwill.

If this became standard practice across the land, driving would be a lot less stressful. And a lot safer, too.

Attempting a conventional pass – even where perfectly legal – can be scary. You’ve got to judge the time, distance and how quickly your machine can make the jump. Some drivers have a better sense of this than others. Sometimes, you’re the second or third car in line behind a Slo Mo. The two drivers ahead of you are only marginally more skilled than the head Slow Mo at the front of the conga line.

Even if you’re a great driver in a fast car, when you’re stuck behind a not-so-skilled one up ahead who needs a half-mile of free and clear before he’ll even think about making the attempt, getting around the dawdlers can be a challenge. The fingers drum, the blood pressure rises – until finally, there’s an opening. You punch it and attempt a full-fury pass of both the cars immediately ahead as well as the head Slow Mo.

If only the Slow Mo had just pulled off into the turnout… .

If only there was a turnout!

Even when it’s not quite so extreme, most passing maneuvers on secondary roads require temporarily violating the posted maximum speed limit – at least, to execute the move safely. If you’re doing 55 and the car impeding you is doing 50, a “legal” pass is going to take much longer than the space you’ve got to work with. So, of course, you floor it and run up to 70 or so in order to get by. The pass attempt is much safer – but you’ve run the risk of getting a piece of payin’ paper instead. If there’s a cop around, you’ll get the ticket. Not the Slow Mo who’s impeding the flow of traffic – even though this is also illegal.

None of this is any good. And the problem could be solved if turnouts were built into the shoulder of every major road – and people were drilled to use them, as they are In Texas.

That – and using the rearview mirror for something other than squeezing a zit or checking out run-amok nose hairs – would do more for enhancing road safety than all the sobriety checkpoints, seat belt harrasment campaigns and “Smooth Operator” speed enforcement dragnets combined.

But it’ll never happen – because there’s no money in it. 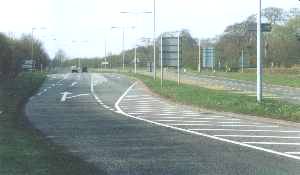