There it is up ahead. A Ford Crown Victoria. Better get on the brakes!

But is it really a cop?

Or just an old coot?

There are – mostly – only two kinds of people who drive the Crown Vic: Old people – and cops. Knowing which one’s behind the wheel can save you aggravation and tickets, too.

* The cop car will have cop stuff on it –

They’re sneakier than they used to be – courtesy of things like low-profile light bars, stubby antennas and so on – but it’s still a dead giveaway if you spot a Vic with multiple antenna mounts or see wig-wag lights hidden in the grille or on the rear package shelf.

Other telltale signs include blackwall tires, a pusher bar on the front end, spotlight mounted by the driver’s side window, a plexiglass barrier between the front and back seats and unusual licence plate numbers, like LE-123A. If you get close enough, the cop version of the Vic can be identified by the “Police Interceptor” badge on the trunk lid. (Not all Vics used by cops have this, but many do.)

AAA bumper stickers are a sure sign you’re safe. Only people over 60 are members of AAA nowadays. Also political bumper stickers; these are not allowed on cop cars. If you see the “COEXIST” sticker, you’re a-ok. Ditto anything about someone’s kid.

Civvy versions of the Vic will also usually have whitewall tires with fake wire wheel covers (definitely not a cop) as well as more chrome trim. Overall, if it looks like something grampa would drive, there’s probably a grampa behind the wheel. Cop versions of the Vic just look more serious and menacing. They tend to be primary colors, too – like all white, or dark blue. Green and garnet red metallic seem to be popular, too.

If you see a Vic and the driver’s a younger male with a buzz cut, it’s a cop as sure as Clay Aiken chugs cock. It is rare in the extreme to see a Vic driven by a young guy (45 or under) who isn’t a lifetime member of the Bacon of the Month Club. Slow down, pronto. Also be wary of diesel dykie-looking women with short haircuts. Swine comes in both male and female forms, so don’t forget the sows as well as the boars.

* The coot car will have a coot behind the wheel –

Often, all you’ll see is the crown of a balding, liver-spotted head – or the Blue Haired Summit of a Mamie Eisenhower look-alike. Look for bony, palsied hands death-gripping the very top of the steering wheel. Often, there’s more than one coot in the car. If the person behind the wheel is clearly over 60, it is virtually certain it’s not a cop since they retire them sooner – or take them off traffic duty. You’re in the clear, so floor it.

It won’t be doing 12 mph below the speed limit, or braking over-hard and for too long at the slightest bend in the road. It won’t wander across the double yellow, then jerk itself back into the right lane. It will be tucked off by the side of the road, or squatting in one of those dugouts in between divided highways. If it’s not where it ought to be – which means, anyplace your grammy or grampy wouldn’t be – be suspicious.

Or fart-ess. Wandering across the center lane divider; going excessively slow. Moving, in other words, like a bug after you stomp it enough to cripple it but not hard enough to kill it. You’ve got nothing to worry about – except that maybe the old coot will run through a plate glass window and pin your legs between its bumper and Doritos rack at 7-11.

Know your coots – and your cops – and you’ll keep in the clear! 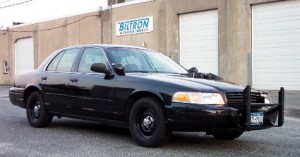