Maybe you’re like me and like trucks but don’t need a super sized truck. But you don’t want one that’s too small, either (that would be Ford’s Ranger, the only true “compact” truck left on the market).

If that’s the case, you’ve got three trucks to choose from: Nissan’s Frontier, the Chevy Colorado (and its corporate twin, the GMC Canyon) and the Toyota Tacoma.

These are the Big Three of small (but not too small) trucks.

This review will cover the Tacoma. Let’s see how it stacks up against the others.

The Tacoma’s a slightly larger than compact truck – a notch bigger than a Ford Ranger and a tad smaller than a Dodge Dakota. It’s sold in regular cab, extended cab and crew cab bodystyles, with five or six-foot beds and 2WD or 4WD.

Main rivals are the Nissan Fontier and the GM twins – the Chevy Colorado and the GMC Canyon.

AC is now standard even on base work truck trims and buyers can order the 2.7 liter four-cylinder engine with an automatic transmission. Minor styling updates to the grille and front end have been done, too. Two new off-road packages – TX and TX Pro – have been added to the options list. The TX package includes black powder-coated wheels, M/S-rated all-terrain tires and tubular side steps. The TX Pro adds a high-performance cat-back exhaust system to the mix.

Big enough to comfortably carry people as well as stuff.

Not so big it hogs all the space in your garage.

Back seats still a tight squeeze for people – and bed is still no bigger than a compact-sized truck’s. (Ditto the Frontier and Colorado/Canyon).

Storage cubbies in bed don’t have a keyed lock; neither does the tailgate.

Four cylinder’s power is marginal; mileage is mediocre (and 3-5 MPG less than in a true compact truck powered by a four-cylinder engine, such as the Ranger.)

The 2.7 liter engine is now available with a four-speed automatic in addition to the standard five-speed manual transmission. An important thing to note here is that Toyota lets you buy 4WD with the 2.7 liter engine. In competitors such as the Nissan Frontier, you have to upgrade to the V-6 engine if you want 4WD.

The Tacoma’s optional V-6 is available with either a six-speed manual transmission or a five-speed automatic.

Only the V-8 powered versions of the GM pick-ups can beat this performance.

On the other hand, the four-cylinder version of the Tacoma – especially if it’s ordered with the automatic transmission and 4WD – is exactly the opposite. Expect Prius-like acceleration and 0-60 times in the 10 second range.

Gas mileage with the four, 2WD and 5-speed stick is pegged at 21 city, 25 highway. That drops to 18 city, 21 highway with automatic transmission and 4WD – almost exactly the same as you’d get if you ordered the 4.0 V-6 and six-speed stick.

Only you’ll also get an extra 77 hp and a more enthusiastic 0-60 time.

With the automatic and 4WD, EPA rated gas mileage for the V-6 Tacoma is 16 city, 20 highway.

The Tacoma has two distinct personalities depending on which engine/transmission combo you go with.

V-6 equipped versions are sports car quick. Literally. The Tacoma with V-6 power will outrun a Mazda Miata, 0-60. It’s also a dead heat (and might be slightly quicker, depending on whether you go with stick or automatic and 2WD vs. 4WD) vs. the Nissan Frontier, even though the Nissan’s 261 hp V-6 has 25 more hp than the Tacoma’s 236 hp V-6. That’s because the Nissan’s also about 300-400 lbs. heavier than the Toyota, which cancel’s out the Frontier’s horsepower advantage.

To get quicker, you’d need to go with the optional V-8 in the Tacoma’s GM competition. Those trucks, when equipped with the 5.3 liter V-8, can get to 60 MPH in under 7 seconds. But their MPGs are also mired in the mid-low teens (14 city) and they still can’t pull as much as the Tacoma can.

Four-cylinder versions are a mixed bag.

On the upside, it’s nice that Toyota doesn’t make you buy the V-6 in order to get 4WD – as Nissan does with the Frontier.

On the downside, 159 hp is on the very edge of “adequate” in 2WD versions of the Tacoma, which weigh in at 3,250 lbs. Adding 4WD increases the curb weight to 3,665 lbs. which is 400 pounds more – and 400 pounds too much for a 159 hp engine to deal with comfortably. Toss in the automatic transmission and the truck now weighs 3,720 lbs. – and that’s before the driver climbs in. Add him and a passenger and the Tacoma’s well over 4,000 lbs.

Now you know why Nissan doesn’t sell the a four-cylinder, 4WD version of the Frontier.

My recommendation: If you need 4WD, go ahead and buy the V-6 to go with it. You’ll be much happier and probably the gas mileage will end up being about the same anyway.

If you don’t need 4WD, the 2WD version of the Tacoma can be an economical runabout. With the five-speed stick, it’s fun to drive, too.

Personal note: I own two of the older (smaller version) Nissan Frontiers, one with 4WD, one with 2WD – both with the four-clinder engine and manual transmission. I thought I needed 4WD when I got the first truck, but the truth is the 2WD truck does 99 percent of what the 4WD truck does – and the other 1 percent of the time, I just stay home.

Unlike current 1500 series full-size trucks – which have all adopted the Body Builder Look – current mid-small trucks in the Tacoma’s class each have visually distinctive appearances. The Frontier’s the most traditionally styled; it’s boxy, upright and Tonka-like. The Colorado and Canyon appear to be trying for Most Macho. The Tacoma’s a nice mid-point. It’s manly but not trying too hard to be.

It’s nice that the Tacoma is available in three different cab configurations – including a basic work truck regular cab version. Not everyone needs the extended cab – or the extra length (and cost) that comes with it.  The Tacoma regular cab’s base MSRP of $16,365 is almost $1,400 less than Nissan wants for the least expensive version of the Frontier, which isn’t offered in regular cab form. At least you get the extended cab for the extra $1,400.

What’s really surprising is that the regular cab version of the Chevy Colorado also starts at more than $17k – some $700 more than the Tacoma regular cab.

The big upside to a larger-than-compact truck such as the Tacoma is there’s now Business Class room for front seat occupants – even if the back seats (extended and crew cab versions) are still Coach (or UPS) class.

Compare the Tacoma’s stats to the compact-sized Ranger’s (the last true “compact” truck still on the market): There’s almost four inches more cabin width (shoulder room) and nearly an inch more headroom. And with the extended or crew cab, you’ve got more usable driver/front seat passenger legroom because you don’t have to scrunch the seats all the way forward to make the back seats plausibly usable for people.

It’s just too bad you don’t get a bigger bed in the Tacoma (or the Frontier or the Colorado/Canyon). The Tacoma I test drove had the same size (six-foot) bed as my 1998 Frontier, a true compact pick-up.

Overall I like the Tacoma a lot. It has just a few small flaws that Toyota could – and should – fix.

The first has already been discussed at length; the standard four cylinder engine needs another 20 horses or so. Not just because it has a case of The Slows. It also uses too much gas – because it’s working too hard. My older four-cylinder Frontiers (or the current Ford Ranger) can get close to 30 MPGs on the highway. That’s a lot better than a V-6 (or V-8). But the current Tacoma’s four is only slightly more fuel efficient than the V-6 version, which is sad.

The second issue is the unsecured storage cubbies built into the sides of the box (inside side). These need keyed locks. It’s great to have the storage; worthless if anyone can just reach in and snatch what’s in there. I’d also like a keyed lock for the tailgate (the Frontier has this feature). Tailgate snatchers are just itching to relieve you of your tailgate when your truck’s left unattended.

There goes probably $1,500 or more for a replacement – all because the truck didn’t have a $10 keyed lock.

I’m a Nissan guy and I’d like to say the Frontier’s the best truck in this class, but overall I’d have to give the crown to the Tacoma. It costs the least – and tows the most. There’s a body/bed/drivetrain/equipment combo to meet almost any need – and want. Granted, the Colorado/Canyon have hairy V-8s, but they don’t offer more capability and they’re not nearly as nice/refined as the Toyota. And they definitely don’t have the Blue Chip rep the Tacoma’s got. The Frontier’s a nice truck, but not everyone needs an extended cab or wants to pay $$$ up front and $$$ down the road for a V-6 they don’t need to get the 4WD they do.

Which leaves the Tacoma standing alone in the spotlight. 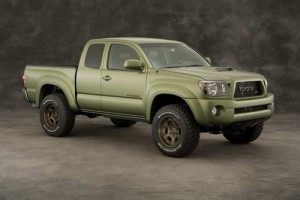 Reader Question: Buying a Classic Car to Drive Every Day?