It wasn’t too long ago – the 1990s – that economy car was a polite marketing euphemism for pathetic losermobile. Economy cars were mostly miserable; sad-looking and underpowered. Tinny, plasticky, embarrassing little drones whose only virtues were the cheap price and the good gas mileage. As soon as you got one you wanted to get rid of it.  You drove one because you had to. Or because you needed cheap/basic/bare-bones transpo.

Never because you wanted to.

That’s not how it is anymore – and the Kia Forte is a case in point.

It replaces the Spectra, a car that was an “economy car” in the fullest, smelliest sense of the term.

Prices start at $14,995 for the base LX sedan with a manual transmission and run to $19,395 for the sport-themed SX with automatic. The new five-door hatchback EX version starts at $16,895.

The five-door hatchback sedan is new for 2011.

Best warranty coverage on the market.

Fuel Economy Package upgrades (such as the more aerodynamic exterior; more on this below) should be incorporated into standard features.

With so many excellent cars in this segment, Kia will have a tough time pushing its way to the front of a very crowded – and very competitive – field.

One of the Forte’s fortes is power. Even the least expensive LX versions come standard with a 156 hp, 2.0 liter four-cylinder engine. (For comparison, a Toyota Corolla’s standard 1.8 engine is rated at 132 hp; a Honda Civic’s standard 1.8 liter engine at 140 hp.) It is among the most powerful standard engines you’ll find in a car costing under $15k to start.

The 2.0 liter engine is offered with either a new-for-2011 six-speed manual or (optionally) Kia’s six-speed “Sportmatic” automatic, with driver-controllable shifting.

Gas mileage is 22 city/32 highway (manual versions) but you can notch this up to 27 city/37 highway if you buy the optional Fuel Economy Package, which includes low-rolling-resistance tires, electric-assist power steering, low-drag alternator, the six-speed automatic and a more aerodynamic exterior to cut down on wind resistance.

SX models get a larger, 2.4 liter engine that delivers 173 hp. It comes with either manual or automatic transmission, too.

The Forte with 2.0 liter engine and six-speed manual can reach 60 mph in just over 8 seconds; automatics are 2-3 tenths of a second slower.

The new six-speed automatic fixes the one are where the Forte had a case of The Cheaps when it came out last year – saddled with a four-speed automatic that was as dated as Vidal Sassoon jeans and boom boxes.

Kia fixed this, muey pronto – and it shows in the ’11 models’ quicker acceleration and improved fuel economy, as well as much improved overall driving feel now that the shifts are snappier and there’s less RPM drop between each gear change.

Models with the 2.0 liter engine accelerate as well or better than other cars n this class/price range – and the SX with the 173 hp engine is as quick 0-60 as a Mazda Miata (really).

The Forte’s ride is softer and more isolated from the road than the typical economy car’s – a desirable feature for most people, who probably aren’t looking to throttle-steer through corners as much as they are looking for a quiet, comfortable ride.

As a commuter or highway cruiser, it’s one of the best available small cars going – in my opinion. Some reviewers have faulted the Forte for excess body roll and less than razor-sharp steering – and this is true, if you drive it like a high-performance sports car, diving into corners at 20 mph over the posted speed limit. But most people don’t drive this way; even fewer drive cars like the Forte this way. High-performance corner-burning is not what this car is about – because it’s not what it’s supposed to be about. There are Civic Si’s and Sentra SE-R’s for that.

It’s hard to tell from looking at it that the Forte is Kia’s least expensive model. It’s a pretty large car for a compact – and there are several un-economy car details such as the compound curves of the front quarter panels, which arc upward near the joint at the base of the windshield (the “A” pillar) to meet an upward swooshing front door sill. Ok, so the front end has some obvious Civic-inspired hints to it. But there’s nothing wrong with borrowing a good look if you do a good job borrowing it.

The interior’s big selling point is its roominess compared with competitors. For example, the Forte has more front and rear legroom and headroom than the Corolla and Civic). You could buy a Nissan Versa 1.6 and get more backseat room – including about three inches more rear seat legroom – than all of them for around $11k with AC. But the Versa 1.6 is as basic transportation as basic transportation gets. It doesn’t even come with a radio. You’ve gotta pay extra for that. Seriously. Meanwhile, the Forte comes standard with a pretty decent MP3-playing stereo with Sirius satellite – as well as AC and Bluetooth wireless connectivity. Plus full gauges. Etc.

Lots of trunk space, too. Almost 15 cubic feet – which is significantly more than the Civic (12 cubic feet ) and the Corolla (12.3 cubic feet). The Forte’s trunk number also beats the price-busting Versa (13.8 cubic feet).

Kia must feel confident about the quality of its cars because it offers the most comprehensive and generous warranty coverage in the business: Ten years/100,000 mile powertrain (engine and ad transmission) warranty – and that is indeed a fine thing. But even finer is the 60,000 mile (and five year) coverage on the whole car, wheels to roof.

This is nearly twice the coverage Toyota and Honda offer (three years/ 36,000 miles). Which is worth more to you – the “name” that comes with a Toyota or Honda? Or the sure knowledge that if something breaks or fails or otherwise causes you grief for the first five years and 60,000 miles of ownership, it’ll be Kia’s problem and not yours?

It’s easy to miss out on cars like the Forte because of the way people reflexively think “Honda” or “Toyota” when they start thinking about a new economy car. That’s too bad, because the Forte’s got a lot they don’t offer – or offers it for a lot less.

Which in my book, makes it worth a look. 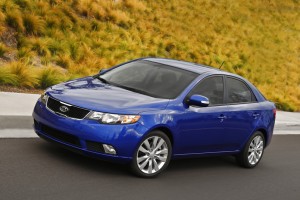