(I did this write-up 10 years ago… feels like yesterday!)

The last time I got my hands on one of Ford Motor Co.’s competition-only Mustang Cobra R models was back in 1995. I put more than 1,000 miles on it three days – including a midnight run to New York City from Northern Virginia that took a little over two hours and included the echo-plex effects of a 300 hp 351 V-8, dual exhausts and a buried speedometer deep in the bowels of the I-95/Baltimore Harbor Tunnel.

For those not in the know, the Cobra R model is a purpose-built yet still street legal race car that Ford assembles every 3-5 years. It is based, loosely, on the mass-produced Mustang GT and put together by a small group of dedicated motorheads within Ford at an outfit called SVT – Special Vehicles Team. SVT products include the “street” version of the Cobra (without the “R” designation), the F-150 Lightning and the SVT Contour.

Cobra Rs are produced, according to SVT honcho John Coletti, “to show the world what Ford can do – and what the Mustang is capable of in ‘ultimate’ form.” There’s also the incidental object of beating the bow-ties off Chevy Camaros and Corvettes at the race track – a special interest of Coletti, who was also the Ford exec. responsible for the current bodystyle production Mustang that first appeared in 1994. He’s a Mustang guy to the bone – arguably responsible for saving the car at a time when many within the company had lost faith and wanted to kill it or (much worse) turn it into a FWD knock-off of the Probe.

Now, the ’95 Cobra R I Steve McQueened my way to NYC in was pretty fast -an arctic white bullet packing the last 351 ever installed by the factory in a new Mustang, teamed up with a meaty Tremec 5-speed gearbox and nothing bolted to its lightweight chassis that detracted from the pursuit of hauling ass. No air conditioning, no radio, no back seat – not even the usual sound deadening and insulation applied to most production cars to quiet them down. The heat from the headers seared the floorpans and turned the interior of the stripped-down car into a 150-mph sauna. I know it, because I did it. No cop, no stop – right?

But the intervening five years have seen some remarkable upticks in what’s considered “fast” – always a subjective thing in an ever-changing and dynamic automotive universe. Yes indeed, the 1995 Cobra R was a road king in its day… but that day has passed.

What I’m rambling about is the the 2000 Cobra R, which I just got done throwing around the track at Summit Point Raceway in scenic (some say toothless) Summit Point, West Virginia. The 2000 Cobra R, as Coletti is happy to explain, outclasses the ’95 model in every way, beating it like Ali in his prime might have brain-smashed a bacon-addled George Foreman. It is quicker, faster, handles better and stops more capably than any Mustang ever built, he says. I drove the car – and have zero doubt that what he says is dyno-proven gospel.

Just 300 of these raucous, 385-hp (probably closer to 400) machines will be built – each armed with the first ever use of a close ratio six speed (Tremec-built) gearbox in a Mustang – as well as the first use of the large displacement 5.4 liter version of Ford’s “modular” overhead cam V-8. (Both regular production GT and non R-model street Cobras use the smaller, 4.6 liter version of the same basic engine.)

Coletti is hoping to demonstrate to the gearheads of the world that Ford’s modular OHC V-8s are excellent performance engines – potentially better, in terms of power output, adaptability, ease of modification, etc., than the old 5.0 liter/302-cubic inch OHV small block V-8 that Ford fanatics revere – and for which there is a treasure trove of aftermarket “speed” parts available.

The tremendous specific output of the 5.4 Cobra R engine (better on a per- liter basis than either the Corvette’s LS1 5.7 V-8 or the Dodge Viper’s honkin’ 8-liter V-10) is an indication, says Coletti, of the potential of this engine. He notes that even though the Cobra R is a full-competition car, intended to be raced, the 385-hp engine is “both fully emissions compliant, street legal, and very mild-mannered given what it can do.”

And what it can do is propel the Cobra R to 175-mph and through the quarter mile in the high 12-second range. That, friends, is fast – by any standard, for any era – including the height of the 1960s “muscle car” period. Yet it doesn’t idle like a Maxwell House coffee can full of loose nuts and bolts, refuses to overheat – and could probably be driven in grinding, rush-hour traffic without spitting its pistons through the crankcase.

I count myself among the very fortunate few who’ve had the chance to shriek down a straightaway at 130 mph in one of these things, bracing myself as the 13-inch Brembo discs glow red hot dissipating momentum for the hard right turn and series of “sweepers” at Summit Point.

The suspension is capable of 1.0g of lateral grip – a level of stickiness that has to be experienced to be understood in any meaningful way. Suffice it to say, the car can barrel through corners at 80-mph that really good sports cars would have trouble dealing with at 60-mph. You can lean on it harder than the FBI did on Sammy “the bull” Gravano – and it won’t knuckle under.

Aside from the engine and transmission stuff, there’s also a Gerodisc hydromechanical differential with speed and torque sensitivity that uses hydraulic pressure to apply and release the clutch packs; this helps the hardened halfshafts of the Cobra’s independent rear suspension manage the engine’s torque output and keep the car from fishtailing wildly like a gill-hooked 25-lb. largemouth bass.

The only things missing insofar as track-ready stuff goes are three-point harnesses and a “Ford” embossed racing helmet. That’s all you’d need to enter this car in a competitive event.

Ironically, Coletti himself notes that the majority of these 2000 Cobra Rs will in fact never be raced. “They’re too rare, too collectible. Why would you subject a car like this to racing, when you could build one just like it and not ruin a valuable collector car,” he says.

That’s pretty much what happened with the ’95 Rs – most were quickly snatched-up by collectors – who pamper them in climate-controlled garages and take them to shows – and maybe every now and again run their rare Mustangs on a road course during a club event.

At first muse, it may seem silly to build and sell a race car that few will race. But Coletti understands that the mere existence of the Cobra R is a testament in steel to the passion of Ford Motor Co. – an explicit expression of what the company is about, and what kind of people work there. In other words, “car guys.” And car guys know that you sell ordinary production vehicles by getting people excited about the rare and unique stuff that the company puts together. The “halo effect” of extreme machines like the Cobra R helps sell regular Mustang GTs – and builds that oh-so-important reputation/legend that can carry a carmaker through the rough spots.

Remember the dismal days of the 1970s? When the Mustang had de-evolved into a pathetic, Pinto-looking, V-6 powered “King Cobra”? Well, it was the lingering memory of Boss 429s and Super Cobra Jet 428s that kept the Mustang’s reputation alive, even then. Whatever the future holds, people will remember the 2000 Cobra R. You and I may never have one parked in our garage. But just knowing they’re real – and out there someplace, sucking gas and hauling ass, makes us feel pretty good. And that’s pretty much the whole idea, says Coletti.

Neat guy – but the car is even neater… . 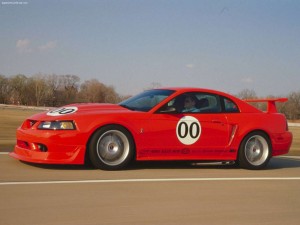