You can avoid being felt-up or scanned (for now) if you avoid flying, but that doesn’t mean you’re not subject to similarly random – and just as intimidating – random stops out on the road.

As the holidays approach, your local police will likely be stepping up the use of “sobriety checkpoints” – and random stops/ID checks/interrogations under other names, too.

You’ve probably not done anything wrong, or even given reason to suspect you might have – but that doesn’t mean they can’t stop you, force you to identify yourself, produce your “papers” – or try to interrogate you as to where you’re going and whatever else they feel like knowing about.

The Supreme Court has ruled they can do all that. But – for now – that is all they can legally do to you. A few tattered shreds of your former right to be free from unreasonable searches still remain. You should know where the line is – what they can force you to do vs. what you don’t (yet) have to submit to:

If there’s a random roadblock up ahead, you’re stuck. If you turn around or try to avoid the checkpoint, they’ll not only go after you – you’ve likely given them “probable cause” to search you and your vehicle instead of just interrogating you and making you show them your “papers.”

* You don’t have to answer their questions –

If the cop asks you where you’re headed, you have the legal right to decline to answer. “I’d rather not say,” or “I prefer not to answer” are examples of lawful, within-your-rights responses to such queries. It will surely annoy the cop, but legally speaking,he has no authority to press the point.

* You do have to identify yourself –

The courts have ruled that the cops can demand ID of anyone, anytime they are out in public – and that you must comply with such a demand, even if you haven’t done anything illegal or even given reason to suspect you may have. It’s completely Soviet, of course – but that’s the nature of modern America. You should therefore hand over your ID and remain quiet and calm. If the cop asks whether that’s you on the ID, confirm your identity. But say no more.

* You don’t have to let them search your car –

Cops will often ask whether you have anything “they should know about” on your person or in your vehicle. Then they will ask whether you mind whether they “take a look.” The way it’s phrased sounds gentle enough but it’s very intimidating coming from an armed authority figure shining a light in your face, with all the implied threat that conveys. Many people cave in and say, go head. Even if you have nothing to hide, you should never give consent to a search of your person or vehicle. Not only is it an affront to your dignity and an assault on your most basic rights as a human being, it’s a fact that some cops are corrupt and more than a few have been caught (later) planting “evidence” in people’s cars, such as a small amount of pot – in order to seize the vehicle under asset forfeiture laws.

Bottom line: Be respectful and avoid being confrontational, but don’t willingly give up your rights, whatever’s left of them. 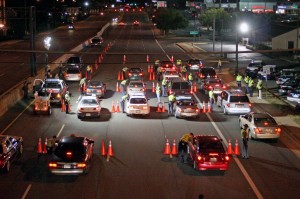