The mid 1970s were a weird and dangerous time for the American car industry. It had to turn on a dime – literally – and figure out how to “compete” with Japanese automakers who had no problem dealing with the sudden uptick in gas prices caused by various OPEC oil embargoes because all they sold at the time were small cars. Detroit, meanwhile, still had mostly traditional-sized, body-on-frame behemoths conceived in the ’60s that assumed ’60s’-era conditions would last much longer than they did. Since they couldn’t just throw away the cars they had, they had to figure out a way to make the cars they had work under the new regime.

A prime example of this is the short-lived Laguna series, which ran for just three years between 1973 and 1976.

The Laguna was named after the California race track (Laguna Seca) and was essentially a modified Chevelle with GM’s attractive Colonnade styling defined by a sporty-looking, forward-raked “B” pillar and fixed glass rear quarter-window that fed back into a fastback roofline.

The Colonnade look was actually a clever solution to a very real engineering problem: How to impart sufficient structural strength to a coupe’s roof so as to meet the federal government’s new (but never implemented) roof crush standards.

The Laguna also had a unique front end treatement with one of GM’s first fully integrated front fascias. Instead of the usual bolt-on bumper, the Laguna had a wraparound front clip made of color-matched flexible urethane plastic – GM called it Enduraflex – which integrated most of the formerly separate front-end items into a single unit. This presaged the design ethic that would become industry standard by the late 1980s, when bolt-on chrome bumpers were relics of the automotive past. But in ’73, the “monochromatic” look was highly unusual and the Laguna really stood out.

Inside, Chevy borrowed the Monte Carlo’s swiveling front buckets (bench seats could also be ordered) and boasted nicer materials and trim unique to this model. The gauge cluster was a semi-wraparound design, with all the controls oriented toward the driver.

A sharp-looking center console (with the buckets) canted forward, as if ready for action. And unlike the pony cars, a Laguna’s interior was a rumpus room of open space. Even six-footers could occupy the rear seats – which are mostly unendurable in modern sporty coupes.

V-8 power was standard, too – which put the Laguna a notch above the econo-oriented Malibu (which came standard with an inline six) and just under the still-potent SS Chevelle.

Chevy management probably realized that the SS would soon be gone – and rather than keep the SS name on a gelded Chevelle, turned to the idea of the new Laguna as a kind of euro-themed American GT. It would still be big – and reasonably powerful – but not so over-the-top that survival would be impossible in the era of high-priced unleaded regular and catalytic converters.

It may not have been an LS5 SS 454 Chevelle – but it was close enough to keep the fires burning during a very dark period for the American auto industry.

Indeed, Chevy retired the Chevelle SS the following year, leaving the Laguna – which was now called Laguna S-3 – as the division’s only heavy-hitter. Sedan and wagons versions had been dropped – or rather, transferred back to the regular Malibu lineup.

For the final two years of its short life, the Laguna would be offered as hardtop coupe only.

It was during this period that the car came into its own as a kind of showroom stock stock car. A striking new shovelnose front end treatment (along with the distinctive side louvers for the quarter windows and 15×7 Rally rims) gave it a 150 mph look standing still. It seemed ready for Talladega as it sat – just add window netting and “76” decals on the door. And indeed, the actual stock car versions did very well on the super speedways of NASCAR – until NASCAR outlawed them!

Street versions now carried either a two-barrel 350 or an optional 400 4-barrel developing 180 hp. The 454 was still on the docket, too – though downrated slightly to 230 hp net.

Catastrophic converters – which became standard equipment across the GM lineup for the 1975 model year – meant the end for the 454 and even the 350 got pushed aside in favor of a new 305 small block that shared the 350’s stroke but had a smaller bore. It still managed 140 hp, even so – which was respectable in view of the fact that it had 45 fewer cubic inches than the ’74 model’s 350 two-barrel and also had to exhale through far more restrictive exhaust plumbing. The 400 four-barrel was the range-topper for ’76, managing 180 hp – which was, again, respectable in the context of the times. That year, for example, there was no Z28 Camaro – and the strongest engine you could order in the smaller F-car was a four-barrel 350 making all of 170 hp.

The Laguna was thus an interesting car when it was new and even more so today because you see them so infrequently. The side louvers and shovelnose front end still look custom, not factory – and owners often find themselves giving short history lessons about this unusual car, of which fewer than 20,000 total were ever made.

* Two years after the production Laguna was cancelled by Chevrolet, NASCAR outlawed the use of Laguna-bodied stock cars.

* Even though big-bocks were not available from the factory in ’76, the Laguna’s cavernous engine compartment makes dropping one in a snap.

* The famous quarter-window louvers were optional in ’74 but standard thereafter on coupes. A power-activated Skyroof sunroof and Landau vinyl roof were among the car’s major optional extras. 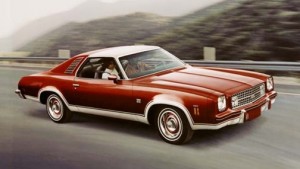 Cars (and concepts) that deserved to be crushed…