In the ’80s, it was tinny electronic recordings advising you that “the door is ajar.”

In the ’90s, it was auto-strangulating seatbelts that assaulted you as soon as you closed the door.

But is anything more cement-headed than the current obsession with overlarge wheels – “rims” (ree-uhms, if pronounced in High Ebonics)?

The sight of something along the lines of a clapped-out ’78 Caprice Classic worth maybe $1,200 sporting $3,000 worth of tackier-than-New-Jersey-Hausefrau Cameltoe is a spectacle unique to our era. Even more startling is that the exact same look is emulated by the designers of $60,000 SUVs, which is the surest evidence there is that the ghetto has moved to the ‘burbs.

Where did it all begin?

Performance cars and (to a lesser extent) off-road trucks used to be the only vehicles that had wheels/tires larger than about 15×7 or so. It made sense, too – because performance cars handle better when the contact patch is bigger (hence, a wider wheel/tire) and there’s less flex in the sidewall – hence taller/larger diameter wheels, with shorter, stiffer sidewall tires.

Trucks and 4WD SUVs usually have M/S-rated tires with big sidewalls for the opposite reason; some flex is good when you want max grip in low-traction situations off-road.

At first, it was mere copycatting. Standard cars were made to appear sportier-lookin by outfitting them with larger/wider/taller wheels. But it soon got completely out of hand – to such an extent that today, almost any minivan or “crossover” wagon can be ordered from the factory with 19, even 20-inch wheels, each of them costing probably $500 per and doing nothing functionally useful while doing a great deal to screw up the ride quality, overwork the brakes, increase rolling resistance, steering effort and make the family truckster much more expensive to buy/operate than it needs to be.

It’s as demented – and pointless – as everyone walking around with ever-larger bulging codpieces. Looks at me! Mine’s bigger! I must bees impo’tant!

It’s like crows fighting over a piece of tinfoil to line their nest with – or a chimp dazzled by a shiny key dangled in front of its eyes.

Every time I see a PT Cruiser (usually also outfitted with fake chrome portholes) or Escalade riding along on its “twennies,” a Vesuvius of bile starts to churn in my guts. It’s like seeing an old lady in a bikini – or a fat girl in hip-huggers. It just doesn’t work – and the whole thing, besides, is about as original as barbed wire arm tattooes.

I keep hoping it all go away – like Disco and bell bottom corduroys.

But rap culcha – which gave us the obsession with ree-uhms – shows no sign of losing steam, even after 20 years of defiling America more thoroughly than a TSA goon fondling your 14-year-old daughter.

Remember how we all thought when the world falls apart, the aftermath will look like “The Road Warrior” – with guys in football pads driving around in V-8 interceptors searching for gazzuline?

Well, it looks like it’ll be a pimped-out Caddy with a gold-toofed thug sporting his ree-uhms looking for a blunt instead.

Twenty-something years ago, who’da thunk it?

Not me, for sure. 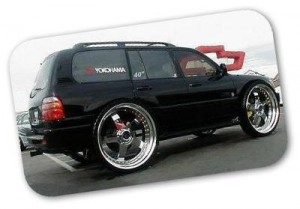