Compact trucks are all but gone – the last of the Mohicans is Ford’s Ranger. Everyone else has upsized to at least nearly mid-sized, including GM. The smallest truck you can get from the general is the GMC Canyon and its lesser-trimmed Chevy cousin, the Colorado.

They’re both bigger than the old S-10 series they replaced  – and bigger than the current Ford Ranger, the only true “compact” truck left on the market – but they’re still not quite as big as the Dodge Dakota or even the also-upsized Nissan Frontier.

So if you’re in the market for something that’s still manageable, size-wise, but which also offers the option of V-8 power and some real-deal capability – the Canyon/Colorado could be just the ticket.

The Canyon is GMC’s medium-small pick-up, about the same size as a Toyota Tacoma but about foot shorter overall than a Nissan Frontier or Dodge Dakota. It’s a higher-trimmed cousin of the Chevy Colorado and comes in regular cab, extended cab and crew cab configurations with five and six-foot-long beds. You can get an economical four-cylinder engine, a more powerful in-line five or a really powerful V-8 engine.

Bluetooth wireless is now standard equipment on all trims, along with a six month free trial subscription to GM’s OnStar Directions and Connections live operator assistance.

Otherwise, the Canyon is a carryover.

Still not too big for those who don’t need a Mondo Truck.

Mondo V-8 power can be had.

4WD available with four-cylinder engine (competitors like the Frontier require the optional V-6 to buy 4WD).

Getting a bit long-in-the-tooth (current model mostly the same as the 2004 model).

Not as manly as larger/stronger Dakota.

Not quite as nice inside as Nissan Frontier and Toyota Tacoma.

The Canyon can be equipped with either a (fairly large) 2.9 liter four-cylinder producing 185 hp, a 3.7 liter in-line five (the only such engine on the market) producing 242 hp or a 5.3 liter V-8, producing 300 hp – in extended and crew cab versions only.

You can get a five-speed manual with the 2.9 liter engine, but both the in-line five an the V-8 come with a standard four-speed automatic.

The standard four in the Canyon is larger and more powerful than the Nissan Frontier’s standard 2.5 liter, 152 hp engine and also the Toyota Tacoma’s 2.7 liter, 159 hp engine. The Dodge Dakota – which is bigger and some 800 pounds heavier – comes standard with a 210 hp 3.7 liter V-6.

If you step up to the in-line five, you get slightly more hp than the Tacoma’s optional 4.0 liter V-6 (236 hp) though not as much as the Frontier’s optional 261 hp 4.0 liter V-6. Neither of these (roughly) size-equivalent pick-ups offers a V-8, either. The Dakota does – but again, it’s a significantly larger (and much heavier) truck.

Another nice thing about the Canyon’s powerteam roster is that you can order 4WD with the four-cylinder engine, which gives you winter-weather grip and off-road capability without killing you on gas mileage: 18 city, 24 highway is not half bad for a real-deal 4WD pick-up. (The five-cylinder comes in at 16 city, 21 highway; the V-8’s a chugger at 14 city, 19 highway.)

All four-cylinder Frontiers, meanwhile, are 2WD-only.

You can get 4WD with the four-cylinder engine in the Toyota Tacoma – but its EPA rating of 18 city, 20 highway is not much better than the V-6 4WD Frontier’s. On the upside (for Toyota buyers) the optional V-6 is available with a six-speed manual transmission.

All Dodge Dakotas are automatic-only; 4WD is available with either the base V-6 or the optional V-8.

Properly equipped, a Canyon can tow 6,000 pounds – slightly less than the Tacoma (6,300 lbs.) and Frontier (6,100 lbs.) and a bit surprising given its V-8 advantage over its (roughly) same-size competition.

The Canyon can be equipped with a Z71 off-road suspension package or on-road ZQ8 sport-oriented package – giving buyers the option to custom-tailor ride quality and handling to their preferences. The Z71 rides stiffer on road and feels bouncier in dips due to its greater ground clearance, off-road shocks and M/S-rated tires – but it’s extremely capable dealing with muddy fields and rocky trails. Conversely, the ZQ8-equipped Canyon sits closer to the ground and has shocks/suspension calibrations and faster-ratio steering (as well as 18-inch performance tires) designed for optimum cornering – which it will do surprisingly well.

The four-speed automatic (standard with the five-cylinder and V-8) doesn’t have the tighter gear spacing of competitor’s more technologically up-to-date  five (and six) speed transmissions, but the high torque numbers of the Canyon’s engines (242 lbs.-ft with the 3.7 liter engine 320 lbs.-ft. with the V-8) make this almost irrelevant because there’s plenty of grunt at nearly any engine speed – so the transmission doesn’t need to shift from gear to gear as often to deliver smooth acceleration.

I personally like the four-cylinder/2WD/manual transmission combo the best because it’s fun to drive, respectably efficient – and still work-truck capable. I used to believe 4WD was essential in a truck – but after living in the country (rural SW Virginia) for seven years now, I realize it’s really not. For me, at least. You may live in an area where it snows for weeks/months during the winter – or you need a truck that can claw its way down a backwoods fire road. In which case, fine. But for many of us, 4WD is like having an AK-47 in the closet. It’s nice to think about it, to know it’s there – but the truth is, we really don’t need and only use it every once in awhile.

Just in the way of food for thought.

If you mostly need a truck to get stuff home from Lowes or cart the dog around, 2WD may be enough – and a 2WD Canyon with its almost-economical four-cylinder engine could be just the thing.

The outside of the Canyon is rugged-looking, blocky and even a little angry. It’s tougher-looking than the Tacoma – even if it can’t pull quite as much. But it’s not as confident-looking as the Frontier or Dakota. It reminds me a bit of the little guy in the bar who has to puff himself up around the bigger dudes, so they won’t think about messing with him.

The inside is a weak point in terms of materials and refinement.

The current Canyon (and Colorado) haven’t been updated significantly since their introduction back in 2004 – seven years ago – so even though you’re looking at a 2011 model, it looks a lot like 2004 in there.

Except for a few minor changes (such as newer stereo systems) the basic layout is exactly the same. It’s not that it’s terrible or anything; it’s just that back in 2004 trucks were a lot truckier than they are now – and newer/more recently updated models are fitted-out with nicer materials and look and feel more like luxury sedans than sheetrock haulers. That said, the Canyon’s cabin is coherently laid out and (important for a truck) supremely functional – right down the to the column-shifted automatic, which is more ergonomic than a floor-mounted shifter and also frees up space on the console and makes three-across passenger-carrying  (with bench seating) feasible.

Straightforward rotary knobs control fan speed and heater/AC settings; these are large knobs, too – so they’re easy to operate even if you’re wearing thick gloves.

Even though the Canyon is a bigger truck than the S-10 it replaced, it’s still more compact than the Nissan Frontier – which isn’t available in regular cab form (base model is extended cab). At 192.4 inches long, the regular cab Canyon is more than a foot shorter than the extended cab Frontier (205.5 inches). If you don’t need the extended cab layout, but do need more space in the garage, the Canyon’s more manageable dimensions can be a definite plus.

The Toyota Tacoma does come in regular cab form – and at 190.4 inches bumper to bumper it’s shorter than the Canyon regular cab. But its standard four-cylinder engine gives up almost 30 hp to the Canyon’s base four.

A weak point is price: GM could have done itself a real favor by pricing the aging-design Canyon lower than others in its segment. But at $17,045 to start, the Canyon regular cab is several hundred bucks more expensive than the regular cab Tacoma ($16,635) and only a few hundred bucks less than the extended cab Frontier ($17,750).

It’s not the newest, nicest – or even the most capable – truck in the segment. But the Canyon does offer some attributes (almost-compact size, 4WD with the four – and available V-8 power) that its newer-design rivals don’t.

If you can wrangle a good deal on one, it could be worth overlooking its dated design and rougher-around-the-edges feel. 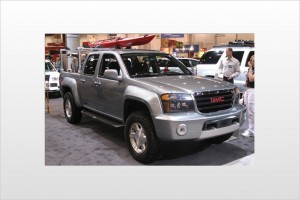