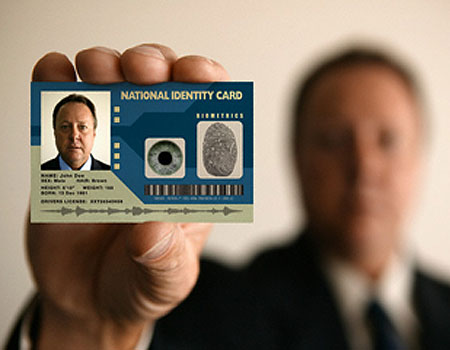 That little plastic laminated card you’ve got in your wallet or purse – you know, the state’s permission slip for operating a motor vehicle? Ever stop to reflect how peripheral the driving part of a driver’s license is?

Because, of course, a driver’s license is in fact our national ID card.

It’s impossible to function in modern society without this national ID card – even if you never get behind the wheel of an automobile. You can’t open a bank account, cash a check, visit the doctor, vote, board an airplane or even get a job without one.

Or at least, it is very difficult to do these things without one.

And none of these things, as such, have anything to do with the operation of a motor vehicle.

If it were merely a driver’s license, the main issue would be whether we’re sufficiently competent to get behind the wheel. There would be a meaningful test of one’s ability to handle a car. An actual road test on an actual road, in traffic – not the perfunctory drive around the cones in the DMV parking lot (and even that is only required of new/first-time applicants in most states) preceded by a sixth-grade-level written (well, touch-screen video) test of one’s knowledge of  The Law.

A medium-smart baboon could pass this test with a little coaching. Few ever fail it – baboons or otherwise. Most of us snicker at the absurdity of it. But it is only absurd from the perspective that assumes they are testing our ability to drive.

Rather, the object of the exercise is ascertaining our identity – in order that we may be kept track of via the interlocking system of data acquisition, indexing, recording and cross-referencing that is the Matrix of modern society.

It is about information – and control.

If it were not, “driver’s licenses” would not be linked to one’s Social Security number – the government-issued ear tag every calf  (oops, citizen) is issued at birth. The SS number, in turn, is the number the government uses to make sure you pay your taxes, to keep track of where you work (and how much you earn), where you bank (and how much you have in the bank), where you live, whom you marry, whether you have children (each of them to be issued their own ear tag in turn) and so on – all of which, again, have nothing to do with your competence as a driver.

But just try to get a “driver’s license” without presenting your Social Security card. There will be much wailing and gnashing of teeth. Red Flags will be raised.

Even if you have an SS number, they will also likely want your birth certificate, a document (also with your SS number) from your bank, or your mortgage holder, or something along those lines. Then, having presented these documents, they will obtain “biometric” information from you – a fingerprint in some cases or merely a special photo that maps your face so that the Panopticon (those cameras that are increasingly everywhere) can register your presence and record your presence wherever you happen to be – which most of the time, of course, will be somewhere that’s not in your car.

Then consider the fact that even non-drivers must obtain what amounts to the same national ID card in order to be able to do the things mentioned up above. They must show up at the Department of Motor Vehicles and provide the same items – SS number and other documents confirming that number. They will then be biometrically cataloged, just like the other cows (er, “drivers”).

No one escapes the national ID card unless they are “off the grid” – a person who exists outside the system, as a de facto (if not de jure) outlaw.

Too far again, you say?

Then try to cross the border, or board an airplane without your national ID card – or (lately) even attend a professional football game.

Your ID will be demanded.

Even a person merely walking down the street, having committed no crime, can be compelled to produce his ID upon demand. And if that person lacks an ID, that person will very likely be arrested on the spot and held until his identity is ascertained.

Remember the opening scene in the original Rambo?  It all begins when Stallone’s character is accosted by a bully cop who demands to see his ID. That was 1982 – when for the most part only “drifters” such as Rambo got racked up for not having ID. Today, we must all have our IDs. Or else.

This is the reality of 2012 Homeland America.

You must have permission to move. You certainly do not move freely.

Even if you are walking.