The circle is now complete. The very first “SUV” – the vehicle that almost singlehandedly turned the market for passenger cars into a market for trucks  – and truck-based vehicles called SUVs – is now a car.

Or at least it’s built on a car’s underthings. The previous Explorer’s truck-based frame – and truck-based 4WD system – are gone. So is V-8 power. For the first time ever, the standard engine is a four-cylinder. And it drives the front wheels.

They still call it an Explorer.

The 2011 Explorer is a medium-sized, car-based crossover wagon – even if Ford still insist on calling it an SUV. It has three rows and room for 5-7 people.

Unlike all previous Explorers, the 2011 model isn’t based on a rear-wheel-drive truck chassis – and no longer even offers a V-8 engine. It has been redesigned in line with the New Realities – higher fuel costs and government requirements that all vehicles achieve an average of 35 MPGs by 2016. A truck-based SUV with a V-8 would have trouble making that cut. A car-based wagon with four and six-cylinder engines might get there.

Or at least get close.

There are other advantages, too – such as more useful room inside as well as better handling on-road. More on this below.

The new Explorer now competes less with “real” SUVs (based on trucks, with truck-type 4WD systems) like the Nissan Xterra, Jeep Grand Cherokee and Dodge Durango; the new targets are car-based crossover wagons like the Chevy Traverse and Toyota Highlander, among others.

Everything. The Explorer is 100 percent all-new for 2011 and other than the name on the fender, shares nothing with previous models that bore the name.

New high-efficiency engines deliver the same or better horsepower numbers as the previous Explorer’s V-6 and V-8 engines – with much improved fuel economy (the four should be good for 30-plus on the highway).

Does the world really need another crossover wagon?

The new Explorer comes standard with a four-cylinder engine – the first time an Explorer has ever been powered by less than a V-6.

The good news is the new 2.0 liter four-cyinder engine is turbocharged and produce 237 hp, much more than the previously standard 4.0 liter V-6 (210 hp). It is also capable of much higher fuel economy – with an expected highway figure around 30 MPGs vs. 19 highway (and 13 city) for the old 4.0 liter V-6.

The bad news – if you’re a fan of the old Explorer’s rear-whee-drive layout and available truck-based 4WD system – is that the four-cylinder engine drives the front wheels and the truck-based 4WD system and low-range gearing are history. You can get a car-type all-wheel-drive system with an electronic “Terrain Management System” that adjust itself according to road conditions. But it is not equipped with a two-speed transfer case, so there’s no Low range, and thus, this Explorer is not equipped for more than light-duty off-roading.

The new Explorer’s optional engine is a 3.5 liter V-6 rated at 290 hp, which is about the same hp as the old 4.6 liter V-8. However, torque output is much lower and comes in at higher RPM which, along with the lighter-duty suspension and chassis, cuts down the Explorer’s maximum tow rating by about 2,000 lbs. The old model could pull 7,025 lbs. vs. 5,000 max (with the V-6) for the new model.

This is in line with other car-based medium-sized crossover wagons, but much less than truck-based traditional SUVs like the Jeep Grand Cherokee (7,400 lbs.) can deal with.

It is a huge shift in priorities – and a big gamble – for Ford.

The V-6 can be ordered with FWD or AWD. Both engines come only with six-speed automatic transmissions.

Over the years, Ford made almost miraculous progress fine-tuning the truck-sourced chassis/suspension of the old Explorer. By the end (2010) it rode beautifully and handled – well, if not athletically, certainly predictably enough for anything short of deliberately reckless driving. Ford took a lot of abuse – and lost a lot of money – because of the ’90s-era debacle with tire blowouts that triggered rollovers. But it wasn’t that the Explorer was unsafe. The problem was negligent owners and iffy tires – tires not made by Ford. Some Explorer owners didn’t watch their tire pressure and drove these failure-prone under-inflated tires at high speeds (80-plus). A tires would blow. Since the Explorer (like all SUVs) sat fairly high off the ground, when a tire blew, the vehicle would suddenly dip at that corner, which unsettled the thing. Toss in the typical not-so-great driver’s instinctive hard jerk of the wheel in response – and, viola – instant loss of control and often, barrel-roll into the ditch.

But it wasn’t the Explorer’s fault anymore than you’d blame a low-slung sports car for getting stuck in the mud up to its door handles if its idiot owner took it off-roading.
Ford’s fault, if any, was marketing its SUV – a purpose-built specialty vehicle designed mainly for its truck-type capabilities – as a general purpose family-mobile. As being “sporty.”

Everyone else did that, too – but Ford got crucified because it had the bad luck to buy a batch of defective tires from Firestone and install them on its vehicles.

The new model, which has a chassis and suspension (fully independent at all four corners) similar to – and derived from – the current Flex, rides and handles like the big car-based wagon it now is. You’ll note right away it sits about an inch lower to the ground (7.6 inches of clearance vs. 8.3 before) which keeps that all-importnt center of gravity as near to the pavement as possible without tossing even the pretense of more-than-car-capability out the window. It is also about four inches longer overall (197.1 inches vs. 193.4) which further spreads out the load. Which, by the way, is about the same. The 2010 Explorer had a curb weight of 4,716 lbs. and the new one’s within 100 pounds or so – despite the smaller/lighter engines and lighter-duty chassis.

Drive the Flex and you’ll have a very good feel for the feel of the new Explorer. It’s good in the sense that it behaves ore in line with what the average driver expects and wants – meaning, like a car. A family car. The electric-assist steering is easy, the thing hums along quietly and doesn’t start to feel nautical in the curves unless you are really pushing it.

It’s bad if you wanted something that still has a manlier vibe to it – even if it does “corner” about as adroitly as a John Deere tractor.

Predictably, wheels as large as 20 inches are available and even the base model comes with 17 inch “rims.”

All these changes have certainly made the new Explorer more on-roadworthy. But at the price of losing virtually all the old model’s off-road (and heavy duty) capabilities.

The new Explorer is lower, wider and longer than the old one – though the exterior shape is still very similar to the old one, with the major exception of the clamshell-looking front end treatment. Continuity is expressed in design cues such as the rearward slanted C pillar while the “SUV” charade is expressed by the twin roof racks and rubberized lower rocker panels.

The big draw relative to the outgoing model is more interior room- made possible by the FWD-based layout’s flatter floor, as well as the pushed-out wheelbase and width. Front seat occupants, for example, get about an inch and half more headroom (41.4 inches vs. 39.8 previously) and a similar uptick in legroom (now 43.9 inches vs. 42.4 in the old model). Second row occupants are similarly upgraded; there’s now 40.5 inches of headroom (vs. 38.7 previously) and a massive 39.8 inches of legroom (vs. 36.9 previously).

The third row (and the cargo space behind it) is also much more generous in the 2011 Explorer. With the third row up, there’s still 21 cubic feet of cargo space available behind them – vs. 13.6 in the old Explorer. Total capacity (seats folded) is about the same at 81 cubes for the new Explorer vs. 84 for the outgoing model – but don’t be deceived by this apparent parity. The new Explorer is much more passenger-friendly than the old model – whose third row was at best For Kids Only. In the 2011, adults can use the third row (and get to them, too). It’s not First Class, but it’s not steerage, either.

Losing the drivetrain hump in the middle of the floor – along with at least an inch more headroom and the vehicle itself sitting more than an inch closer to the pavement 0 makes getting in and out a lot easier – and being inside much more comfortable.

In addition to the stylistic update of the exterior and interior, the new Explorer gets a technological makeover as well. It comes with Ford’s MyKey (teenager thwarting) system, which lets the owner program in a lower top speed, among other things – plus Ford’s Sync integrated voice-command media/information/entertainment system and a new type of stability control called Curve Control specifically set up to course-correct (by automatically applying braking force) if the vehicle enters a corner carrying excessive speed.

The new Explorer is also the first vehicle in this class to come standard with second row seat-belt airbags (these are designed to cushion against torso injury during a frontal impact).

I like the new (and very tactile) layout of the major controls (AC and audio) on the center stack. Large, paddle-type “up” and “down” buttons flank a pair of rotary knobs; it’s the kind of set-up you don’t have to look at while you use. Everything is blue-backlit, including the main gauge cluster. The console-mounted gear selector is also mounted to the left, toward the driver – which is more ergonomic and also makes room for a pair of large cupholders off to the right.

The new Explorer is a very nice vehicle but it’s also a less capable vehicle. This was done to satisfy the government as much as consumers, sot it’s going to be interesting to see whether this major makeover pays off – or kills off what had been one of Ford’s most successful franchises, ever. 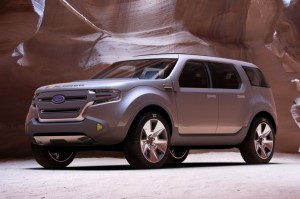 Find a deal on a Ford Explorer