A few years ago I decided to get a concealed-carry permit so that (among other things) I can keep a loaded handgun with me in my car.

Part of the application process included a state-mandated gun safety course – and a talk by a Va. state trooper about legal and other issues related to firearms and motor vehicles. Some of it may interest you – whether you “carry” or not.

In Virginia (my state) and most others that allow concealed carry, if you have a permit, the permit is tied to your driver’s license and vehicle registration. So, if you get pulled for a traffic stop, the cop will probably know you’re carrying (or might be) before he even approaches your vehicle to ask for your license and registration.

The first thing you should do when the cop approaches your vehicle is hand him your license and CHP. Keeping both together in an ID folder (the NRA and other outfits sells them) that you can easily remove from your wallet is idea. This lets the cop know you have a permit. If you are in fact armed, or carrying a weapon in the car, you may wish to inform the officer. You don’t have to (unless he asks) But it’s sometimes worth doing as a courtesy. If you do, be sure you keep both hands on the top of the steering wheel – and ask him how he’d like to proceed. If the gun is on your person and the cop asks to see it, ask him to take it off you. If it is in the glovebox, or other area, tell the cop tell him he’s free to recover it.

The trooper who spoke to my class told us that most cops are not worried about citizens with concealed carry permits – even though they may have a loaded pistol on their hip because people who go through gun safety/proficiency courses and who have been vetted by state and federal criminal background checks are by definition non-criminals. At minimum, they’ve never been convicted of a serious crime. They’re the least likely category of people to point a gun at a cop. The cops are much more worried about people who do have criminal backgrounds – and who don’t sweat laws denying criminals  the right to legally carry a firearm (concealed or not).

Many states that allow concealed carry permits also honor permits issued by other states to non-residents who may be traveling in or visiting their states. Here is a link to the Virginia Citizens Defense League (VCDL) which maintains a current list of states that have concealed carry laws and reciprocity agreements with other states: http://www.vcdl.org/static/ccw.html Be certain you know the law when traveling in other jurisdictions.

If you have a concealed carry permit, it is legal for you to drive from your state through a state that does not allow concealed carry provided your destination is another state that does allow concealed carry. However, you should always put the unloaded gun in the trunk (or as far away from you as physically possible) with any ammunition you may be carrying in a separate part of the car. The safest thing of all – to avoid any possible hassle with gun-unfriendly states/authorities (as in Maryland, Massachussettes and DC, for instance) is to at least partially disassembly your gun and store it in a locked container in the trunk. Carry no ammo. This should make you “bulletproof” in the event you happen to get pulled over in a place like Washington, DC – and they want to try to hassle you about your possession of a firearm.

At least, in Virginia. It may not be smart, but it’s not against the law.

* You can carry without a permit, sort of –

So long as the gun isn’t concealed (meaning, it is openly visible) you may still legally carry – including in your vehicle – provided you live in what’s known as an “open carry” state (like Virginia). However, legal and prudent are two very different things. If you don’t have a concealed carry permit, carrying a gun with you in your vehicle – “openly” or not – is a great way to get arrested and thrown in jail. Maybe worse. Sure, it will probably get sorted out – later, after you’ve spent time in the clink and had to spend who knows how much on expensive legal help. Not worth it. If you want to carry a firearm with you in your vehicle, get a permit.

Even if you do have a concealed carry permit, there are still many areas where you can end up in a boatload of trouble if you are found to have a weapon on you – even just ammunition and no gun to go with it. Because of  Homeland Security rules, for instance, even those with permits may not carry weapons onto airport property – even if all you’re doing is dropping someone off at the curb and you never step out of your own vehicle. The presence of a single live round of ammo in your car that rolled under the seat and which you forgot all about could result in a felony conviction if your car gets searched while on airport property.  Seriously.

Aside from the fact that we live in weird times and you never know when having a gun could be the difference between life and death, I also liked the idea that having a permit might help me get out of a ticket someday. First, many cops are “gun people” – and can connect on a human level with other gun enthusiasts. If you can talk guns with the cop who pulled you over for speeding, he may end up cutting you loose, or at least cutting you some slack. Also, the permit tells the cop you’re a Solid – someone with no criminal record, who went to the trouble to go through the permit process. That also usually weighs in your favor during a traffic stop. It’s not a guarantee, let alone a get out of jail free card – but it is something.

And that’s always better than nothing. 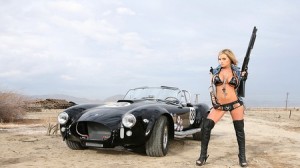