There is a species of American land shark that once prowled the highways and byways of the United States in great fleets, but which have become as extinct as Megaladon – the 60 foot ancestor of today’s Great Whites.

Rusting hulks in weedy fields are the silent monuments of their passing.

One of these masters of metal was Chevy’s Monte Carlo – named after the country, the race or the literary character – as you prefer.

Like its sister cars, the Pontiac Grand Prix and Oldsmobile Cutlass, the Monte Carlo was based on GM’s G-body full-size coupe platform. Unlike its sisters, the Monte was not a child of the ’60s (first year was 1970) and would never be built as anything but a hardtop coupe.

Chevy General Manager Pete Estes is credited with conceiving the Monte; Dave Holls for sculpting the look – which was defined by a massive prow (the result of extending the frame by some two inches from the cowl forward) flanked by broad, semi-pontooned fenders. Formal rear quarter windows and a pompadour semi-fastback roofline completed the shell. Each end was punctuated by chromed steel slabs hung low and wide. A set of single headlights gave the ’70 an alert and hungry look – and clearly differentiated it from the quad-headlighted Chevelle and Caprice coupes.

Pontiac’s John DeLorean, who was actively involved in the development of the Grand Prix when he headed that division, invested similar effort in the Monte Carlo when he was promoted to general manager of Chevrolet. His influence can be seen in the personalized and well-appointed interior – pillowy bucket seats with available center console divider, wood-grained trim for the dash and a plethora of comfort and convenience options ranging from full instrumentation to power windows, door locks and electric rear defroster grid. The knightly crest of Monte Carlo rode proudly in the center of the egg-crate grille.

It was a more elegant car than the smaller, shorter and rougher-looking Chevelle – but no less mean. Which is just the effect Chevy was after. Its menace burbled under the surface instead of splashing about noisily and obviously, like the Chevelle.

The Monte was a car for men – not hooligan 20-somethings.

Standard under the hood that first year was a two-barrel, 250 hp (SAE gross) version of Chevy’s small-block V-8 with the buyer’s choice of Powerglide two-speed or Turbo-hydramatic 350 three-speed automatic.

To beat up on teenagers in Chevelles and GTOs, one could always select the big block 396 (which was now technically a “402”). It bellowed out 330 hp and was ideally suited for the heavy-set Monte Carlo.

But when even that was insufficient, Chevy had more to offer. A Super Sport Package could be ordered for ’70 and ’71. It centered on the stupendous 454 V-8 tuned to 360 hp (365 in ’71) and a tire-annhiliating 500 lbs.-ft. of torque brutalizing the pavement through a THM400 three-speed automatic. In keeping with its more genteel image, manual transmissions were not teamed up with the 454 in the Monte Carlo SS. (Although there is an ongoing debate about the possibility of the four-speed having been available as an obscure Central Office Production Order or COPO special order. )

Also included as part of the SS package were a HD suspension with load-leveling feature, rear anti-sway bar and performance 3.31 rear axle ratio.

The SS Monte was only an intermittent offering, however. As the ’70s rolled on, the Monte Carlo leaned ever more to the luxurious – and the large.

A redesign for ’73 accentuated the pontoon look, along with more “roll” to the overall shape, which seemed to be lunging forward, especially when viewed from the side. Fixed opera windows replaced the first generation’s rear quarter glass – and GM’s new pull-up door handles had become standard equipment. The all-coil suspension was tuned for a soft, nautical ride; the cabin isolated from the road via six gel-soft rubber biscuits sandwiched between the frame and body. Radial tires were now standard, too.

Taking the same road pioneered by the “personal” Pontiac Grand Prix, the new Monte now featured a wraparound dash finished in burl walnut trim. The optional bucket seats swiveled to ease entry and exit. A sporty center console and floor shifter completed the ensemble. Chevy sold a cool quarter-million of them – and the ’73 Monte was named “Car of the Year” by Motor Trend magazine.

Big block power – in the form of a 235 hp 454 – remained available, in addition to both two and four-barrel versions of the 350 and 400 CID small block V-8s. The 454 lasted through ’75 before being discontinued for the ’76 models – which also got a revised front end treatment with stacked square headlights and new tail-lights. Though the ’76 model was a bit awkward-looking and had far less power than the previous year, it turned out to be a monster hit for Chevrolet, with more than 400,000 sold. Many believe it was due to the fact that by this time, people were figuring out that big cars were on the endangered species list and that the Monte might not be around much longer.

I turned out they were correct.

A two-thirds scale third generation Monte Carlo bowed for 1978. It had an exaggerated, forward canted front clip up front and an abbreviated bustle-back rear treatment that lacked the proportion and curb appeal of the earlier models. This was also the first year for V-6 power. Big blocks were long gone and so was big horsepower. The largest V-8 available was the new 5.0 liter 305, ginning up a sad-sack 140 hp.

But all was not lost – yet, anyhow. In 1981, the Monte made a comeback with a new, NASCAR-inspired shape that resurrected the dignity of the earlier cars. It had the familiar long hood and handsome fixed rear quarter glass, but the overall proportions were vastly improved over the truncated ’78-’80 version. In ’83, the SS package returned, featuring monochromatic (all one color) paint, aero nose clip and – under the hood – the same L69 5.0 liter High Output V-8 that was offered in the Camaro Z28. It featured a Corvette camshaft, performance-calibrated carburetor and low-backpressure exhaust. Tire-chirping 1-2 upshifts were back!

The SS – and he regular Monte Carlo sport coupe – was a big hit and by 1984, close to 150,000 had been sold. The SS monte Carlo offered performance comparable to the smaller Camaro, with usable back seats, a generous trunk and far more comfortable seating up front.

In ’87, an Aerocoupe sub-model appeared that was basically an SS with a convex rear glass and abbreviated decklid. These were very low production compared with the standard SS and today are considered very collectible.

1988 would be the last year for a rear-drive Monte Carlo – though the name continued through 2007. While V-8 powered would make another comeback in 2006, the modern Monte just wasn’t the same. Connoisseurs regard front-drive, downsized Monte Carlos as distaff cousins of the Great Knight, at best.

* The ’77 Monte Carlo, though technically listed as an “intermediate” sized car, was actually larger than the full-size Caprice that year.

* Fourth generation (1981-’88) Monte Carlos are the only Monte Carlos that were available with factory-installed glass T-tops.

* A version of the ’83-’88 SS Monte Carlo was sold in Mexico with a less powerful, 165 hp of the 5.0 liter V-8 and other differences, including the regular sport coupe’s wheels. 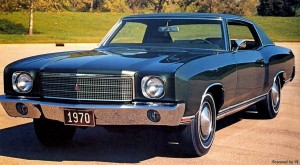 15 Percent Ethanol “Gas” May be Here by Fall…