This iconic muscle car has roots that go back more than 40 years, to 1967, when the first one appeared as GM’s answer to the Ford Mustang. Like Mustang, it survived the early ’70s die-off, when almost every other muscle car went extinct, prospered through the Disco Days of the mid-late 1970s and became one of the most commonly slighted cars on the roads in the ’80s – only to slip on a banana peel in the late ’90s, after a not-so-great “Batmobile” restyle that led to plummeting sales and eventual cancellation in 2002.

Eight years later, in 2010, GM revived the franchise with a new Camaro that was true to the basic template of the original 1967 model.

And once again, Camaro’s a big hit.

The already-strong standard V-6 gets a bump in output from 304 to 312 hp and all trims come equipped with GM’s OnStar emergency/get directions assistance system.

The much-anticipated convertible Camaro looks like it’ll be a 2012 release.

As faithful to the muscle car concept as a modern computer-controlled, air bag and ABS-equipped car can be. 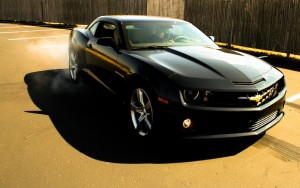 U boat-like outward visibility; doors are high – roofline is low.

Harder to get into and out of than Mustang; not nearly as roomy inside as Challenger.

Like all these latter-day muscle cars, the cost of  insurance will probably keep Camaro out of the hands of most people under 35.

Chevy began the trend of offering V-8 horsepower levels in even the standard-issue version of Camaro – and ups the ante again for 2011. The Camaro’s standard 3.6 liter V-6 now rates 312 hp – eight more than last year and 7 more than the 2011 Mustang and Challenger’s standard V-6 engines.

The base V-6 Camaro’s output is also superior to most of the V-8 powered Z28s of the first 30 years of the Camaro’s history. In 1984, for example, a Z28 equipped with the “High Output” 5 liter V-8 offered up 190 horsepower – which seemed like a big deal back then. But it looks seriously soggy by the new Camaro’s benchmark numbers.

As before, the Camaro’s V-6 can be paired with ether a six-speed manual or six-speed automatic ; either way, it is capable of  delivering almost 30 MPG on the highway.

Zero to 60 runs with the V-6/manual combo are around 6 seconds flat – which is also quicker than a ’67 Z28 and very competitive with a 1970 LT-1 Z28. And that beast was  equipped with a solid lifter-cammed, Holley-carbed, high-compression 350 cubic inch V-8.

Or, for the true Afterburner Experience, strap on the SS. Its 6.2 liter V-8 delivers 426 net horsepower (400 with the optional automatic). By the standards of measurement of the ’60s, this would probably ave been advertised as being in the neighborhood of 500 “gross” hp – just for some perspective.

No matter the measure, though, it is tremendous power – enough to launch the 2010 SS with six-speed to 60 in under 5 seconds.

To make sure Camaro’s Numero Uno, Chevy will apparently be returning the Z-28 to the lineup sometime next year – with power expected to be in the 500-plus range, which should be enough to stomp the 2012 Challenger SRT-8s’ 475 hp Hemi.

Gas mileage with the 6.2 liter V-8 (which features cylinder deactivation technology) is actually not too bad: 16 city, 24 highway. Again, for some perspective, that is significantly better than what a mid-late ’70s Z28 with less than half the power could manage. My ’81 Z28, for example, was a 12 MPG hawg – and the 350 V-8 under the hood ginned up all of 190 hp.

The base V-6 Camaro is such a potent performer it almost makes the V-8 SS seem unnecessary. And, given the government’s recently passed fuel-efficiency diktats – which mandate that each automaker’s “fleet” average 35 MPGs or face gas guzzler sanctions that will be passed on to consumers in the form of jacked-up sticker prices – it may end up being the Camaro’s salvation. With a little tweaking, the 3.6 liter engine could probably make the 35 MPG cut while still having guts enough to make it as a performance engine – which is essential to Camaro’s credibility and thus, its survival.

Driving the V-6 is great fun, especially with the six-speed manual transmission. Burnouts and tire-chirping upshifts are simply a matter of turning off the traction control and planting your right foot. The V-6 car’s suspension actually feels better than the suspensions of Z-28s gone-by. (I can vouch for this; I’ve owned five of them.)

It’s very firm, but not rigid – which the old Zs were. Excellent steering response (even the base car is fitted with very large 18-inch rims that are one – and even two – sizes larger than what used to be standard equipment on Z-28s).

Those who have owned/driven Camaros before will feel immediately at home. Those who haven’t – especially younger buyers in their 20s, who grew up with smaller cars – will need a little while to get used to the heavy/big feel of the car. Even the base V-6 car weighs close to 4,000 pounds with driver on board. Camaro’s wheelbase is 112.3 inches and it stretches 190.4 inches from end to end. A Large Marge in every way – but that is part of the experience and one of the essential qualities that defines a proper American muscle car and which distinguishes it from puny import sport compacts.

The SS, meanwhile, is hell on wheels.

To beat it, you’ll need a Corvette – and then you’ll lose two seats as well as around $20k out of pocket. The output of its 6.2 liter V-8 is as brutal as Tony Soprano in a bad mood. An SS can smack around the cool-looking but several hundred pounds heavier and not as powerful Challenger R/T – and though the Mustang GT is about as quick (being lighter) the Camaro’s hit-man muscularity gives it a tougher feel.

It may be too tough for some.

A street car with just a touch less power than a current Nextel Cup stock car can be intimidating. It also requires a strong will to resist seeing what she’ll do – which is plenty – which will put your driving privileges in serious peril in no time at all. Meanwhile, if you don’t use it to its fullest potential, there’s the anguish of denial. Keeping this thing under 80  – and not ripping the tires to shreds at every opportunity – is not unlike trying to stick to your diet while going out with friends to Outback Steakhouse.

If you do buy one of these things, buy a good radar detector on your way home from the dealership.

GM went to great lengths to give the new Camaro the look of a classic first-generation (1967-’69) Camaro and the effort is extremely well-executed, especially on the inside. The shape of the instrument cluster/console, the fonts used for the numerals/lettering – nicely recall the detail touches that made the early Camaros so distinctive and special. Ford’s Mustang has similar themes, but each car is true to its own ancestors and very different from each other. Both Camaro and Mustang are much better on the inside than the Dodge Challenger – another revived muscle car competitor – which has a nothing-special layout that suffers from Chrysler’s catastrophic money problems.

“Utility” and “muscle car” are terms that go together like ice cream and Tabasco. The lack of usable rear seats and limited cargo carrying capacity (11.3 cubic feet for Camaro) puts these kinds of cars at a major disadvantage relative to the many similarly high-performing/handling sport sedans and hatchback wagons (like the Subaru WRX STi and Mitsubishi EVO, to name two) that can match the 0-60 time and skidpad numbers but which can also carry four or even five people and thus are doable as “everyday” cars, or even family cars – work that a Camaro or any car like it is hopelessly ill-suited for .

Back in the Day –  the ’60s and ’70s and even the ’80s – there were  almost no genuinely high-performance sedans and wagons that could compete directly with cars like Camaro on performance. So, people put up with the limited utility in order to get the performance.

But today, buyers can get utility and performance in the same car. This may be one of the toughest obstacles facing latter-day muscle cars like Camaro, Mustang and Challenger.

Camaro’s a first-rate effort with superb fit and finish – and none of the Chock Full O’ Nuts rattles and creaking/groaning of Muscle Cars Past. Virtually no discernible wind noise, even at 80 mph (unless you tromp on the gas pedal – and then it’s sounds you want to hear).

Nothing cheap or cheesy about it, anywhere.

Also unlike Muscle Cars Past, the new Camaro is balanced and safe. It is not all engine and looks – with marginal brakes and the safety envelope of a moth-eaten parachute. All trims, from base V-6 to top-of-the-line SS – have outstanding brakes with ABS, traction and stability control, front seat side-impact air bags and curtain air bags for front and rear seat occupants.

It may not be safe for your DMV record, but otherwise it’s as responsible as a car of this type can be.

The base model is very well-equipped, too. It includes AC, an MP3-playing stereo, tilt and telescoping wheel, cruise control, those meaty 18-inch rims and the 312 hp V-6/six-speed manual transmission – all for $22,680.

You can heads-up display in the higher-trim LT SS, as well as a very high-end Boston Acoustics stereo with nine speakers, MP3 player and satellite radio.

This Camaro, despite its ergonomic flaws, is the best Camaro since the popular ’80s-era Camaros. It’s got the attitude – and it most definitely has the power. Now all it needs is enough buyers to help keep the franchise alive… .

Why Casey Anthony Got Away With it…