Non-Buick people may not know it, but the Riviera nameplate goes back many years before the introduction of the now-famous ’63 coupe. Buick used it to designate the pillarless hardtop coupes and sedans that appeared in the late 1940s and continued through the early-mid ’50s.

The ’63 coupe, however, was something entirely new.

It made its production debut in late 1962 and was intended to do two things: First, help Buick rebuild after the recessionary slump of the late ’50s, during which overall sales had declined significantly. Second, to give Buick something to lure potential buyers away from Ford and its successful Thunderbird franchise.

It was an absolutely striking car – and also a very different car. Where the Thunderbird was classicly styled and almost baroque, the Riviera was daringly modern, with a “knife-edge” styling defined by sharp pleats and angles. The entire works was muscular and coiled – a sheetmetal hitman for young executives on their way up.

Standard under the hood was Buick’s “nailhead” V-8, displacing 401 cubic inches, and the two-ton Riv needed every inch of displacement.

It handled and stopped fairly well, too.

The ’63 model featured standard power steering and high-performance (for the day) power-boosted aluminum finned drum brakes all around.

Inside were low-backed bucket seats, which could be upholstered in vinyl, cloth or leather. This was a full-on luxury coupe, so even cruise control was on the options list. Though common in the modern era, back in the early ’60s, cruise control was a feature usually found on higher-end cars only. (Technical aside: The Riv’s system was a vacuum-mechanical system, unlike today’s electronically-controlled systems.)

A significant technological update appeared in time for the ’64 model year, when GM’s new three-speed Turbo-Hydramatic automatic transmission entered production. This was a major improvement over the told two-speed units (High and Low forward gearing) used previously. Buick marketed this transmission as the Super Turbine 400 (GM would later market it across its divisions as the THM400).

Another upgrade came under the hood, with the addition of a bigger stronger 425 V-8. This mega-motor was rated at a very stout 340 hp in single four-barrel form. But buyers could step it up by ordering the optional dual carb Super Wildcat version, which bumped the output to 360 hp.

As the muscle car era entered full flower, Buick decided to bulk up the Riv even further with a Gran Sport package that included the Super Wildcat 425 V-8, dual exhausts and aggressive 3.42 axle ratio.

This was a roller that could definitely roll.

Road testers clocked examples equipped with the optional 425 V-8 as being capable of reaching 60 mph in under 8 seconds through the Twin Turbine automatic transmission – with a top speed close to 130 mph, all out. For comparison, this performance is comparable to an early 1980s Ford Mustang GT 5.0 liter.

Buick introduced the second-gen Riv in 1966. Unlike the original, the ’66-up Riviera shared a platform with another GM car – two of them, actually. The Oldsmobile Toronado and the Cadillac Edlorado. However, it did not share the front-wheel-drive layout of its sister cars. The Riviera also retained its own unique, Buick-specific drivetrain.

The 425 Wildcat remained at the heart of things for ’66, but by ’67 was retired in favor of an updated version of the Buick V-8, punched out to 430 cubes. This would grow to its ultimate expression in 1970, when Buick released the 455 V-8. This engine was one of the most impressive American V-8s ever built, then or since. Its 360 hp wasn’t what made it exceptional, however. At the time, many others were offering about the same. Rather, what made the Buick 455 so tremendously formidable was its 450-plus foot pounds of torque – with the peak twist happening at just off fast idle. This made it the equal of top dog muscle car motors – including the legendary Chrysler 426 Street Hemi – when it came to “street” performance.

In the smaller, lighter GSX (corporate cousin of the Chevy Chevelle and Pontiac GTO), this same basic engine could deliver high 12 second quarter mile time slips through an automatic transmission and with the AC running. The six-passenger Riviera with Strato-bench seats wasn’t quite as quick, perhaps – but you still messed with it at your own risk.

As the calendar rolled over into the ’70s, GM unveiled a completely new, third gen Riv that was every bit as striking as the original ’63 model – and which earn its place in the pantheon of automotive greats.

The “boat-tail” ’71-73 – with its big-hipped, pontoon-style rear fenders, sloping rear canopy glass and seemingly endless flight-deck of a hood up front – looked like absolutely nothing else on the road. Contrast-color vinyl roofs provided the finishing touch.

Buick’s Jerry Hirschberg is given credit for the boat-tail cars and was inspired by an earlier concept penned by GM’s legendary Bill Mitchell.

These third gen cars remain one of GM’s most iconic and instantly recognizable designs. General Manager Lee Mays described it as a “triumph of automotive styling,” though he himself reportedly did not care for the look.

It was also an enormous car – stretching a Lusitania-like 223.4 inches by 1973 and riding on a 122 inch wheelbase and weighing close to 5,000 pounds fully fueled and with driver onboard.

Though it had become a true land yacht in terms of size as well as luxury amenities, Buick still offered performance equipment – including a Stage 1 package that centered on the 455 V-8 (now rated at 330 hp), firm-shift THM400 automatic, positraction rear, chrome engine dress up kit plus a new firm-ride suspension based on the then-new radial tire. In fact, the ’71 Rib got a unique radial tire designed just for it – designed to work with the car’s Accudrive front suspension geometry, which worked to limit body lean under hard cornering.

1974 introduced a new look that was more subdued. Though the Riv was still a king of the road in terms of its bulk, it had lost much of its previously distinctive styling – as well as power.

The boat-tail treatment was replaced with more conventional sheetmetal; quad headlights up front were similar to what you’d see on other GM cars that year – a clear sign of the trend toward “badge-engineered” cars that, in later years, would cause GM to slip from a 50-plus percent of the U.S. car market in 1970 to less than 24 percent by 2009. The 455 was still in the lineup, in name at least – but its sails had been trimmed considerably. The final year (’76) saw it detuned to 230-245 hp. This was still decent for the time, however – and though the ’74-’76 Riv may not have been as visually glorious as its predecessors, it was still a large-living hunka hunka burning love.

Smart shoppers bought them while they still could.

Beginning in ’77, GM steadily downsized (and de-powered) the Riv. The 455 got dropped (replaced by the smaller 350 and the Oldsmobile-sourced 403) and the car’s wheelbase was trimmed to 115.9 inches. These would be the last of the rear-drive Rivs as Buick (and GM) began the shift over to front-drive and (in time) compact-sized versions of what had once been America’s heaviest hitters.

The last physically substantial Rivieras were built between 1979 and 1985. These cars were slightly larger than the Regal coupe of the same era – and still offered a high level of luxury, although not much in the way of gumption to go with it. 350 cubes was as big as it got, with many examples leaving the factory with the smaller, Olds-sourced 307 or Buick’s 231 V-6. This was also the first time a Riviera offered less than a V-8, though in its defense, the little six was available turbocharged. Briefly – and tragically – an Oldsmobile-sourced diesel V-8 was also available.

By ’86, the classic Riviera shell itself was no more – replaced by a downscaled runt of a car that was smaller than a mid-’70s Chevy Nova. It was also crippled by not-ready-for-prime-time technology, such as a digital interface that caused endless problems for owner, dealer – and GM’s warranty department.

A last gasp was attempted in ’95, but the Koi-faced, pinched-butt thing that Buick created never resonated with buyers. In ’99, the final year, fewer than 2,000 were made.

Of all Rivieras, the first generation and early ’70s “boat-tail” models are without question the most interesting and collectible. Prices on the first generation cars are fairly high but the quirky ’71-’73s remain very accessible. They’re also big fun to own, just as they were when new.

* Early “boat-tail” Rivieras had a louvered trunk that was part of the car’s ventilation system. Leakage problems (rain water as well as engine exhaust) forced a redesign, so only the ’71 cars have this feature.

* Buick offered an early form of traction control (Max Trac) on the ’71-’73 boat-tail Riviera that limited wheelspin when the drive wheels encountered a slick surface by cutting back engine power.

* The Riviera, over its lifetime, offered V-8s, V-6s, turbochargers, superchargers and multiple carburetors.

* The Riviera remained in continuous production for 36 years, making it one of GM’s longest-lived and most successful models. 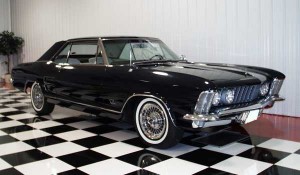