The “deuce and a quarter” was Buick’s ultimate ship of the line—measuring nearly 19 feet long (225 inches) from snout to tail. This road titan’s wheelbase would eventually stretch to a full-figured 127 inches (in 1970), a girth exceeded in the modern era only by six-figure exotic land yachts such as the Rolls Royce Phantom or Daimler Maybach. A 2009 Lincoln Town Car’s wheelbase registers 117.7 inches, or nearly a foot less than the battlewagon Electra’s.

Just for some perspective.

The behemoth was available as a six-window hardtop sedan, lead sled coupe, and convertible coupe. Like the WW II Iowa Class battleships, the 225 outlasted the era it was born in by decades—continuing in production until 1984, until the last of them was finally retired. (The Electra name was continued through 1990, but the models built after 1984 were all downsized, front-drive models that ought to be considered distant kin, at best.)

As Buick’s flagship model, the 225 offered the best of everything (short of a Cadillac), including one of the first production applications of Supplemental Restraint Systems—air bags, in modern lingo. These became available in 1974, along with Buick’s Max Trac traction control system—both of them literally 10–15 years before other cars began to offer such technology.

Of course, a tank as slab-sided as the 225 had little real need for additional safety equipment. Physics is you friend when you’re packing two tons of mass, have a hood made of heavy-gauge stamped steel that weighs more than the entire front end of a Honda Civic CVCC, and a “bumper” that would more accurately be described as a battering ram.

Few ordinary cars stood a chance of surviving an encounter with a 225.

Coupe versions were a real treat—with room for six people and more in the trunk.

The ’65 pillarless hardtop coupe managed to be graceful despite its massive size—in the same way the way Titanic was a thing of awe-inspiring grace. It took time to run your eyes across the acres of metal and seemingly endless details—from the slatted, slim-line horizontal brake/parking light combo out back to the baroque but handsome chrome touches up front. Electras were among the first of GM’s cars to feature hidden wiper blades that tucked under a slightly raised lip at the rear of the hood, a design touch that cleaned up the exterior noticeably even if it did make it a bit harder to clear ice and snow on a cold winter morning.

Though the 225 shared its basic platform with the Oldsmobile 98 (and equivalent Cadillac), the Buick maintained its uniqueness through styling and what was under the hood. Huge V-8s designed and built by Buick—starting with the 401 in ’59 and achieving ultimate expression in 1970, when the 7.4-liter 455-cubic-inch V-8 arrived on the scene—assured the 225 never lacked for thrust.

To Buick’s eternal credit, even the last of the 225s were still impressively large—riding on a still-substantial (for the time) 118.9-inch wheelbase. Somewhat confusingly, by this time, Buick had been using the “Electra” designation as more or less a trim package on other large Buicks, such as the Park Avenue, Limited, and Estate Wagon.

1980 was actually the last year that Electra 225 appears in the literature—a quiet admission by Buick of the car’s downsizing. The process had actually begun three years earlier, when the Electra’s overall length was chopped back by nearly a foot.

Still, like the Pontiac Trans-Am of the same period—which still offered bigger engines and better performance than just about anything else then available—the Electra tried to maintain its dignity. Arguably, it succeeded. The Electra 225 (and the plain old—and slightly smaller—Electra) carried the big car flag during an era of size-attrition, when virtually all formerly full-size American cars got squeezed down to the dimensions of what, in better times, would have been considered medium-sized cars at best—and compacts at worst.

* As Buick’s top-of-the-line model, the Electra 225 boasted four portholes (or Venti-Ports) on its fenders. These, however, were altered during the 1981 model year when pressed-in slats on the side trim were substituted.

* While models built up to the mid ’70s had Buick-built engines, later ’70s models sometimes came equipped with the Oldsmobile-built 403 and 307 V-8s.

* The longest-overall Electras measured 233.3 inches (in 1976), with the added sheetmetal grafted on in order to help the car to comply with the federal government’s new bumper-impact requirements. 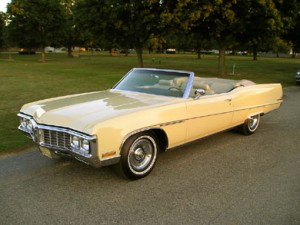 Some Motorcycle Pros… and Cons