Beauty can be more than skin deep – just take a look at the 2011 Jaguar XK.

Heavily updated in all the right places – and left alone were it was already right – it’s now one of the smartest choices in its segment, in addition to being one of the easiest to fall in love with.

The XK is an ultra-luxury GT coupe/convertible. It has four seats but it’s really got room for just two plus some overnight bags in the back.

A 75th Anniversary special edition has been added to the lineup, too – with a starting price of $104,625.

A much more powerful 5.0 liter V-8 (with or without supercharger) replaces the previous 4.2 liter V-8.

The traditional – but quirky – Jaguar dog-leg shift lever has been replaced with a fully electronic rotary knob controller similar to the one used in the XF sedan.

All trims get heated windshields (a feature inspired by Jaguar’s corporate partner, Land Rover) and also a new Adaptive cruise control system that automatically adjusts vehicle speed in relation to the ebb and flow of surrounding traffic.

Performance is now appropriate to price. The previous XF looked like a six-figure supermodel – but its 0-60 time was on par with Mere Ordinaries such as $26k Mustang GTs.

More sporting than overheavy competitors like the Mercedes-Benz SL.

More elegant than a Porsche 911 – and easier to get into, too.

A relative steal compared to both of them.

It’s almost too pretty to take out into the world. You feel nervous leaving it parked unattended.

It’d be nice if you could get a manual transmission – especially in the supercharged XKR.

While the 4.2-powered XK was not a slow car, its 0-60 time of about 6 seconds flat wasn’t quite exotic. For a car pushing six figures, acceleration was something of a letdown.

The 0-60 time with the standard engine drops to just over 5 seconds. With the optional supercharged engine, the XKR can get there in about 4.5 seconds.

That’s supercar quick – and enough to pester 911s with.

The standard transmission with either engine is a six-speed automatic with Sport and Winter modes as well as driver-selectable manual control of gear changes via steering wheel mounted paddle shifters.

All versions of the XK are rear-wheel-drive.

Those figures are actually pretty respectable given the power/perfomance this car offers. For perspective, there isn’t a single ’60s-era big block V-8 muscle car that can touch the Jag’s 0-60 time (let alone its top speed) and those cars were lucky to make 10 MPGs while idling.

The XF’s genius is that it can run with a BMW 6-Series (including the ultra-performance M6) or Porsche 911 yet it’s as comfortable to cruise around in as a Benz SL550. This arguably makes it a superior everyday car – one that will satisfy the enthusiast driver’s need for speed and handling while maintaining a level of comfort  and drawing room elegance that very few similarly powerful cars can match.

The 5 liter V-8 has immense power. Pushing down on the gas pedal results in a sensation that’s like the roll-on of a big commercial jet with an ex-military pilot at the controls. You feel a swell of thrust as you ease into the throttle. Suddenly, you’re doing 90.

And that’s the standard, non-supercharged engine.

I’d personally enjoy a manual transmission but the Jag’s six-speed automatic is impossible to fault. In Sport mode it not only becomes more aggressive, it intuits your intentions – for example, holding a lower gear for an anticipated fast pass you haven’t actually begun to make yet. It is a “smart” transmission with its own computer brain that judges how it ought to behave based on how you’re driving, including factors such as the aggressiveness of throttle inputs and steering angles.

The only thing it doesn’t do is chirp the tires on the 1-2 upshift.

Probably, this could be adjusted.

Handling feel is superb in part because the car is not unreasonably heavy – about 3,800 pounds for the coupe. Compare this with the hulking Benz SL550, which weighs more than 4,200 pounds. Even with driver and passenger aboard, the Jag is under two tons – while the SL550 with driver and passenger on board will be tipping the scales at about the same weight as a mid-sized V-8 SUV.

All thanks to its mostly aluminium (as the Brits say) body.

Add an auto-adjusting suspension and you’ve got a car that is as ideal for a lazy drive all the way from LA to San Francisco on Pacific Coast Highway as it is capable of keeping up with a BMW M6 – or even a 911 Porsche – when the pace picks up.

The XF is a stunning car – a machine you can spend many happy hours viewing from different angles, each of them immensely pleasing to the eye. Though the styling is modern, it is still clearly a Jaguar – the iconic lineage of drophead coupes and E-types mirrored in the curves.

One design touch that helps give the car its slinky proportions is the ratio of length to width and height. The XK is a full 3 inches wider than the Benz SL550 (and an inch-and-a-half wider than the BMW 6). It also rides on a long 108.3 inch wheelbase, similar to the BMW 6 (109.4 inches) but it rides about two inches lower to the ground.

The end result is a car that’s feline in its gracefulness and poise; an aluminum-paneled incarnation of its namesake.

The only thing I’m not a huge fan of is the Jaguar rotary controller for the transmission. It’s definitely nothing like the old dog-leg design that everyone complained about – but whether the knob is an improvement is debatable because it makes what ought to be a simple function overly complicated.

Here’s the process: You get in, key the engine to life by pushing the start button on the dash. This causes the rotary knob on the center console to gently (and slowly) rise up to meet your hand. This takes a second or three.

Only now, you can rotate the knob to the desired range – Drive, Reverse and so on.

It’s neat to watch, no doubt – but if you are someone who likes to jump into your car and just go you may be irritated by the slight delay you have to wait through before the system will let you put the car into gear. It’s like those auto-closing tailgates many SUVs have. They take seemingly forever; so much simpler to just yank the gate closed by hand – or throw the transmission into gear.

Plus, when  – not if –  the system develops a problem, the car will be stuck – and probably very expensive to repair. The latter may not matter to the clientele in this price range, but hassle is hassle no matter you’re net worth.

No one likes to be stuck by the side of the road waiting for a tow.

In Jaguar’s defense, all the cars in this price range have something similar. BMW, for example, has that infernal iDrive mouse; Mercedes its aneurism-inducing COMAND interface.

It’s partly due to the tech-lust of some buyers and partly due to the manufacturer’s perceived need to make their six-figure cars different in every conceivable way from $20k Prolemobiles, many of which now come with or offer many formerly high-end-only features, including remote/keyess start, GPS and automatic climate control.

Regardless, the fact remains that pulling on a shift handle to place the transmission in Drive or Reverse works. It is straightforward; it gets the job done. Why fool with it?

The XK’s back seats are Not Fit For People – even kids. There is literally zero clearance between the backs of the front seats and the seat bottoms of the back seats – so no place for legs at all. To sit back there, you’d need to assume the fetal position, with your knees tucked up against your chest.

On the other hand, the fact that there is at least some potential cargo space back there makes the XK more everyday useable than two-seaters like the Benz SL550 or Porsche 911.

Another plus: The XK’s actually got a bigger trunk than the hefty Benz SL – 12 cubic feet vs. 10 for the Benz.

The BMW 6 is bigger inside and out (including trunk space-wise) than either.

It used to be said in defense of Jaguar’s historically iffy reliability that a Jag still looked better on a mechanic’s lift than most cars do on the road. The good news is that after Jaguar partnered with Ford (since divorced) the quality control at Jaguar factories improved geometrically. Today’s Jags are on par, quality and reliability-wise, with comparable models from other high-end manufactures like BMW and Benz – both of which have had their own troubles, including BMW’s iDrive controller and the buggy software that runs it.

Even if you assume the Jag will need service more often, you could  use the leftover $20k for a pair of first-class, round trip tickets to Europe.

By the time you get back, your Jag will surely have been tuned-up, waxed and gassed.

Buying a Jaguar used to be mostly an emotion-driven experience that sometimes came with a few headaches later on.

You can still get just as carried away – but now you won’t regret it in the morning. 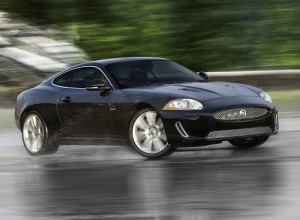