By the mid-1970s, American automakers were under the gun to reduce both the size and the fuel consumption of their offerings. Gas shortages, price spikes – and the growing presence of Japanese competition – were having the same effect on Detroit’s lead sleds that the Chixilub asteroid impact had on the dinosaurs some 60 million years ago.

Still, traditional American rollers weren’t going down without a fight. AMC may have been forced by circumstances to drop the Ambassador after the ’74 run, but it still had a plus-sized contender in the Matador.

This model first appeared in ’71 as AMC’s then-middleweight, replacing the Rebel. It was available three ways: hardtop coupe, sedan or wagon.

By 1975, when it officially succeeded the Amabassador, Matador had become AMC’s “big car” – and would carry the flag through 1978. Police variants survived in fleets well into the ’80s – on the strength of their huge-for-the-times 401 cube V-8s with more than 200 hp and 130 mph top speed capability.

Sedans and wagons rode on a 118 inch wheelbase, so they were actually about two inches longer than the early Ambassadors of the ’60s. By the standards of the mid-late ’70s, this was an enormous vehicle. And compared with today’s cars – which on average have wheelbases around 110 inches – the Matador was (and remains) a monster.

Most people remember the coupe more so than the sedan. It – unlike the Ambassador coupe – rode on its own, unique modified and shortened 114 inch wheelbase.

By ’74, it had become a separate model in its own right.

No convertible was ever offered by the factory, but you could opt for a very groovy vinyl-covered landau roof.

Two unusual variants offered in the mid’70s were the Oleg Cassini and Barcelona editions. The first was named after one of Jackie O’s favorite haute couture stylists and came painted tuxedo black, copper or white with matching landau roof. Inside these models had their own special interiors with deep pile copper carpeting and copper buttons on the seat upholstery. Oleg Cassini’s signature graced the glovebox and trunk lid – and Cassini himself helped promo the car in AMC advertising.

The Oleg Cassini edition was available for just two model years, from 1974 through 1975.

In 1976, the Matador Barcelona edition appeared. Like the Oleg Cassini edition, it was designed as a response to the Chrysler Cordoba, Pontiac Grand Prix, Buick Riviera and other large personal luxury coupes of the time. It was even more over- the-top than the Cassini edition and featured two-tone Ginger Metallic and Sand Tan (’76) or Autumn Red Metallic/Claret Metallic (’77-’78) paint with crushed velvet upholstery inside.

AMC also upgraded the handling attributes of the car with front and rear anti-sway bars plus large-for-the-era GR78x15 radials on slotted mag wheels unique to this model.

In ’78, buyers could order the Barcelona package on Matador sedans, too.

Wagons, meanwhile, had their own slew of special features – including a rear-facing third row bench seat (a feature that today’s safety-uber-alles culture would never tolerate).

It’s not well-known, but a high-performance Matador Machine was available – though just briefly.

Machine coupes – of which fewer than 50 were made – featured hopped-versions of the 360 and (later) 401 V-8s, with dual exhaust – as well as a heavy-duty suspension package and trim upgrades. Unlike the Rebel Machine, however, the wild red-white-andblue paint and decal package wasn’t used.

These cars were capable of 8 second 0-60 runs and ate up the quarter mile in 16 seconds flat.

In ’72, the formerly Ambassador (and Machine) exclusive 401 became available across the Matador line, but was now rated at 225 hp. However, the power drop was at least partially “on paper only” – and probably due to the new way horsepower was rated and advertised.

Previously, automakers had been permitted to tout an engine’s output as measured on a stand, with no power-sapping accessories or exhaust – and often, with a “tune job” that did not reflect what an actual production engine, as installed in the car, delivered. The new SAE net horsepower ratings gave a more realistic measure of an engine’s output. Still, there probably was at least some actual power loss as AMC, like everyone else, dialed back on compression ratios and camshaft profiles to comply with getting-stricter federal emissions requirements and the public’s desire for more efficient vehicles.

Still, to its enduring credit, AMC bucked the general trend toward less and less powerful engines – at least for awhile. In 1973, the output of the Matador’s optional 401 climbed to 255 hp, which for comparison was 5 hp stronger than Pontiac’s standard 455 V-8 and the Chevy 454 “big block” that powered the Corvette. The Matador’s 360 V-8 also jumped to 195-220 hp vs. 175-195 the previous year. These were among the strongest factory-spec engines available in an American car that year.

Dual exhausts were also history at AMC – and everywhere else.

Despite this, AMC found plenty of willing Matador buyers. In ’75, some 49,890 coupes and sedans (with V-8 engines) were sold. Add wagons, and Matadors with the in-line six to the mix, and total production for ’75 rises to more than 60,000 units.

By ’77, however, the Matador was beginning to feel the pinch. Its 360 V-8 had been emasculated to a rather desperate 129 hp, which in a nearly two-ton coupe resulted in equally desperate acceleration. AMC was trying to keep the Matador in tune with the times, but big cars must have big engines and the enfeebled 360 was simply no longer up to the job.

Though hp got bumped a bit to 140 (from the top-of-the-line 360) buyers had lost interest in the unusually styled – and now under-powered – Matador. Only about 6,800 coupes and sedans were made that year. Wagons did better, with 3,746 of them finding homes.

Collectors have focused more on the sportier, smaller AMX and Javelin but one can acquire a perfect or near-perfect Matador for a fraction of the cost. Score one of the unusual and rare-to-find today Oleg Cassini or Barcelona versions and you’re all but guaranteed to be the only person in your county (maybe your state) who owns one.

* The 401-powered Matador police car was capable of reaching 60 mph in about 7 seconds and had a top speed of nearly 130 mph – making it one of the quickest and fastest police vehicles of the 1970s.

* A Matador had a starring role in the James Bond movie, “The Man with the Golden Gun.”

* Matador Machines are extremely rare, with no more than two or three thought to still be in existence.

* AMC’s advertising slogan in the early ’70s was “What’s a Matador?” 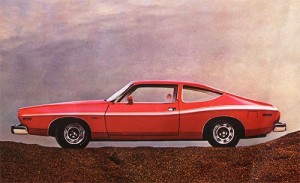