“Used” is the international language of the used car salesman.

Those fluent in Used can decipher the critical modifers that sellers use to convey subtle details about the condition of the vehicle they’re trying to sell. Or unload, as the case may be.

Those who don’t speak Used can get into real trouble – like the drunken Americano who doesn’t know the difference between “Hombres” and “Senoritas” when it’s time to hit the bathroom in Tijuana.

Here, then, is a practical guide to Used:

“Must see to appreciate” –

What a brutal life this car has suffered. The seller doesn’t want to talk about it, either. He knows a quickie $150 re-spray from Maaco can dull the intelligence of many a 17-year-old boy, who will see a shiny paint job and (hopefully) fall in love long enough to separate him from the last eight years’ worth of his lawn-mowing money.

For a car with more miles on it than Joan Rivers. Pay no attention to the 212k on the odometer! It’s had regular oil changes… . Never mind that everything else also has 212k on it – and oil changes or not, this car will nickel and dime (and $10 and $20) you into the po’ house before six months go by.

Former media test car subjected to more repeated floggings than an inmate of Abu Ghraib. Each week, a different journalist has speed-shifted, clutch-dumped, drifted, parking brake U-turned, redlined, top-ended, 0-60’d the thing – sometimes more than once each a day. The dealer wants to get it off his hands – and into yours – before the warranty runs out. Run, son!

Recenty washed by sulky teenager with a dirty rag in a bucket of dirty water. Vacuumed out by the same teenager, who also sprayed down the interior with Febreze, just for you. If you’re lucky, you wont find evidence of what he did in the backseat with his girlfriend last Tuesday.

Waxed (and dipped in Armor All). The engine compartment has been pressure washed and the undercarriage  “detailed” – that is, spray-bombed with black paint to hide all the rust.

New spark plugs and a can of “Motor Honey.” Or maybe Jethro pulled it – and replaced it with a $250 Salvage Yard Special with even higher mileage than the locked-up original unit.

The car needs a new engine or transmission. Magicians call this midsdirection. It’s the key to their act – and the used car seller’s con.

I’m really sick of this car. I want it to be you heartache, not mine. Come n’ git it!

The car was bought at a fleabag wholesale auction and the seller hopes to turn a fast buck by selling it to you for $5,000 more than he paid for it. In the biz, these guys are known as curbstoners. They’re even sleazier than the leaziest used car dealer.

It will run just long enough to drag itself off the dealer’s lot. After that, it’s your problem, chief.  That 30 day guarantee on the window? It’s as worthless as a politician’s promise – and you’ve got just about as much chance of holding the seller to it.

You lose. What can go wrong, will go wrong. And will be all on you. too.

An  ’88 Honda Accord with higher mielage than the space shuttle. But it runs real strong… .

The engine smokes, but the car has AC and power windows. 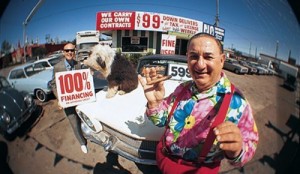 The Real Definition of Terrorism