No one wants to step into automotive doggie doo-do. It’s much harder to get rid of a crappy car than it is to wipe crap off your shoe, after all.

So – how to avoid the stink pile? Lookee here:

You should always profile the current owner of a car you’re thinking about buying. Stay away from po’ folks – and cheap folks. People who don’t have money or who are over-tight with money can’t (or don’t) pay for regular maintenance like oil/fluid changes – and that’s probably the single biggest decider as far as the current condition of the car, as well as its prospects for a long life (and expensive repairs down the road). If the guy selling the car looks like he’s got an EBT card in his wallet – or his place looks like a dump – you don’t want his car. Move on.

How does the car look? If it’s shabby and sad-looking and the owner clearly didn’t care enough to even wash and vacuum the thing, it’s a clue the car probably hasn’t led an easy life. But the flip of this is to be wary of the super-clean, detailed car – the one with the Armor-all’d tires and steam-cleaned engine compartment and black spray paint-bombed undercarriage. It’s the oldest used car trick in the book. People fixate on shiny and clean – and don’t notice the wavy bodywork or the find the rust in the floorpans and the sludge in the engine – until it’s too late. What you want is a car that looks normal for its age/mileage. Not too clean, not too dirty. And most definitely not like someone just spent a weekend trying to scrub off the past five years’ worth of hard living.

If you buy from a private seller, he should have records and receipts available for work done to the car. If he doesn’t, don’t trust anything he says about how often he changed the oil or that the car had a complete brake job just last month. A dealer may or may not have service records available. If not, don’t take him at his word, either. Always assume the worst – that the seller (private or dealer) is trying to screw you. Cynical? Surely. But better cynical and safe than sorry.

Be suspicious of any deal that sounds too good to be true – because you can bet it probably is. The vehicle you’re looking at should be priced within 10 percent (either way) of current retail values. At the higher end of the range if it’s an exceptionally nice example, with low miles and lots of options; at the lower end if the miles are high and the condition’s just so-so. It’s true that every once in awhile (typically, once in a lifetime) you’ll stumble across a fantastic car at a fantastic price. But most people are pretty cagey when it comes to knowing the value of what they’ve got and aren’t going to let you have it for much less than the going rate – unless there’s something not quite kopacetic.

Certain things should have you beating feet as soon as you notice them. These include signs of overspray on trim (the car has been repainted and was probably wrecked), any signs of overheating (could be just a thermostat – but it might be a failing head gasket), “check engine” light stays on (emissions issue – they can be expensive and in some states, the car can’t be registered until the light is off and the car passes smog check), it “tracks” funny (wheel off-center or the car pulls to one side as it goes down the road – signs of possible suspension problems or accident issues), blue smoke anytime (evidence of a worn engine), noisy/slipping clutch (hello, expenso), wetness inside/moldy smell (it leaks when it rains or the radiator core is spitting coolant onto the carpet), clicking noises at idle (worn valvetrain)… basically, anything that feels wrong or doesn’t sound right probably is (or isn’t) and you should take that as your cue to shop another car.

Bottom line: Unless it’s a hard-to-find collectible, there’s no reason to jump at the first (or second or fifth) car you check out.

Waiting for the right one is always time well spent. 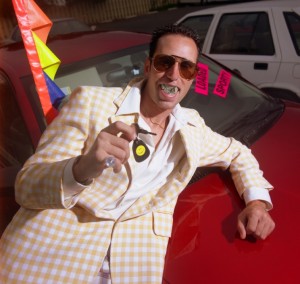 The Whole “Terrorism” Thing’s a Con