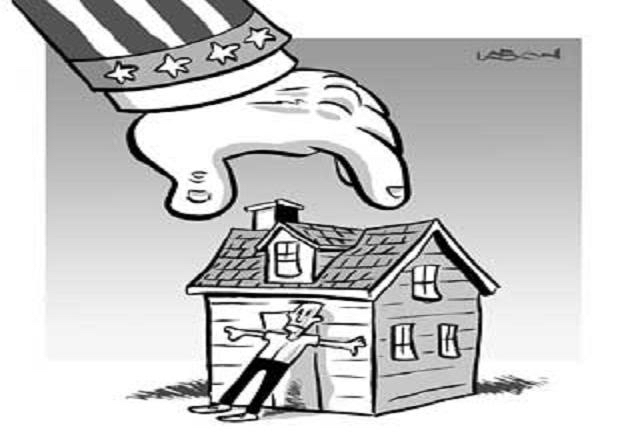 Fascism is fundamentally about economics – not racism. It is when Big Business “partners” with Big Government (it’s no accident we hear that word routinely now) to steal money rather than earn it through the free exchange of goods and services.

Examples include Elon Musk and his Tesla electric car operation – which depends entirely on mandates and subsidies – but also GM and the mainline car companies, who are just as guilty of “partnering” with the government as Tesla to mulct the citizenry for their benefit, even if their product (unlike Musk’s) is fundamentally sound and could sell on the basis of free exchange.

The bailouts circa 2008 are the obvious example.

Rather than take their lumps GM filched our pockets, using the government’s hands in our pockets. Whether the money was “paid back” is irrelevant to the moral issue at hand; a guy who mugs you in street but sends you a check later on has still mugged you – even if he includes an apology note with the check. 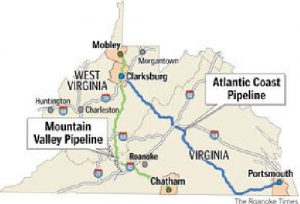 Another example of American fascism – and one that’s arguably worse than subsidizing Tesla or bailing out GM – is the use of eminent domain to steal people’s land using government’s guns (and courts, to rubber stamp the theft) for the sake of private gain.

It is happening here in The Woods, rural Southwest Virginia – home of your Libertarian Car Guy.

A private company demands that private landowners stand aside and watch as the company sends men with chainsaws onto what was their land, to cut down swaths of forest, followed by heavy equipment to install a natural gas pipeline that will deliver no natural gas to anyone in the county or any county in the vicinity of the county.

Instead, the gas will flow far, far away – to be sold for the private profit of the gas company. 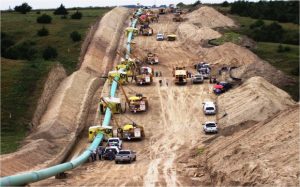 When the landowners said objected, the pipeline company called up its “partner” to make them an offer they couldn’t refuse. Armed thugs arrived. The landowners were forced to step aside.

Like taxes (theft of money) eminent domain (theft of land) was initially justified by limiting it.

Property was only to be seized for the “general good” (as defined by those doing the taking). But it usually meant things like right-of-ways for roads, which did at least provide some plausible benefit to the people in the area.

That in no way changes the fact that a crime has been perpetrated under color of law against the former owner of the land.

Taking is taking – just as theft is theft. 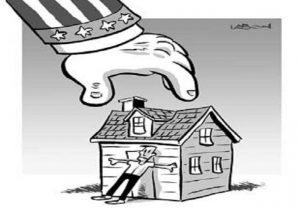 But now the taking is being done without even the flimsiest pretext of some benefit to the local community. If anything, the community is diminished by the land-rape, the ruination of views, the trampling feet (and loud, obnoxious heavy equipment) brought to bear by the pipeline company – which will make hundreds of millions of dollars on their end of the “deal.”

It is halting. Like that scene in Deliverance, when the gun-wielding hillbilly rapist tells Ned Beatty: “If we want your money we’ll take your money.”

How is this meaningfully different?

Worse, it’s precedent setting. If this stands – and it appears it will stand – then logically, why shouldn’t private companies be able to take more land – any land, as much land as they like – for other privately profitable purposes?

Can anyone produce a logical reason why not?

One thing always follows another thing. In law especially. Precedent matters. The reason why we can’t take a trip by airplane without submitting to degrading – and completely random, probable cause-free and thus unreasonable searches is because a precedent was set decades prior that the Fourth Amendment’s plain language prohibiting such things can be set aside whenever the government decides it is in the “interests” of the government to do so.

A police state doesn’t come into being overnight. 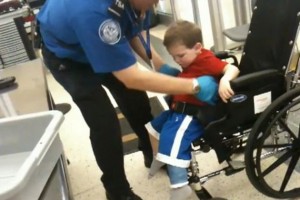 Because we put up with it, rolled over. For saaaaaaafety.

Will we we roll over for this?

Probably. In part, because people are able to speak of the unspeakable by using euphemisms to enable them to politely discuss the despicable.

And like taxes, eminent domain – once permitted at all – inevitably becomes openly monstrous. It is no different than countenancing a little rape.

Or rape only on Sundays once every April. 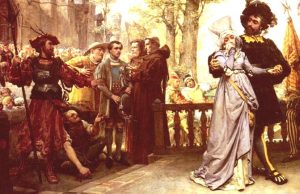 Remember: People are not being “asked” to sell their land any more than they are “contributing” to Social Security or are the “customers” of the DMV.

Their land is being taken from them.

The fact that the victim of an eminent domain seizure is “compensated” changes nothing. Would anyone countenance rape if the rapist compensated his victim? Gave her an amount he deemed “fair” for the taking by force of her body to satisfy his need?

If that is a moral outrage, why is eminent domain not?

Perhaps someone will explain it to me.

Cars That Parent Us