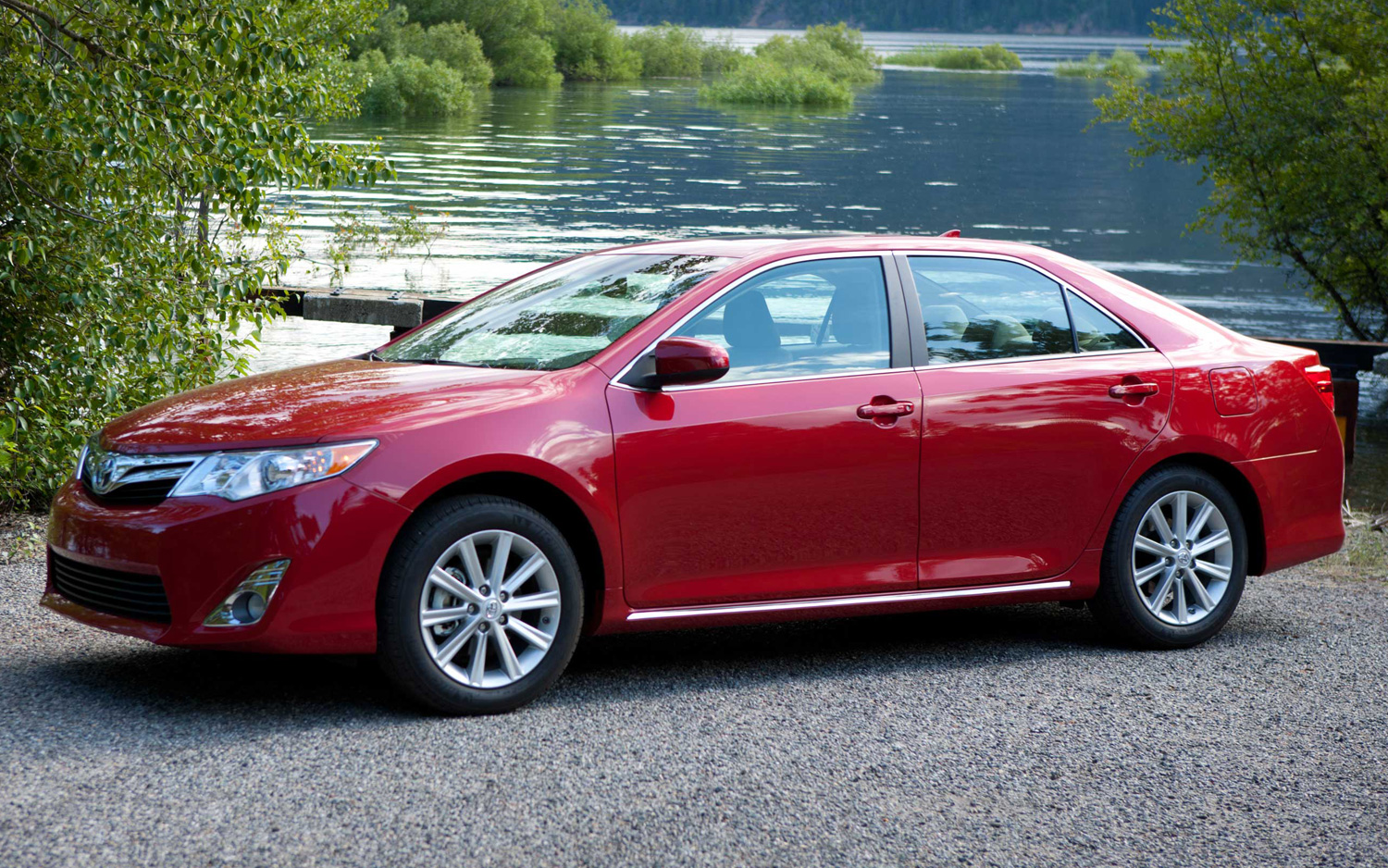 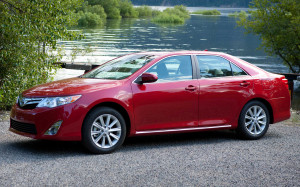 Ask yourself how many gallons of vanilla ice cream get sold in a given year.

For the past 12 years, it’s been the best-selling mid-size/family car in America.

There are more exciting “flavors” available now – but for literally hundreds of thousands of people every year, the Camry has been the go-to choice in this segment.

But given the increasingly excellent competition – including the latest Honda Accord and the Hyundai Sonata – will they continue to go to it? 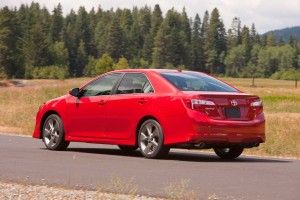 The mid-sized Camry may be feeling the heat, but even if it loses its best-seller title, it will always be one of the most successful cars ever made – the “crown” (literally, the name is an anglicized version of the Japanese word for crown, kanmuri) of Toyota’s passenger car product portfolio since 1982.

Historically – and currently – it is a more middle-of-the-road car than sexier rivals like the Honda Accord (and more recently, the Hyundai Sonata), attracting family-minded buyers with its quiet looks, soft ride, high fuel economy, low depreciation rates and a reputation for being as reliable as an anvil.

Toyota touts the fact that 90 percent of all Camrys sold over the past ten years are still on the road. 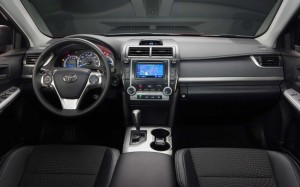 Three is also a hybrid version, which will be reviewed separately.

For 2014, the Camry gets the latest version of Toyota’s Entune suit of apps – with a free subscription included, along with an updated 6.1 inch LCD touchscreen monitor. 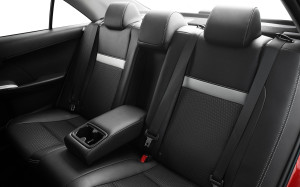 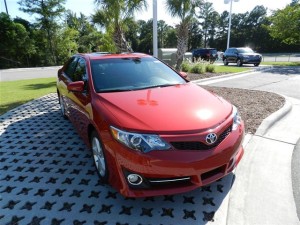 Competitors are more interesting to look at.

Accord, Sonata and Altima all cost less. 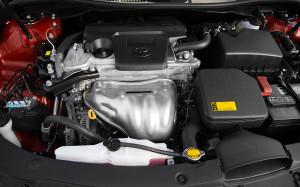 Both engines are slightly under par for the segment, both in terms of power output/performance as well as fuel-efficiency.

But the competition does better.

The new Honda Accord, for example, comes standard with a 185 hp, 2.4 liter four that gets the car to 60 in about 7.5 seconds – that’s almost 1 full second quicker than the four-cylinder Camry – while also delivering a very impressive 27 city, 36 highway. (You can also get the four-cylinder Accord with a six-speed manual transmission. The Camry and pretty much all the others in this segment are automatic-only. However, gas mileage with the manual transmission dips to 24 city, 34 highway.) 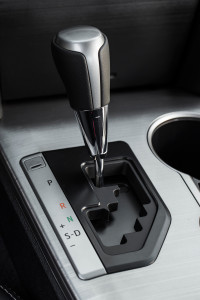 There’s also the Nissan Altima – which comes standard with a 182 hp, 2.5 liter four that delivers a similarly speedy 7.8 second 0-60 run – along with an even more impressive 27 city, 38 highway EPA rating.

Probably, the better EPA numbers posted by the Accord and Altima are due to the efficiency advantages of the continuously variable (CVT) automatics that are standard in those two. Note that the Hyundai Sonata – which comes standard with a conventional six-speed automatic – registers a more Camry-esque 24 city, 35 highway. Ditto another competitor without a CVT, the Ford Fusion. Like the Sonata, it comes standard with a conventional six-speed automatic – and carries a so-so EPA rating of 22 city, 34 highway. Sames goes for the 2.5 liter, 197 hp-equipped Chevy Malibu: Six-speed automatic  . . . 22 city, 34 highway.

All else being more or less equal, a CVT-equipped car will usually eke out 2-3 more MPGs than the same car with a regular six-speed automatic. Now you know why so many car companies are going with CVTs rather than conventional automatics. It’s a little surprising that Toyota hasn’t jumped on the CVT bandwagon. But there’s an upside to that – which I’ll get into below. 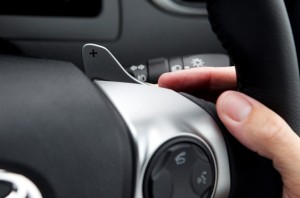 The V-6 Camry does outmuscle the turbocharged, 2.0 liter-equipped Chevy Malibu (259 hp) and gets slightly better mileage on the highway – by 1 MPG (21 city, 30 highway for the Chevy). But it’s a hair-splitting difference – and that’s not good news for Toyota. 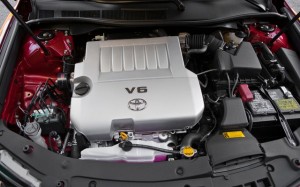 Same goes for a stack up against the Hyundai Sonata. When equipped with its 274 hp turbo 2.0 liter engine, it matches the Camry V-6’s 0-60 run and posts slightly better EPA stats: 22 city, 34 highway.

One of the few competitors the Camry still clearly beats when it comes to MPGs – and performance – is the Ford Fusion. Like the Hyundai Sonata and Chevy Malibu, it doesn’t offer an optional V-6 but does offer a turbo four as its optional engine. Two turbo fours, actually. The strongest of these is a 2.0 liter, 240 hp unit that delivers a so-so 6.9 second 0-60 run and an even more so-so 22 city, 33 highway. There is also a smaller 1.6 liter turbo engine capable of 23 city, 36 highway – but so equipped, this version of the Fusion needs almost 9 second to get to 60 – putting it well behind the base four-cylinder Camry.

One thing the Fusion does offer, however, that none of the others in this segment do is all-wheel-drive.

The Camry, Accord, Sonata, Malibu and Altima are all FWD-only. 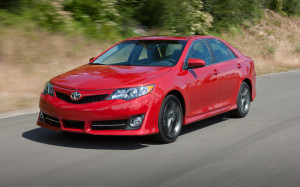 The four cylinder-equipped Camry strikes a pretty good balance between economy and performance. Even if it does give up a couple of MPGs relative to competitors like the Accord and Altima, I find the operating characteristics of the Camry’s conventional (hydraulic) six-speed automatic preferable to the CVT automatics used in the Honda and the Nissan. CVTs are an acquired taste. They have their upsides – fuel economy, obviously. And also the absence of “shift shock” – because there’s no shifting going on. But that brings us to the downside of the CVT: Instead of transitioning through first, second, third, fourth – and so on – the CVT lets the engine rev fairly high up the scale – close to redline, if you’ve floored the accelerator – and will hold it there as long as you keep your foot down. The result is – typically – a fair amount of noise and the accompanying feeling that the engine is working really hard.

The Camry’s six-speed automatic, in contrast, works quietly through each gear, bringing you up to cruising speed without bringing the revs up so high – nor holding them there so long. Even when you do floor it, there’s less sturm und drang. Personally, I’d give up 2-3 MPG in exchange for the more pleasant operating characteristics of a conventional (and well-sorted) automatic like the Camry’s.

The V-6 Camry is very competitive, performance-wise, with all the optional-engined cars in this class except for the V-6 Accord, which is almost muscle car quick while managing to be almost economy-car efficient.The Accord’s V-6 is also paired with an excellent, non-CVT six-speed automatic transmission (the V-6 powered Nissan Altima gets a CVT).

I would choose the naturally aspirated V-6 Camry over the turbo four versions of competitors like the Sonata, Malibu and Fusion because the big V-6 is understressed – and so will probably last longer and cost less to maintain as time rolls by, especially after the warranty runs out. In order for those little fours – which are about half the size of the Camry’s V-6 – to make equivalent-to-V-6 power, they are force-fed via the turbo. The engine is worked harder to make the same power. The car companies claim these new turbo fours have been built extra-tough to last just as long as power-equivalent, non-turbo’d larger displacement engines. 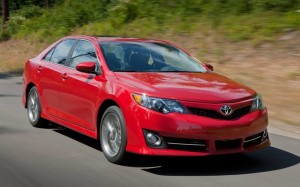 On ride and handling and general driving: The Camry’s ride is smooth and quiet – which is equally true of all the other cars in this segment. The difference between the Camry and others in this segment is that it’s noticeably softer (except SE trims, which have firmed up suspension calibrations) which is nice on the highway but with the downside that on curvy roads it’s got noticeably more body roll than is typical of cars in this class. It’s been said that the Camry is the best Buick Regal ever built by the Japanese – and there is truth in this statement.

But, dowdiness has its upsides, too. The Camry may not be as sleek and slick as, say, the new Sonata – but because its side and rear glass is more upright, visibility is excellent because blind spots and limited fields of vision are few. The seats are also a nice balance between supportive and soft. The Camry is still one of the best highway cars around. I’d also lean toward it for everyday stop-and-go commuting, too – for the same reasons. 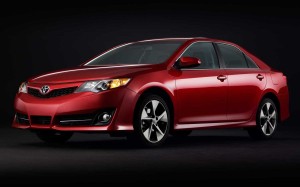 Camry is like the girl you bring home to mom – which is no doubt why moms really like the Camry. It may not have the flash factor of the Accord or the Sonata, but it’s got some long-haul character traits that are easy to appreciate. For instance, the balance between front and rear seat legroom. Camry’s got 41.6 inches up front and 38.9 in the back. Both rows are very comfortable for standard-sized adults.

In the Hyunda Sonata, the driver and front seat passenger enjoy Mercedes S-Class legroom – 45.5 inches. But those unlucky enough to be relegated to the Hyundai’s back seats will be dealt the cruel hand of 34.6 inches of legroom – which is two inches less than you’d get in the new Corolla (a compact-sized car).  The Chevy Malibu also has a scrunchier back seat: 36.8 inches. 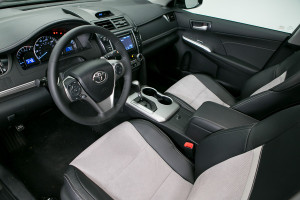 Unfortunately for Toyota, the new Accord took a page from the Camry’s playbook. It has more legroom up front (42.5 inches) and virtually the same legroom in the second row (38.5 inches). However, the Accord’s sexier silhouette does impinge upon headroom – of which there is noticeably less in the second row (37.5 inches vs. 38.1 for the Camry). This – less back seat headroom – is also true of the Malibu and Fusion.

The Camry’s updated interior is sportier-looking than before – with a pod-type central cluster housing three overlapping gauges. An interesting departure form the norm is the analog fuel economy gauge, to the speedometer’s right. Instead of ridiculous “instantaneous” readings of 90 or 100 MPG – which you get with digital fuel economy gauges. Instead, the fuel gage-like needle gives you the average, as you drive. 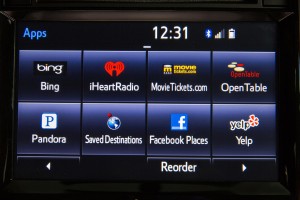 The new LCD screen in the center stack – and Toyota’s decision to provide Entune subscription and apps for free – is another nice touch. I also liked the offset (toward the driver) gear shifter, the removeable center piece for the cupholders (which allows for larger – or smaller – cups) and the conveniently located iPod pigtail (in the cubby ahead of the shifter instead of the glovebox or the harder-to-reach-while-driving storage box under the center console armrest).

The Nissan Altima has the same-sized (15.4 cube) trunk. 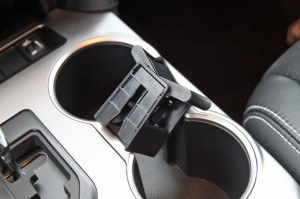 All trims – including the base L – come very well-equipped, with most of the things most people would consider essential included: AC, a nice six-speaker HD stereo with satellite radio and USB ports, power windows and locks. Toyota also includes cruise control – a feature that in some cars is bundled with optional equipment or which you’ve got to buy the next-up trim to get.

A sensible touch is the L’s 16-inch steel wheels – with plastic trim covers. For a family-car, this makes a lot more sense than 17 or 18 inch alloy wheels, with harder riding (and faster wearing) short sidewall “sport” tires. (Though if you want ’em, they’re standard with the SE, which also gets a firmer-riding suspension to go along with them, as well as a more aggressive-looking front end treatment.)

You can drive home in one of these for well under $30k – which is a deal by any standard. 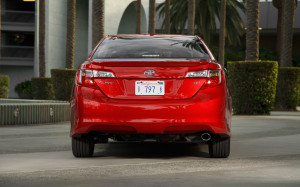 The Camry’s only real weakness is that it’s no longer the clear go-to choice in this segment. There are other, equally excellent choices that offer most of the good things you get in a Camry – with some additional extras (such as more performance/better gas mileage) thrown in. The Toyota still has the inertia that comes with being numero uno for so long it’s almost become an institution. That will help maintain sales, no doubt – as well as resale value.

But given how good it’s getting across the board, Toyota is going to have up its game if it intends for Camry to remain numero uno next year.