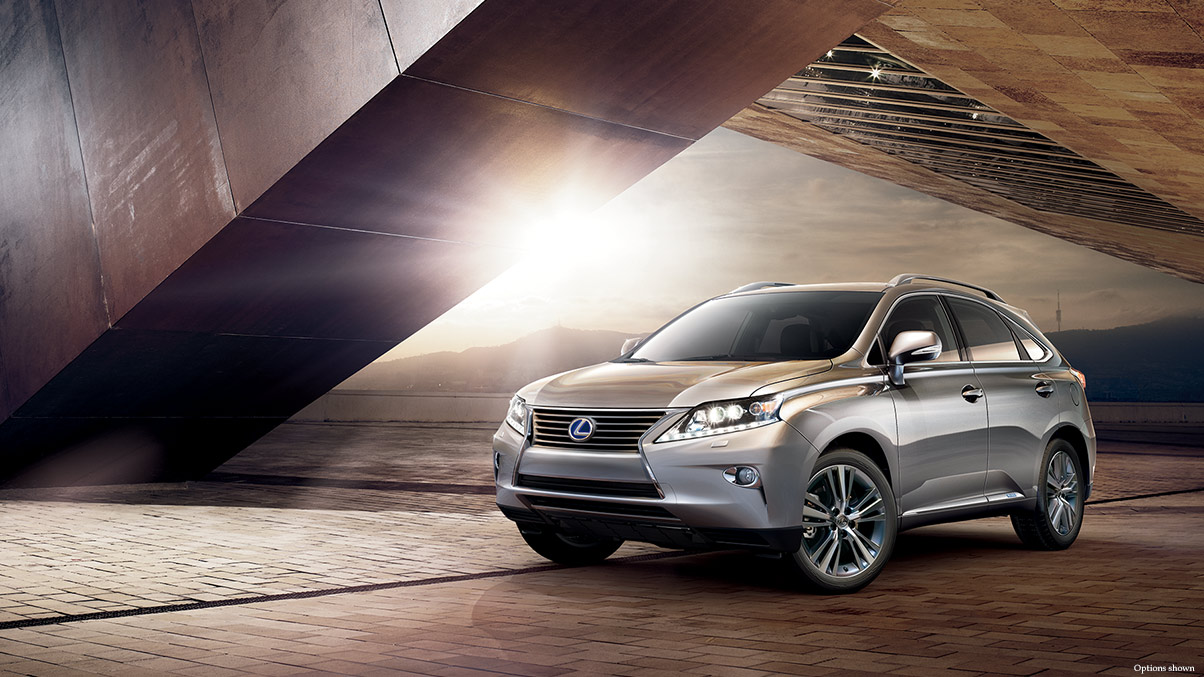 Hybrids are in a weird spot right now. 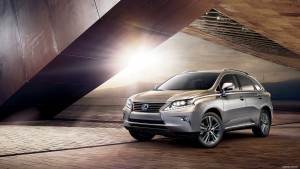 They’ve gotten very good – so good that many of them are now a nearly no-compromises (functionally) alternative to their conventional (gas engine-only) counterparts.

They’re quick, the don’t make weird noises – and (excepting the Prius) they don’t look weird, either.

But then, gas is cheap again. 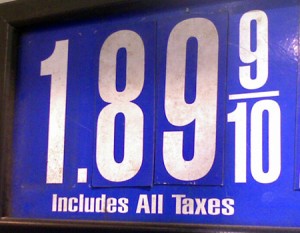 But is a difference of even 14 MPG – the RX450’s advantage in city driving, where it can make the most of its ability to run on battery power alone or at least, partially – enough to offset that $7,550 difference up front when a gallon of gas costs $1.89? 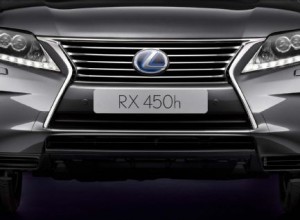 You’ll be driving for a long time before you run dry… or rather, break even.

The RX450h is the hybridized version of the hugely popular Lexus RX – which is a mid-sized, two-row luxury crossover SUV.

The hybrid version uses electric motors and a battery pack to take some of the load off the gas-burning V6 – and to supplement the V6’s power output when maximum acceleration is needed. The tandem power source (V6 plus the electric motors) produce 295 hp vs. the V6-only RX’s 270 hp and achieves a class-best 32 city/28 highway vs. the V6-only RX’s 18 city/25 highway (FWD versions).

The RX hybrid doesn’t really have any direct competition. 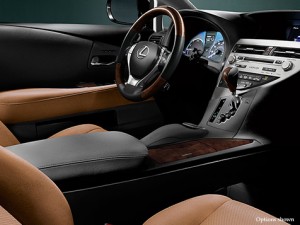 The Audi Q5, for example, is available in hybrid form – but it’s a smaller crossover. The Audi Q7 is available with a high-efficiency diesel. But it’s bigger – and more expensive($53,400) and not nearly as easy on fuel (19 city/28 highway).

This will be the final year for the current RX – hybrid and standard-issue. A redesigned RX is on deck for the 2016 model year.

It should be available by early spring next year. 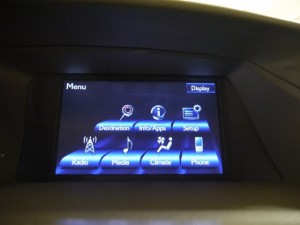 Meanwhile, the current RX soldiers on.

For its final year, the hybrid version comes standard with the formerly optional seven-inch LCD display in the center stack and the mouse-toggle input system has been redesigned for better ease-of-use – whether your right or left-handed.

32 city is better than some cars manage on the highway.

28 on the highway is better than some cars do in the city.

Seamless transition from electric to gas and in-between.

A not-bad deal… compared with sort-of rivals like the very quick but but very expensive (and very thirsty) Porsche Cayenne hybrid.

If you’re ok with something a little bigger – and more minivan-esque – the Infiniti QX60 hybrid (which has three rows) is a slightly less pricey alternative ($45,400 to start; $46,800 with AWD). 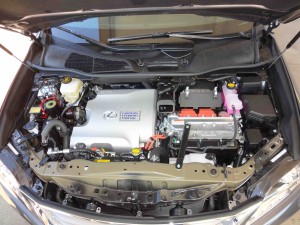 The RX450h has multiple motive sources – including two electric motors in the FWD version and three in the AWD version, plus a gas V6 and a battery pack. As in other hybrids, the system is designed to save gas by reducing vehicle’s reliance on the gas-burning engine, which can “go to sleep” at times, while the electric motors and battery pack take over.

The motors and battery pack also supplement the gas V6 when extra power is needed, as when accelerating to merge with traffic. This reduces the load on the V6, which reduces the amount of gas it requires. 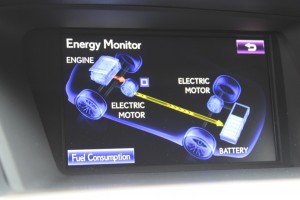 With 250 hp (combined output) on tap, the QX hybrid needs about eight seconds to get to 60, a slow-ish time for a luxury crossover SUV. 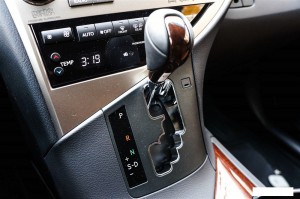 The problem for both of them – for all of them – is that the price of fuel has dialed back to 1990s-era Good Times numbers. In real terms, gas is probably cheaper today than it was at the height of the Good Times, when people were buying Hummers like corn dogs at the county fair.

In my area, as I type (mid-September, 2015), you can buy a gallon of regular unleaded for $1.89 – literally half what it sold for about six years ago, after the collapse of ’08. In inflation adjusted terms, a buck eighty-nine is about 50 cents less per gallon than gas was selling for circa 1999.

Of course, this may be a temporary respite. The price of fuel could double, just like that (as it already has done before). 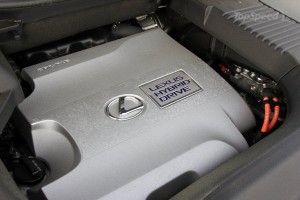 In which case, those who own hybrids will be sitting pretty.

But right now? It gives one pause.

That $8k difference in asking price for the RX450h vs. the RX350 is going to be hard to make up in fuel savings if gas prices don’t go up… dramatically.

Will gas prices go up? 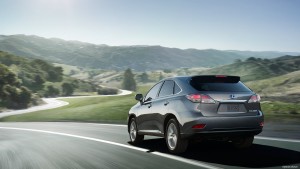 Lexus is Toyota – and Toyota is to hybrids what Audi is to all-wheel-drive. They have been at it longer than the rest – and (no surprise) are damn good at it.

The RX450h is a brilliant piece of work. The hybrid drivetrain can’t be faulted on functional grounds. In some ways, it’s superior to the gas-only RX350. For example, the hybrid’s ability to operate in what I like to call Stealth Mode. With the gas engine off, you can slink along silently, no sound attending your forward progress except the leaves rustling and the tires rolling (which you’ll only hear if you have the window down).

The gas-engined-only RX350 cannot do that.

It also cannot “idle” without its engine running – and running the electrically powered accessories(which are powered by the engine-driven alternator). 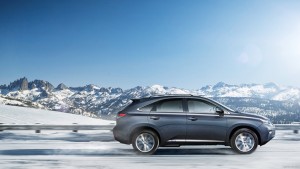 The hybrid RX also feels stronger, even if it’s not actually quicker. Because it launches harder – if you floor it – because it has more torque. Which is what electric motors have in abundance. Off the line (and part-throttle) acceleration is hearty – and easy. The V6-only RX feels as though it’s working harder – which it is. The 3.5 liter engine has less total power – and no back-up.

Which is also why it’s so much thirstier.

Paired to the 450h’s hybridized powertrain is a continuously variable (CVT) automatic – vs. the regular RX’s six-speed conventional automatic. It is more efficient (important in a hybrid) and much smoother, because there are no shifts (gear changes) just linear forward thrust. The harder you push down on the accelerator, the faster you go – like dialing up a rheostat. 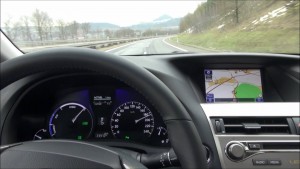 Some CVTs make unhappy noises. The RX450h’s almost noiseless. You hear the pleasant – but muted – song of the Lexus 3.5 V6 (one of the finest engines on the market) and that’s all. The gauge cluster’s background lighting shifts from deep blue (most efficient) to background black (red in non-hybrid RXs) when you’re really hauling the mail – but otherwise, there is little indication you’re doing – whoops! – 95 MPH now and climbing.

If you think “hybrid” means “slow” – think again. A high-dollar Prius, this isn’t.

The biggest threat to the RX450h, driving-wise, is probably the Audi Q5 hybrid – which is quicker (0-60 in the mid-high sixes) and feels a bit more nimble.  Which it ought to – because it’s smaller and lighter. The Q7 TDI, meanwhile, is a horse… a Budweiser Clydesdale – packing a 406 ft.-lbs. of torque diesel that has so much grunt it feels as though the Q’s front wheels get air when you floor the thing. It is a hoot to drive that beast. But the diesel is pricey ($53k to start) not nearly as fuel efficient (19 city/28 highway) and the Q itself is much larger (and even heavier than the Lexus).

A lesser contender is the Mercedes ML250 BlueTec diesel. It is not nearly as quick, though (about 9 seconds to 60) and its fuel economy (22 city, 29 highway) is also well below that of the Lexus. 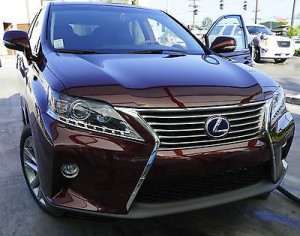 What was it Goldilox said about just right?

The RX450h is the only hybrid luxury crossover that’s mid-sized rather than full-sized (Q7, QX60) or compact-sized (Q5) and still mid-priced (unlike the mid-sized Porsche Cayenne hybrid) and delivers the mileage and performance it does.

It may not have a third row like the QX60 – but it has much more interior space than the Q5, including 80.3 cubic feet of total cargo capacity vs. 57.3 for the little Q. The smaller Q does have an impressively roomy back seat: 37.4 inches (vs. 36.8 for the Lexus) but that’s a slight difference compared with the cargo difference between the two. 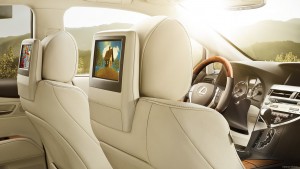 The bigger Q has more room … than the little Q. But still not quite as much as the Lexus (72.5 cubic feet of total cargo space) and slightly less backseat legroom than the little Q (37.1 inches).

The Benz ML is comparable, outside-wise and inside-wise. But it’s diesel engine can’t keep up with the Lexus’ hybrid system – either acceleration-wise or fuel-efficiency-wise.

So far, the RX’s “just right” size (and everything else) has served Lexus exceptionally well.

Given that, it’ll be interesting to see whether the almost-here (and redesigned) 2016 RX will grow a third row. Or sacrifice efficiency to become a little quicker. 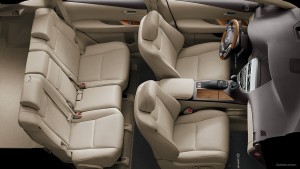 The hybrid RX gets a few unique exterior trim bits – including cobalt-blue backlit “hybrid” sill plates and “L” Lexus badges in the grille and on the rear liftgate.

Inside, the hybrid RX also gets its own hybrid-specific gauge package. Instead of a tachometer to the left of the speedometer – as in the standard RX – the hybrid RX has dial gauge with three positions: Charge, ECO and Power. When you’re running electric (including regenerative braking, during deceleration) the needle will show Charge – in blue.

Eco is the transition in-between, as when coasting – or when the gas engine is operating intermittently. You can observe this progress digitally rendered by calling up the “hybrid” display on the LCD in the center stack, too.

Beyond the special gauge package, the hybrid RX is laid out exactly like the regular RX. 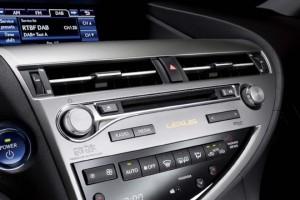 This includes the ergonomically designed mouse/trackpad input on the console. It is shaped to fit the natural curve of the human hand. Your digits operate the little toggle switch located toward the front of the unit, to highlight whatever function you’d like to access – such as satellite radio, apps or the GPs.

Then push to select.

It’s one of the best such system out there.

There is also a CD slot – an interesting retro touch but not surprising given the current RX is a few years old. Still, there are people who have CDs and don’t use Bluetooth or Pandora.

They will appreciate the slot. 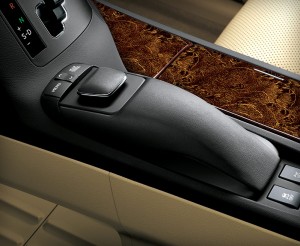 A handy (and uncommon) design touch is an additional cupholder built into the dashboard to the left of the steering wheel for the driver’s use.

One RX weak point – relative to its sort-of (because so much more pricey or otherwise compromised) competition is towing capacity. The RX hybrid can only pull up to 3,500 lbs. – in the same range as several mid-sized cars and on the light side for a mid-sized crossover SUV.

The Porsche Cayenne hybrid, on the other hand, can pull an impressive 7,716 lbs. – comparable to mid-sized, truck-based SUVs with V8 engines. 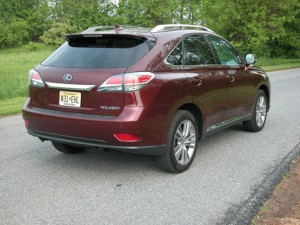 It’s still got mojo – but it’s biggest problem isn’t what it does so well.

It’s how cheap gas has become.