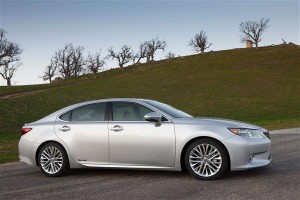 They kind of have to, when you stop to think about it.

After all, what person with say $40k to spend on a car wants to spend that on a slow car?

Being “green” only goes so far . . . after a certain price point.

Thus the new Lexus ES300 – the first-ever hybrid version of the hugely popular ES350. It is capable of almost-Prius fuel efficiency – 40 city, 39 highway – but it’s not slow like a Prius.

Or – and perhaps more importantly – the new Lincoln MKZ hybrid. 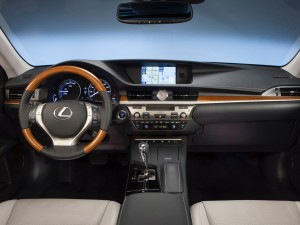 The ES300 is the hybridized (gas-electric) version of the Lexus ES350 – a mid-sized, entry-luxury sedan based on the Toyota Camry. It differs chiefly in being propelled by a four-cylinder gas engine/CVT/electric motor & battery powertrain vs. the V-6/six-speed conventional automatic that propels the non-hybrid ES350.

The ES300 also has hybrid-specific instrumentation, such as a charge-meter that converts to a conventional tachometer – and back to a charge-meter again (more below).

Although there are lots of hybrids on the market, the number of luxury brand hybrids is relatively small. The number of entry-luxury hybrids is even smaller.

The ES300’s main price (and status) and otherwise similar competition is the Lincoln MKZ hybrid – which starts at $35,925. 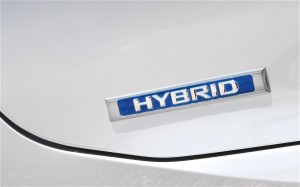 Much quicker than a current Prius.

Quicker than the Lincoln MKZ hybrid.

Traction/stability control is over-eager to step in – and can’t be turned off unless you stop the car first. 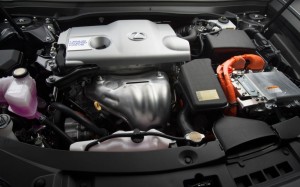 The ES300’s hybrid powertrain consists of a high-efficiency 2.5 liter gas engine, electric motor and onboard battery pack – all of them driving the front wheels through a Continuously Variable (CVT) automatic transmission.

This is more juice than the Lincoln MKZ hybrid’s 188 hp, so it’s not surprising that the Lexus is almost half a second quicker to 60: about 8 seconds flat vs. 8.4 for the Lincoln. What is a little surprising is that the hybrid ES300 – a mid-sized car – is also nearly as quick as its non-hybrid sport-sedan sibling, the IS250 – a compact car – which gets to 60 in 7.9 seconds (8.3 when equipped with AWD). These days, an eight second to 60 time is the threshold that separates slow from not-slow. Any car that takes significantly longer than 8 seconds to get itself to 60 is a car that can’t outrun $15k economy cars. If it is a $15k economy car, that’s probably acceptable. But when you’re driving a pushing $40k luxury car – hybrid or not –  it’s embarrassing to be outrun by $15k economy cars. So, the ES300 is at least quick enough… . 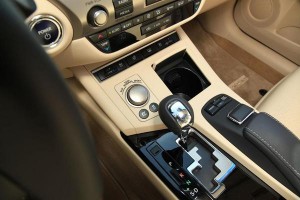 While the ES is quicker than the MKZ, it’s also less fuel-efficient. Its 40 city, 39 highway is very good (the non-hybrid ES350 manages only 21 city and 31 highway). But it’s not nearly as good as the exceptional 45 MPG – in both city and highway driving – that the Lincoln MKZ delivers. Nothing that’s not a Prius can touch the Lincoln when it comes to MPGs. That includes the most fuel-sippy of today’s subcompact economy cars, the very best of which deliver just over 40 MPG . . . on the highway. They typically average in the high 20s/low 30s.

The MKZ hybrid even outclasses diesel-powered cars when it comes to at-the-pump parsimony.

But on the other hand, it’s slow.

Lexus is betting that the ES300’s better-than-econobox performance and gas mileage will matter more to prospective buyers than the MKZ’s emphasis on fuel-efficiency uber alles. 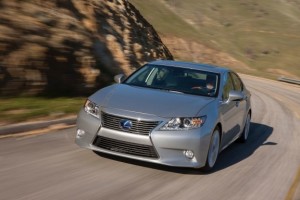 Like the first gen. Prius, the ES300 can be driven for short distances and at speeds of up to about 30 MPH on electric power only. To engage EV (electric vehicle) mode, you depress a button on the center console. If the batteries are fully charged up (it’s closed loop; you can’t plug this one in – for now) and you are verrry gentle on the pedal, you can creep along on volts alone for a mile or so. The system will automatically override and turn the gas assist engine back on when speed exceeds 30 MPH – or your right foot demands more rapid acceleration. Or the batteries are depleted beyond a certain threshold.

But unlike the first gen. (or current) Prius – or the Lincoln MKZ – this one also goes when you need it to. It’s easily 2-3 seconds quicker to 60 than a Prius – the current one – and also handles with plausible sportiness (not much body lean, fairly precise steering and a decently high lateral grip threshold) with one caveat: The traction/stability control is a more aggressive nanny than Mrs. Doubtfire. It also cannot be turned off if the car is moving. This can be annoying if you’re like me – and the urge to power slide the car through a decreasing radius curve occasionally wells up. The system will literally almost kill the engine in mid-corner. Fuel and spark are summarily turned off (or dialed back to next to nothing) while the ABS pumps furiously to negate the controlled drift you were attempting.  Your speed drops – and so does the fun. The good news is you can shut the bugger off – the traction/stability control – and have it stay off. It’s just not easy to shut it off. You must first bring the car to a complete stop, then press and hold the TRAC button until the dash light tells you you’re good to go. And you have to do this every time you want the nanny to stay in the background and let you control what the car does. All new Toyota-Lexus vehicles are similarly afflicted. 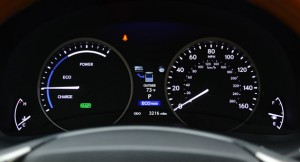 The ES300 has three selectable drive modes: ECO, Normal and Sport, which you engage by rotating (or pushing in) a knob on the forward part of the center console. It’s a set-up very much like that used in the GS350 sport sedan I tested a few weeks ago. Sport mode increases steering effort and sharpens throttle response, to make the car feel quicker – by causing it to respond more quickly to driver inputs. Normal is normal. In ECO, the AC and some other accessories go on low – in order to reduce the load on the drivetrain and thus maximize economy. 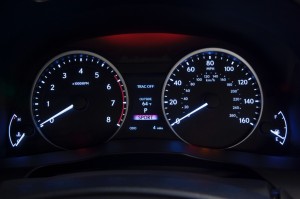 An interesting touch is the changeling tachometer/battery charge meter. In Normal and ECO mode, there is no tach to the left of the speedometer. The big dial indicates Charge – or Power – and states in between. But when you select Sport mode, the charge-meter disappears and is replaced – electroluminscently – by a traditional rev counter.

Backlighting also switches over to red.

My test car had both heated seats and a heated steering wheel – all of which heat rather than merely warm.  If you like the idea of heated seats (and steering wheels) be certain to try them out before you buy a given make/model of car – because all seat heaters are not created equal. Some barely rise to the tepid. The ES300’s are roasty toasty. 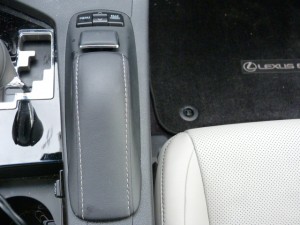 Also worth a mention is the ergonomically excellent mouse input controller. There’s a pad contoured to fit your right hand and wrist, with the toggle just ahead of that. You use the toggle to select what you want, then click  it. The toggle itself has just the right amount of drag – making it so you don’t overshoot what you want and accidentally click on something you don’t. 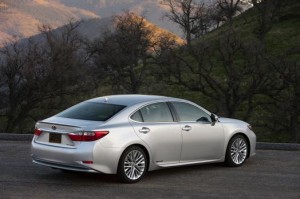 There are haters who for years have mocked the ES as a tarted-up Camry. Which it is. But it’s an exceptionally nice Camry. With the appeal of the Lexus brand – and the Lexus dealer experience. The haters can say what they like; Lexus sells these things hand over fist – and at full MSRP, too.

Here’s what I say:

The ES – either version – is one of the most comfortable, quiet, pleasant-to-drive cars on the market. It may not be as sporty looking or driving  as say a BMW 3 or Caddy CTS – but it’s much more comfortable than they are and – for everyday driving – apparently just sporty enough. 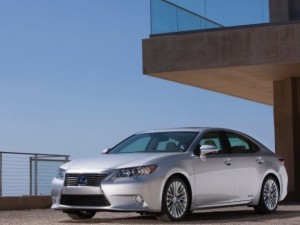 Styling-wise, the ’13 ES – again, both versions – has the new Lexus “face” that’s shared with other Lexus models like the new GS and also the top-of-the-line LS. It’s a kind of wasp-waisted, two-piece deal that pinches toward the middle, where a body-colored bar separates the upper and lower sections. Off to either side are narrow-slit headlights with the LED lower brows that are becoming a popular thing. The ES also shares the lower side bone line with its GS and LS siblings – as well as a very fast (sharply angled) fastback rear glass – with power sunshade, natch.

Some perspective: The BMW 3 Series Active hybrid (which starts at nearly $50k  and maxxes out at 33 MPG) gives you a meager 35.5 inches of rearseat legroom – almost five inches less! 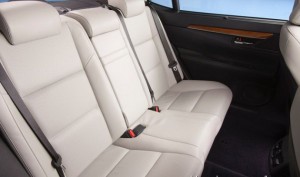 Another mid-sized luxury car, the Cadillac CTS, has only 36.6 inches of backseat legroom.

But, the comparo that matters most is vis-a-vis the new Lincoln MKZ.  Well? Just 37 inches of rearseat legroom – three full inches less than you get in the ES.

The MKZ does have very generous front seat legroom: 44.3 inches vs. 41.2 for the ES300. But unless you (the driver) are an NBA forward, you’ll need all of those 44.3 inches much less than your backseat riders will the ES300’s 40 inches of rearseat real estate. I’m 6ft 3 – and long legged. And I had to scoot the front seat forward a bit to get comfortable.  In my opinion, Lincoln made a mistake by tipping the balance of space, front to rear, too much toward the front – at the expense of the rear. 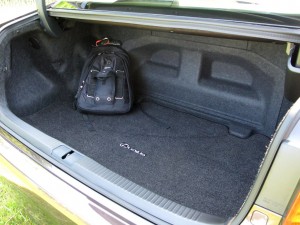 The ES also has a slightly larger trunk than the MKZ’s – 12.1 cubic feet vs. 11.6 cubic feet – although both are on the small side. These are hybrids; the battery pack has to go somewhere. And where it goes is where some of the trunk would otherwise be. The non-hybrid ES350 has a 15.2 cubic foot trunk. The non-hybrid MKZ, 15.4 cubic feet.

I averaged (according to the car’s onboard computer) 32.7 MPG in mixed-use driving during the week I had the car. That’s about 7 MPG off the EPA’s projected average (city and highway) number of 40 MPG.

To be fair to the car (and to Lexus) I must point out that I tend to drive faster the average bear. And also that my “mixed-use” driving is mostly open-road/steady high-speed, which is exactly the sort of driving hybrid’s aren’t optimized for. So, almost 33 MPG average given all that is pretty solid. I don’t doubt for a moment that, driven more reasonably – especially with more “city” driving thrown into the mix – the ES300’s numbers will meet or even exceed the EPA’s stated numbers. 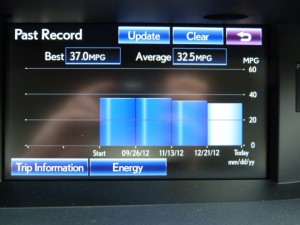 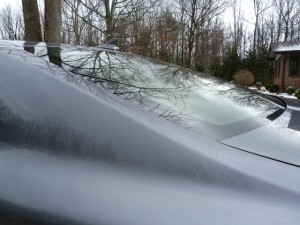 by going with the ES300 over the non-hybrid ES350. Especially if the price of gas jumps up during that time.

Lincoln, of course, had to price the MKZ aggressively because Lincoln ain’t Lexus – and a big part of the reason why people drop $35k-plus on a status car is because of the status of the car. Lexus is top-drawer, blue chip. Low depreciation – high re-sale value. Lincoln not so much. The MKZ is not a bad car – and Lincoln’s not a bad brand. But it’s not Lexus. 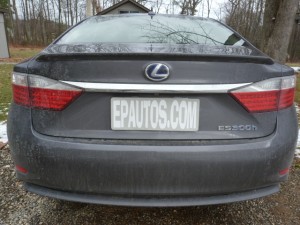 Also, the MKZ is a road toad. With two people inside, it will probably take closer to 9 seconds to get to 60. That could prove to be a bigger problem for Lincoln than rebuilding the status of the brand.

If you demand some Go with your Green, the ES300 has got you covered.