Hybrids are, without question, the future. 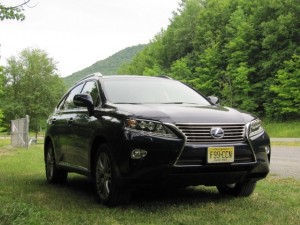 Not because they necessarily make the most sense from an economic – or even “green” – point of view. But because they’re a way for the car companies to continue building vehicles that they’d otherwise probably be unable to build – or which would be much less profitable for them to build – given the federal government’s draconian fuel-efficiency requirements (and attendant fines for not meeting them).

Nothing that’s not very small-engined – or (somehow) very fuel efficient – is going to satisfy the federal requirement that all new cars average 35.5 MPG by 2016.

Hybrid powertrains are fuel efficient. But, they’re also expensive. Which, when you think about it, is a study in contrasts. You pay less at the pump.

But you pay more for the vehicle.

In the end, you may end up paying more, overall.

But at least, hybrid powertrains will make it possible for the car companies to continue selling certain kinds of vehicles – including medium-large crossover SUVs like the Lexus RX, which might otherwise face government-mandated early retirement. 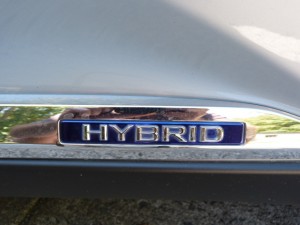 The RX is Lexus’ popular crossover SUV, one of the very first – and most successful such vehicles. The RX450h is the hybrid version of this big-selling crossover. Prices start at $45,910 for the FWD version and $47,310 for the AWD-equipped version.

Changes for 2013 include a redesigned front clip as well as a new Sport mode that changes several operating parameters – including steering effort (an advantage of electric-assist steering) as well as throttle response and transmission shifting characteristics. The formerly optional power rear liftgate is now standard equipment, too – and a USB port for hooking up external devices such as iPods is likewise included at no extra cost.

An absolute steal relative to a Porsche Cayenne hybrid ($69,000 to start) one of the few currently-available hybrid crossover SUVs sold by competitors – or a Benz ML350 BlueTec diesel ($50,490 to start) which isn’t nearly as fuel efficient – and also several thousand bucks more expensive to buy. 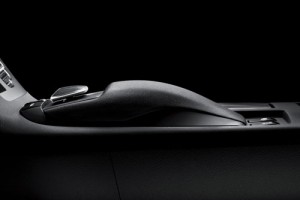 EPA says it’ll take about eight years to work off the price differential in fuel savings, assuming gas prices stay about the same.

Input controller may not be the hot ticket for left-handed people.

In the FWD model, there’s an electric motor to provide supplemental power during acceleration, plus a high-torque starter/generator to turn the gas engine off and on as you go and also to capture and convert the energy of the vehicle’s momentum back into electricity to feed the batteries and keep them charged up. AWD RXs have an additional motor to provide power to the rear wheels when low traction up front warrants it. 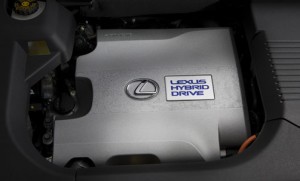 It also delivers almost CAFE-compliant fuel economy: 32 city, 28 highway for the FWD version. (The AWD version comes in just behind this with a 30 city, 28 highway score.) This is within spitting distance of the 35.5 MPG edict that goes into effect just three short model years from now – which amounts to just two short calendar years from now. All Lexus has to do between now and then is eke another 3-5 MPGs out of the thing and they’re ok. At least, until CAFE goes up to 54.5 MPG – but that’s still a few years off (2020).

The non-hybrid RX, though, is in trouble.

The FWD version only rates 18 city, 25 highway; with AWD this drops slightly to 18 city/24 highway. Both stats fall well short of the 35.5 MPG CAFE cut. That means the non-hybrid RX – and all models like it – are in the government’s gunsights. Lexus – and everyone else – will be faced with the Hobson’s choice of either continuing to build non-compliant (non-hybrid) vehicles – and pass the government fines onto consumers in the form of higher sticker prices. Or, they can build CAFE-compliant vehicles – and hope that people can still afford to buy these necessarily more expensive vehicles.

Either way, we’ll all be paying for “fuel efficient” vehicles in the near future. 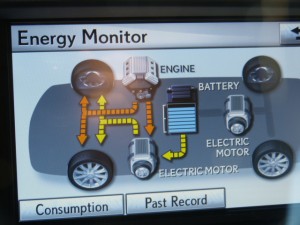 The hybrid RX drives beautifully. It is a masterpiece of engineering. The operation of the hybrid powertrain is subtle – and seamless. Once you’re moving, it’s hard to know when the gas engine has been turned off – or when the electric motors are working – unless you’re looking at the LCD display that shows you what’s doing what. The display graphically charts the flow of power from the engine – and to the batteries – and from the batteries to the electric motors. You can use this real-time display to modulate how you drive – maximizing the amount of driving you do using just the batteries and motors – in order to achieve the highest possible economy – minimizing the amount of driving you do using the power of the gas engine.

It is possible to drive the RX on electric-only at speeds up to 40 MPH or so – just like a Prius. And you can coast for awhile on just the electric side of the powertain at speeds as high as 70 MPH – or even faster. The gas engine cuts in whenever it’s needed and you won’t know unless you’re looking – or listening. At low speeds, with the windows rolled down, you’ll be dead silent – just like an electric car. Because when you’re running on just the batteries and motors, that’s exactly what you are – an electric vehicle.

But, here’s the surprise: This thing is also right quick! Especially when you slide the shift lever to the left and engage Sport mode, which sharpens up the shifting action of the CVT automatic transmission and throttle response curve. Mid sevens to 60 is quicker than a new FR-S sports car (and several others, too). Truth be told, the RX probably has more power than it needs – or rather, more power than most buyers will probably ever need. Lexus could have made it to the 2016 35.5 MPG CAFE cut with the current model just by dialing back the output of the big V-6 by 30 hp or so (or making the V-6 a bit less big, say 3.0 liters rather than 3.5). Most buyers would never have noticed the difference. This de-rating and down-scaling is inevitable, regardless. Might as well get used to it.

Handling is also surprisingly tight. The ride is still cush – but you don’t bounce when the road dips. Or (and this is the really impressive thing) lean when you throw it hard into a curve. This is pat-worthy – given the RX hybrid weighs a beefy 400 lbs. more than the standard RX (4,520 lbs. vs. 4,178 lbs.). Cinching down all that unsprung mass – 5,000 lbs. with two large adults on board – is no easy trick, but Lexus pulled it off.

There’s no driving downside to the RX hybrid.

The Cayenne diesel is arguably the better choice – efficiency-wise, at least. It rates 20 city and 28 highway – and starts out at a more reasonable (and RX competitive) $55,750. Its zero to 60 time of 7.4 seconds is dead-heat even with the RX, too. 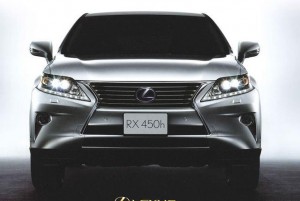 The side profile is pretty much the same as last year but Lexus has tweaked the beak – with the most obvious difference, ’12 vs. ’13, being the new-design grille. It has horizontal rather than vertical slats – as well as an hourglass shape, with a center bar in between the upper and lower sections. Headlamp assemblies have also been redesigned and include LED under-brows now. They’re slimmer and taper more, too. The end result is a slightly more aggressive face – but still very recognizably RX.

The hybrid RX gets a few unique exterior trim bits – including cobalt-blue background “hybrid” sill plates and “L” Lexus badges in the grille and on the rear liftgate. Inside, the hybrid RX also gets its own hybrid-specific gauge package. Instead of a tachometer to the left of the speedometer – as in the standard RX – the hybrid RX has dial gauge with three positions: Charge, ECO and Power. When you’re running electric (including regenerative braking, during deceleration) the needle will show Charge – in blue. Accelerate rapidly enough to kick the gas engine to life and you’ll be in the red – Power, on the dial. Eco is the transition in-between, as when coasting – or when the gas engine is operating intermittently.

Beyond the special gauge package, the hybrid RX is laid out exactly like the regular RX. 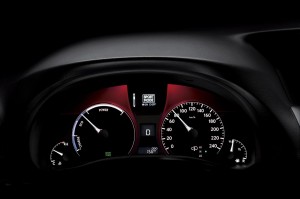 This includes the unique “hand mouse” on the console. It is shaped to fit the natural curve of the human hand. Your main digits operate the little toggle switch located toward the front of the unit, to highlight whatever function you’d like to access – such as satellite radio, or the GPs. Then use your thumb to select by depressing the pad on the left side of the controller. I’m a righty – and for me, the system was among the easiest of these high-tech input devices to use by feel – without having to look at what I was doing. This made the system much easier (and arguably, safer) to use while I was driving.

However – lefties may not like it at all. Some righties, too. It’s one of those things you’ve got to try out for yourself to know for sure – either way.

Space-wise, the RX has 80.3 total cubic feet of capacity with the second row folded down (power-folded, naturally). This is a good bit more than the Benz ML (71 cubic feet) and substantially more than the Porsche Cayenne hybrid (59.7 cubic feet). 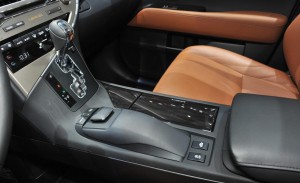 As far as trim/equipment: The RX hybrid comes loaded – the major options being bundled together in Premium, Navigation and Luxury Packages – the latter including individual LCD monitors for the second row occupants and a 15 speaker ultra-premium Mark Levinson audio system. You can order automatic parking assist, adaptive cruise control and heated/cooled front seats. Lexus also offers its Enform technology suite, which  gives you real-time stock market and weather updates as well as Lexus news updates.

But it’s not necessary to order all that stuff to have a very nicely equipped RX. 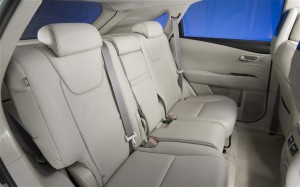 One RX weak point – relative to its sort-of (because so much more pricey) competition is tow capacity. The RX hybrid can only pull up to 3,500 lbs. – about what a typical mid-sized sedan can. The Porsche Cayenne hybrid,  on the other hand, can pull 7,716 lbs. – comparable to mid-sized, truck-based SUVs with V-8 engines. Ditto the diesel Benz, which can haul 7,200 lbs.

There is also the issue of long-haul durability. Lexus – that is, Toyota – has more experience with hybrids than any other automaker. And its hybrids have proved to be very durable and reliable. But the laws of physics cannot be negated – and eventually, every battery – or at least, every battery developed to date – becomes less and less efficient. That is, less and less able to store a charge. At some point down the line, the RX’s batteries will need to be “tuned up.” And there is also the issue of the – in effect – multiple engines in this thing. One gas engine, subject to all the wear and tear and maintenance issues you’d expect. Plus a set of electric motors on top of that. More stuff equals more stuff that may – and probably will – eventually need fixing. Or replacing.

The diesel Benz, on the other hand, is a diesel – and ought to be capable of going 300k-plus with decent treatment – and you’ve got no other engines (or motors) to worry about. Or batteries, either – other than the normal 12V deal that starts the car up, at least .

It’s food for thought – especially if you’re looking to drive whatever you buy for for the next 12-15 years or more. 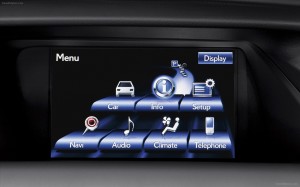 This is a very nice ride – and a pretty fuel-efficient ride. But it’s also a more expensive ride. And it’s the sort of ride we’ll all be taking soon, like it or not – courtesy of our “friends” in Washington.