The 2013 Chevy Malibu is the first “normal” car to come standard as a hybrid car. Two non-hybrid versions will be arriving later this summer, but for the moment, if you want a Malibu, you’re looking at a hybrid Malibu Eco. 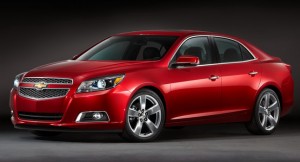 It’s an interesting strategy. But is it sound policy?

Like the Chevy Volt electric car, the Malibu Eco hybrid is a neat piece of engineering – and a nice car, too. But ultimately, its success or failure will depend on whether enough buyers think it’s worth the coin.

The Malibu is a mid-sized, FWD sedan that – for now – is sold only in hybrid Eco form. The Malibu Eco is a so-called “mild” hybrid, meaning the gas engine turns itself off when the car is stationary – and an electric motor/battery pack provides an assist when it is accelerating . But unlike full hybrids such as the Toyota Prius (or the new Camry hybrid) the Malibu Eco doesn’t have the ability to move down the road solely powered by electricity – and you can’t plug it in to recharge its batteries. 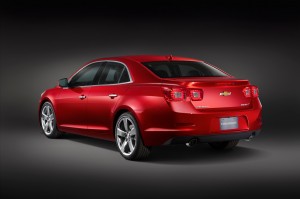 As summer rolls on, Chevy will add a lower cost base trim (non-hybrid) to the lineup as well as a sporty turbocharged version.

Competition includes the Hyundai Sonata, its cousin the Kia Optima, the Toyota Camry and the Ford Fusion.

Everything. The ’13 Malibu is all-new

Nicely finished, inside and out.

At the time of this review in late April, the Malibu was being sold only in mild hybrid form – “Eco” in Chevy-speak. A 2.4 liter engine with direct injection and variable valve timing is paired with a small electric motor and 15 kW lithium-ion battery pack for extra boost during acceleration and also to provide power for accessories when the car is stationary. 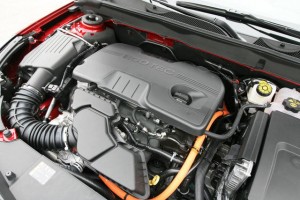 A six-speed automatic transmission with manual shift control function is the standard (and only) transmission in the Malibu Eco.

These are pretty solid numbers – except for one thing: Competitors’ numbers are even better.

The non-hybrid (and only $19,795 to start) Hyundai Sonata has 198 hp and still manages a very respectable 24 MPG city, 35 MPG highway – a virtual dead heat with the Malibu Eco. The Sonata’s sportier – and slightly less expensive (but functionally identical) Kia cousin, the $19,500 Optima likewise delivers the same nearly-hybrid fuel economy without the hybrid Malibu’s much higher sticker price. 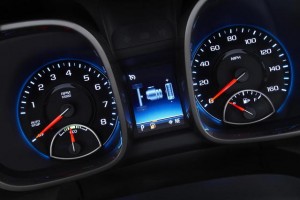 A third option you might want to look at is the $25,995 VW Passat diesel. It gets 31 city, 43 and costs only a few hundred bucks more than the Malibu Eco hybrid. I’d personally choose a diesel over a hybrid for the long-haul. Ten or fifteen years down the road, the diesel will probably still be delivering the goods. But over that span of time, a hybrid’s batteries will probably deteriorate in performance (ability to hold a charge), reducing the efficiency of the drivetrain and possibly requiring expensive replacement.

The Malibu Eco’s hybrid drivetrain is almost unnoticeable unless you happen to notice that the engine has turned itself off while you’re waiting at a red light – by visually glancing at the tachometer, not by ear. Or if you happen to be watching the power-delivery display on the LCD flat-screen monitor – which shows you what’s going on as it’s going on. The auto-start function is seamless . In some hybrids I’ve driven, you can hear and feel the gas engine re-start. The Malibu is more finessed and refined in this respect. 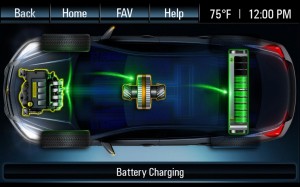 It also helps that the Malibu has a conventional six-speed automatic rather than a continuously variable (CVT) “one speed” automatic. There’s less engine/drivetrain noise when accelerating – although not using a CVT probably cost Chevy a couple of MPGs that the Malibu Eco really could use. The fuel economy benefit is why you’re noticing more CVTs in service – including in hybrids such as the Ford Fusion hybrid. (The Hyundai Sonata, on the other hand, uses a conventional automatic and still gets extremely good mileage; with a CVT, it’d probably do even better.)

Acceleration is neither weak nor strong – it’s very middle of the road. For what it is – and what most buyers probably expect – it is certainly sufficient. Like almost any new car, once you’re in top gear, you can trundle along for hours at 75-plus effortlessly, with the engine barely running 2,000 RPM. Getting to 90, 100 mph – and more – is deceptively easy. There’s no sign of strain until you’re well beyond ordinary speeding ticket territory.

The tragedy of our time is how effortlessly fast (and fairly fuel efficient when running fast) even “family” type cars like the Malibu are – and how illegal it is to make use of what they can do. Given the realities of the American road, a bit less can’t-really-do-much-with-it capability in exchange for better everyday mileage would probably be a good swap. 45 MPG and 100 MPH, all out vs. 37  MPH and probably 120-plus.

Handling is a high point – not because the Malibu Eco corners like a BMW but because the Malibu Eco doesn’t corner like most hybrids. It feels… normal. Not ass-heavy (or just heavy) as many hybrids do because, well, they are. Having several hundred pounds of batteries bolted to the floorpan is not unlike having several hundred pounds of bricks in the trunk. The typical hybrid car sways and lurches in the curves and when you brake, you feel all that weight trying to keep right on going. But Chevy has very effectively damped the Malibu’s suspension so that the extra weight doesn’t show itself like a beer belly in a T-shirt two sizes too small. The Eco even feels eager at a clip just above the legal – and it’s only when you’re well into the not-legal that it begins to get ruffled. But not unsettled. Just the normal body lean and lower grip threshold you’d expect to encounter in a family-type car being pushed harder than it was meant to be pushed. That’s all. The Malibu Eco hybrid feels more steady and confident than a non-hybrid Camry – the best ’87 Buick Regal Japan ever made – and a helluva lot more so than a hybrid Camry. It also handles with greater agility/confidence than the Sonata hybrid.

Driving-wise, it’s one of the best (if not the best) car in its class.

If it only it got better gas mileage. 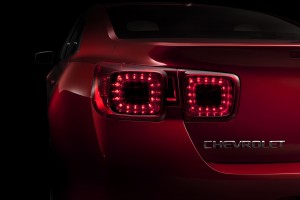 Chevy has been clumsy in the past as far as incorporating styling elements of its popular models into bread-and-butter models. A recent example of this being the cartoonishly over-large retro-round taillights grafted onto the tail end of the current FWD (and V-6) Impala to try to conjure up fond memories of the old RWD (and V-8) muscle car Impalas of the ’60s. It didn’t work because there was nothing in common between the two cars except the name. Square peg, round hole – or the reverse.

This is different. Chevy stylists took cues from the current Camaro and blended them into the Malibu; you’ll see the DNA manifesting in the shape of gauge cluster and tail-lights, the semi-fastback rear glass, the overall hunky squat of the car. It’s integrated – not a grafted-on afterthought.

No fault to find with the car’s lines – or its insides. The cabin of the Eco I tested was everything the PR sheet said it would be – “premium,” in car-biz lingo. Individually fitted panels (including the “toupee” over the gauge pod) covered in convincingly soft-touch leatherette material, with equally believable stitching buttoning it all up.. The chrome bits have a rich, deep, almost liquid look; the wood inserts aren’t obvious plastic. That plus features and equipment the previous Malibu lacked – such as GPS and music streaming via the Internet – amount to a Great Leap Forward over the previous Malibu, which was a competent enough car but far from “premium.” 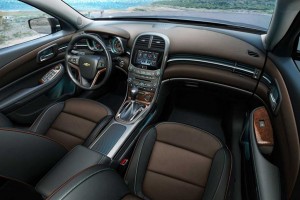 It’s also really quiet – Chevy says the quietest car it has ever made. I believe this, too.

One deficit relative to some of the competition is interior space. The Malibu’s got 39 inches of front seat headroom and 42.1 inches of front seat legroom. This is not cramped – it’s actually about the same as you’d get in the Ford Fusion (38.7 inches and 42.3 inches, respectively) and a bit more than you’d get in a Camry (38.8 inches and 41.6 inches).

But it’s noticeably less spacious than the Hyundai Sonata’s almost full-sized car accommodations: 40 inches of headroom and 45.5 inches of front seat legroom – that’s 3.4 inches more than in the Chevy. 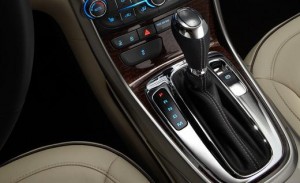 There’s nothing objectionable about this car – other than the slightly awkward-to-use controller for changing gears manually, which is mounted on top of the shifter. To go up or down you have to move your thumb forward and back, pushing down to engage the + or the -. It’s not very ergonomic. I’m also not a huge fan of the electrically-actuated parking brake my test car came equipped with. Sure, it’s a neat gadget and it does free up space on the console that might otherwise be taken up by a manual pull-up parking brake. But, two things: That electric actuator will probably cost a small fortune to fix when it fails. And eventually, it will fail. I’d rather have a simple, functional, manual-control cable. Also, note my use of the term, parking brake. What you don’t have is an emergency brake. If a car has a pull-lever brake on the console, and there’s a failure of the main braking system, you can use the emergency brake to slow the car down in a controlled manner. This is not possible with the electric parking brake, which cannot be modulated. It’s either on – or off. Even if the system let you engage the parking brake while the car is moving (which it probably won’t) the result be immediate wheel-lock and an uncontrolled skid. Not good.

So, give me the manual pull-up emergency brake every time.

But, small potatoes. Overall, this is a really nice car. Premium look, feel and function.

I like this car – it’s a good car – I’m just not sure whether I can recommend this car given what you can get, MPG-wise and otherwise, at a Hyundai, Kia or Toyota dealer for the same or less money. Chevy needs to figure out a way to get either the city or the highway MPGs into the 40s in order for the Eco to be competitive with what’s on the market right now. And also what’s on deck. Ford has an updated 2013 Fusion coming in a few months – and it’s sure to deliver even better mileage than the 2012 version. Which is going to make things that much rougher on the Chevy.

It will also be interesting to find out is whether the soon-to-be-here non-hybrid Malibu will be comparably quick – and comparably fuel-efficient – for less money than the $25,235 Malibu Eco. 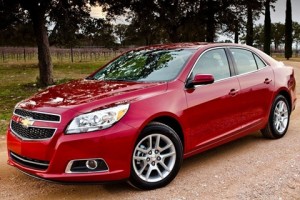 The Mafia is Disappointed . . . in Millennials!