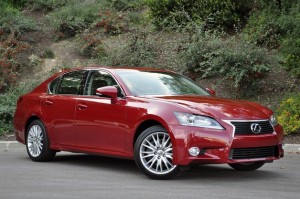 Or at least, not like they used to exist.

Can you think of any?

The Lincoln Town Car and Cadillac DTS were the last of the line… you know – well-padded sedans not built to go fast or corner – nor look like they could, either.

Old school luxury cars like the Town Car and DTS  – RIP – have been superseded by luxury-sport sedans that are built to go fast and corner – and look like they can, too.

The much-changed 2013 Lexus GS is an object lesson in these shifting tastes and priorities. It’s been muscled-up, both cosmetically and functionally,  in not-so-tacit recognition of the fact that today’s (mostly younger) luxury-sport buyers don’t want what yesterday’s luxury car buyers wanted.

The question for today is: Has the new GS got enough sport for these luxury-sport buyers? 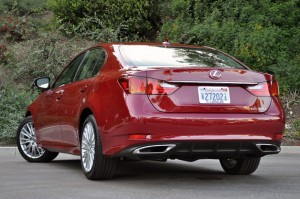 A hybrid version of the GS is also available; it will be reviewed separately.

The 2013 GS has been heavily updated for the new model year.

About $4k less to start than comparably powerful/performing Benz E-Class and Audi A6 3.0T.

Much more engaging to drive fast – and hard – than previous GS. 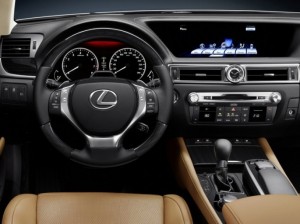 Most ergonomic mouse-input controller in the business.

V-8 option is off the menu.

Traction control is presumptively nannyish; seat heaters could use some more BTUs.

The ’13 GS – all versions – comes standard with a 3.5 liter V-6, same size as last year but with the output increased slightly to 306 hp from 303 hp previously. Also increased slightly is the gas mileage – which now stands at 19 city, 28 highway for the RWD model vs. 19 city, 26 highway previously. The slightly heavier AWD-equipped 2013 GS350 is now as fuel-efficient as last year’s RWD GS350 – posting the same 19 city, 26 highway stats as the old model.

Part of the reason for the improved output – and mileage – is a new, more efficient direct gas injection system. The other part of the reason is the multi-mode six-speed automatic transmission – which in addition to the predictable Sport, Normal and Snow settings also includes an ECO mode to eke out a few extra MPGs when you’re not feeling the need for speed. 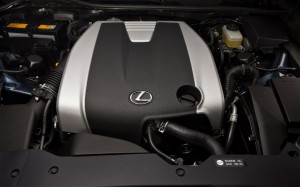 You decide which setting you’d like by rotating a knob on the center console – left for ECO (dash glows blue) right for Sport (dash glows red). Normal is the default setting. Push the rotary knob down to engage. There’s a smaller button for Snow mode behind the main controller knob.

In ECO, it’s the opposite: the transmission changes its shift parameters to maximize fuel economy. It tries to get you into top gear as soon as it can, to cut down the revs – to cut down the fuel usage.

Normal mode is in between. 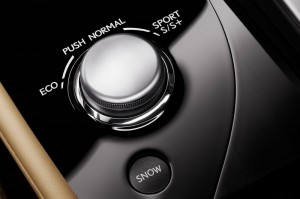 Like several other automakers, Lexus appears to be shying away from V-8s – not because of lack of interest in the marketplace, but because of too much interest from Uncle Sam. The federal government has issued a fuel economy Fatwa that by 2016 – three short model years hence – all passenger cars will average (!) 35.6 MPG.

The “or else” being fat fines – which the automaker will either pay or cause its customers to pay, in the form of higher sticker prices. Too fat a gas guzzler tax and a car becomes economically untenable. Hence direct gas injection (and turbo fours, as in the case of the BMW 528i and Audi A6 2.0 T).

Hence the disappearing V-8, too.

Increasingly, they’re available only in very high-priced cars where an extra grand or three in gas guzzler taxes folded into the MSRP is less noticeable (the V-8 version of the BMW 5, for example, starts at $62,000. The V-8 Hyundai Genesis is an anomaly, price-wise; get one while you can – before the Feds get to it).

But in mid-priced cars like the GS350, the price-padding prospect of a couple or three grand in gas guzzler fees becomes a competitive disadvantage. So, they get retired in favor of amped-up (but more fuel-efficient) V-6s and (as in the BMW 528i) even turbo’d fours. 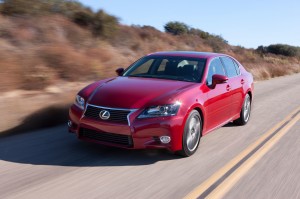 The immediately noticeable functional difference, last year vs. this year, is handling and ride – as opposed to straight-line punch.

The ’13 feels a little quicker – probably because of the much sportier shifting characteristics of the new six-speed transmission and also because of the surprisingly deep bellow the V-6 engine offers up at WOT – but isn’t really.

The zero to 60 times, previous model vs. this new model, are a virtual dead heat.

But Lexus has tuned the ’13 GS to be a noticeably firmer-riding – and much more confidently cornering – machine. This you will pick up on right away – especially if you drive the old model and the new one back to back. There’s less high-speed lean and weight transfer; the car holds a line much better – and can be driven much faster before it reaches the “better back off now” threshold. The gear-holding (and throttle-blipping) six-speed automatic is now your friend in the apexes. Like other “smart” automatics, it has a learning algorithm that monitors your driving; the more aggressive your driving, the more aggressive its shift characteristics. There are manual F-1 style paddle shifters if you like to play – but it’s by no means needed to keep the car in the right gear for whatever situation. A huge improvement – performance-wise – over the previous GS.

To emphasize the GS 350’s new gym bod, there’s an available F Sport package ($5,690). It includes a high-performance 19 inch wheel/tire package (staggered sizes, with larger meats out back), a more aggressively programmed version of the adaptive suspension, which cinches the car down even tighter when it’s running fast – plus upgraded brakes, faster steering and exterior/interior cosmetic enhancements. 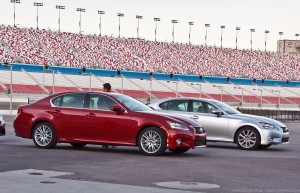 These upgrades have made the GS much more competitive as a luxury-sport sedan with models like the standard-bearing BMW 5. And arguably, superior to it – at least when you factor in what’s under the hood for the money. The $46,900 GS350 has 60 more hp than the four-cylinder-powered (240 hp) and also $46,900 BMW 528i. That extra 60 hp means faster corner exits –  and almost a full second quicker, zero to 60.

The new GS is also a lot more lively than the current Benz  E350 – which has about the same hp (302 hp) but is set up more like the old GS, in terms of being more of a cruiser than a bruiser.

In my opinion, the greatest threat to all the Name Brand luxury-sport sedans in this segment is the almost-unbelievable Hyundai Genesis. The V-6 version is at least as strong as the base-engined versions of all these models for much less money – and considerably stronger than several, including the four-cylinder versions of the Audi A6 and BMW 5. And the Hyundai’s optional 429 hp V-8 dominates them all on a price-anywhere-near equivalent basis. The V-8 powered BMW 5 (the 550i) and the V-8 powered Benz E (the E550) cost some $20,000 more than the V-8 Genesis – and still come up some 20 hp shy of what the Hyundai delivers.

Benz and BMW are probably praying that CAFE kills the Genesis V-8! 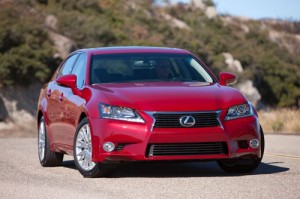 Americans are, uh, bigger than they used to be – and one of the obvious downsides of a sporty car, if you’re not-so-sporty yourself,  is it’s also usually a tighter-fitting car.

Styling-wise, the ’13 has edges where the old model had curves. The front clip, especially. It has an angular chin with inward-canted grille openings that might have been inspired by the menacing mug of a Cylon centurion from Battlestar Galactica. No insult intended – it looks mean. Which is probably the look Lexus intended. Dual “wind sweeps” shoot backward over the hood from either side of the big Lexus badge – accentuating the car’s speedy nature. But as a Lexus ought to be, the overall package is still pretty low-profile. It does not call  as much attention to itself as something along the lines of a Jaguar XF – or even the Infiniti G – which is a quality Lexus buyers seem to desire. 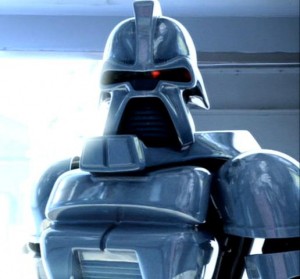 The Lexus mouse controller is – in my opinion, having tried them all – the best in the business. The design is brilliantly ergonomic. There’s a padded palm rest on the console, with the mouse right at your fingertips. Up or down, left or right – then push to select what you want. There’s just enough drag to give you precise control of the pointer, even when the car is moving.

Ease of use is further improved by the oversized (and recessed, to cut down on sun glare) LCD display for the GPS and infotainment.

Normally, I am not a big fan of this kind of equipment – because using it often takes way from the act of driving the car. Not in this case, though. For once, the technology helps you operate the car’s system’s more effectively – less awkwardly – which means you’re more able to effectively drive the car.

A lengthy suit of high-tech options is also available – everything from a heads-up display (HUD) to military-style infrared night vision to automatic self-parking. There is also Lexus’ Enform concierge technology, which works with and through your Smartphone.

It may no longer have a V-8, but that doesn’t mean the GS can’t hustle. All the cars in this class are silly fast – no matter what’s under the hood. Too silly fast, arguably, for the cop-saturated, low-performance, least-common-denominator driving environment out there. I’ve ranted about this depressing reality before – but it’s worth ranting about again. Because it’s almost an exercise in self-abuse to buy a car this capable – then not be permitted to use that capability. Or rather, to cause severe consequences to rain down upon you if you dare to use that capability more often than once in a blue moon.

Even making full use of the GS’s power to blast away from a light and to the next one down the road risks the Tazer-backed wrath of the polizei – and then the DMV. And after them, your insurance co. What use is 150 MPH top speed capability in this land of not-so-much liberty? It’s nice to have, I guess. Like a full-auto AK-47. But what can you really do with it? 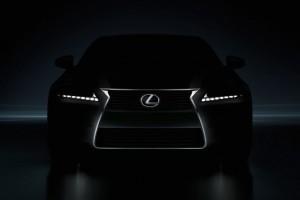 Every once in awhile, an opportunity presents itself: You are on a merge lane, entering a highway. The traffic coming up is coming up fast. But with 306 hp on tap, slotting in is no problemo. This is gratifying. You just have to remember to back off as soon as you do slot in – or as sure as taxes and death, some cop will be there to make your day.

The V-6, as mentioned above, certainly approximates the performance of the previously optional V-8. The main downside – for Lexus – is that a V-6 doesn’t quite have the snob appeal that a V-8’s got. And in this class of cars that can easily cost $50k – that’s no small issue. Especially when there are V-6 powered, non-luxury priced sport sedans that match the power/performance – for $20k less. Or luxury-sport sedans like the spectacular Infiniti G37 that offer more power/performance – for $10k less.

And of course, there’s the Hyundai Genesis… .

The GS350’s traction/stability control is pretty peremptorily nannyish. You’re not allowed to turn it off while you’re moving. Or rather, it will turn itself back on as soon as the car reaches about 30 MPH – whether you want it on or not. 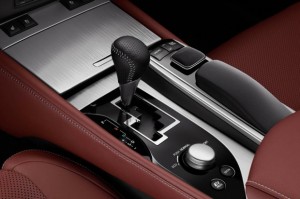 To turn the traction/stability control off – and keep it off – you have to stop the car first.

This is – ostensibly – a driver-minded car. So the driver’s mind – not a computer nanny’s mind – ought to be in charge of the TCS.

Also, the seat heaters are a bit weak. They’re more like warmers than heaters. They also cycle off rather quickly, so you have to keep turning them back on to keep the warmth coming.

But all things considered – small stuff indeed. The overall car is very appealing.

Thank Washington for that.