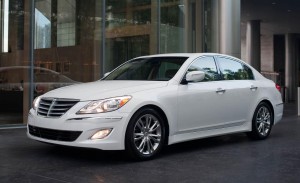 But the regular Genesis may be the real star – and the pick of the proverbial litter in its class. Because it’s a better luxury car than anything in its price range – and when equipped with the R Spec’s 429 hp 5.0 liter V-8 (but without the R Spec’s more aggressive suspension tuning and for just over $45k) it is also the best luxury-performance bargain going.

The Genesis is a mid-sized, RWD luxury-performance sedan, available with either a 3.8 liter V-6 engine or one of two available V-8s.

The Genesis runs in the same crowd as the BMW 5 Series, Mercedes E-Class, Lexus GS series and Infiniti M. 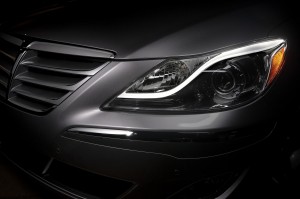 The regular (non R Spec) Genesis can now be ordered with the same engine that powers the high-performance R Spec. So, you can get the R’s power/acceleration without the R’s firmer-riding, high-performance-minded suspension.

Full-boogie mid-sized luxury for the price of entry-luxury.

Non-fussy controls; no third arm (and eye) needed to change the radio station while driving.

Hasn’t got the snob status of a BMW or Benz – or Lexus.

But give it time. 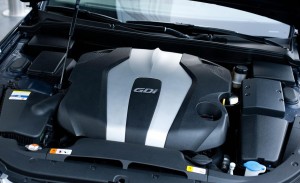 The Genesis comes standard with a 333 hp 3.8 liter V-6 (significantly more power than the standard engines in the much more expensive BMW 5-Series and Mercedes E-Class) and an eight-speed automatic transmission (which only a few cars at any price currently have) driving the rear wheels.

And that’s before you upgrade. 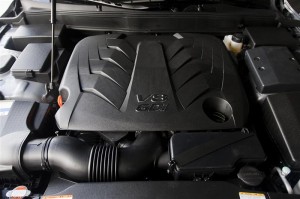 Pay not much more – that is, pay about the same as the others charge for the base six (or four-cylinder) powered versions of their cars – around $44k, and you can command a V-8 Genesis with 385 hp. But the real payoff comes when you lay another grand on the table. $1,000 more (chump change at this level) will get you the R Spec’s 429 hp V-8 and 5 seconds to 60 MPH.

It’s the deal of the decade.

Oh, and BMW charges extra for an eight-speed transmission.

But at least you’ll have money left over to pay for all that gas. 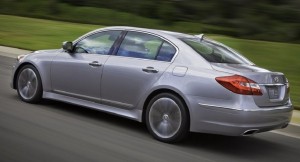 The Genesis stands out in another way, besides being a fantastic value. It is more like luxury cars once were – as opposed to the luxury-sport cars that are now the rule today.

It has a very mellow, almost Lincoln Town Car ride. The seats are more like old school lounge benches than the bolstered sport buckets common in competitors. There is no “Sport” mode for the eight-speed automatic (though you can manually toggle through the gears, if you want to). In Drive, it shifts seamlessly, quietly, unnoticeably. The gas pedal is like the speed control for an electric motor (without the whirring). The car will rush forward if you need it to, but there’s no accompanying roar of exhaust and intake, no tire-chirping, rev-matched gear changes at redline. It just builds speed very rapidly, without drama. It is not unlike the experience (which was a good experience) of driving a brand-new Sedan deVille circa 1974. Or the aforesaid Town Car. A real highway car. Only with twice the power under the hood, so you hardly ever need to call up the reserves.

It is an interesting gamble Hyundai’s taking – because the driving dynamics of the Genesis are a counterpoint to the current fashionable trend of everyone pretending they’re about to run the Nurburgring with gloves on, all out. Which of course, they’re not – except in their fantasies and in the TV commercials. The Genesis is the far superior road machine, if the road is 1,000 miles of Interstate. Rack it up to 75 or 80, engage the cruise control (which not only maintains following distances, it knows when the road turns curvy and slows accordingly) and motor on. You will be there before you know it – and your ass won’t show it. Or rather, feel it. The Genesis is an incredibly comfortable and easygoing car – which is what luxury cars used to be all about but aren’t anymore. 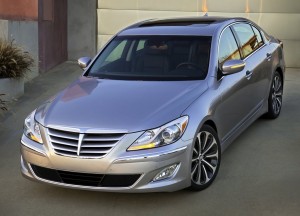 The Genesis is also subdued in its aesthetics. It lacks the threatening angularity of a BMW or Benz. It is instead a great big handsome lug of a car – a stately car. Again, very much in keeping with the old school lux-barge aesthetic now largely forgotten.

It is a car that looks substantial and elegant but without calling too much attention to itself. This makes it less sweaty to drive in not-so-great neighborhoods – or leave parked on the street. 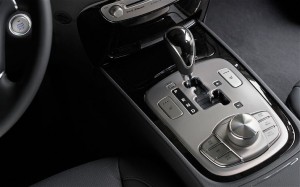 Inside, it’s similar. You’ll find the given things – stitched leather panel inserts, each laid carefully into position, soft wood accents, chrome and so on. What’s uncommon is the ergonomically efficient layout of gauges and controls. You will not find the car equivalent of an iPhone – countless tiny buttons that do god-knows-what. There is a central mouse input on the console, but the main controls for things such as the AC and heat, fan speed and so on are refreshingly simple buttons on the center stack. And the mouse input is a quick study; actually, it requires no study – unlike some of the competition. 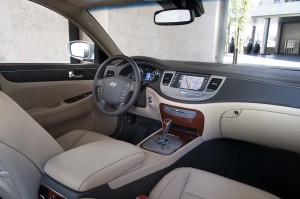 The BMW has just 14 cubic feet.

You can get a wagon body over at the competition (some of them) and also AWD. Personally, I think the value of AWD has been over-sold. It adds one more thing to break (or which needs service), costs you gas as you drive and costs you money up front in the form of a higher MSRP. Will it help you in the snow? Maybe. Except that most AWD-equipped luxury-sport sedans are equipped with sport tires – and also ride so low to the ground that they ride up on top of packed snow – which means they are just as helpless and stuck as a RWD car – only you paid more for the privilege. 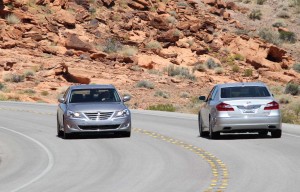 If you are sold on AWD, be sure to get at least all-season tires to go with it, if you want to get anywhere when it snows.

The wagon thing is more objective. Given the small trunks typical of mid-sized cars (see above) it’s handy to be able to crutch that by choosing a wagon body – if you need decent cargo space, anyhow. Hyundai might give thought to expanding the lineup this way.

Related – Hyundai may need to think about expanding its brand – bifurcating from just Hyundai to Hyundai plus a separate/more exclusive Hyundai luxury-car division. Because Hyundai, though respectable, is not unlike Toyota – more bread-and-butter than caviar and champagne. Toyota created Lexus for just this reason. Hyundai will probably need to do the same thing, in order to establish itself perceptually (as well as objectively) as being a brand on the same level as a BMW or Benz.

If you’re not worried about Snob Appeal – and are looking for luxury more than luxury-sport – the Genesis is without peer. Its affordability is almost incidental – the icing on the cake.