You can’t fight city hall, the saying goes – and it’s true. You’re at their mercy – and are forced to play by their rules. When you get a traffic ticket, for instance, you have to pretend to agree with the premise (i.e, that the law you were charged with violating is fundamentally legitimate) but you should be let off because of some extenuating factor, such as poor signage or your speedometer wasn’t reading accurately.  Your honor, I didn’t mean to speed… . It’s degrading to have to play out this pantomime but there’s not much choice because resistance – overt resistance – is futile.

However, evasion is still possible. And it can make you glad.

There is a stop sign at the terminus of a T intersection I know very well because every day I run that stop sign. Well, sort of. As I approach the T, I look left – you can see down the road a good half mile – and if no one’s coming, I make my right turn without coming to a complete stop beforehand, as required by “the law.” There’s no good reason to come to a complete stop – other than it being “the law.” And I do my best to evade and ignore “the law” when “the law” conflicts with reasonableness and common sense – and because I chafe at obeying anything “just because.” There is no reason to come to a complete stop; you lose momentum and that wastes gas – no small thing these days. If one can see that there’s no opposing traffic, why stop? 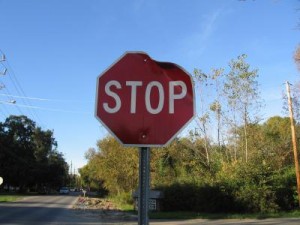 There is a traffic light at a certain intersection. If you sit at this intersection waiting for the green light to make a left turn you will wait a very long time. The bureaucrats who time this signal have it set so that it does not give the drivers waiting to go left a green light for 5 minutes, from one cycle to the next. And it often skips cycles – so that opposing traffic gets the green but you don’t. If you obey “the law,” you may be sitting there for as long as 10 minutes – staring at the empty road in either direction, servilely obeying a light.

I routinely run this light – because I find the prospect of just sitting there for 5-10 minutes for absolutely no reason (other than “the law”) to be idiotic. My time – and the $4 per gallon gas in my tank – are valuable to me. Much more valuable than obeisance to “the law.” So, if my V1 radar detector (also against “the law”) and my eyes tell me there’s no cops and no traffic and it’s safe to proceed, I will proceed.

And boy does it feel good!

Not just the “getting away with it,” either. (Though that is enough all by itself. Each time you “get away with it,” you amortize the costs of the times you didn’t. So, for example, if I “speed” every day and get away with it, the occasional ticket I get works out to mere pennies per offense.)

But there is also the empowering satisfaction that comes of exercising one’s own judgment – and of exercising initiative – as opposed to the doughy, filmy-eyed passivity that “the law” demands.

Too bad so many Americans have forgotten what it feels like. 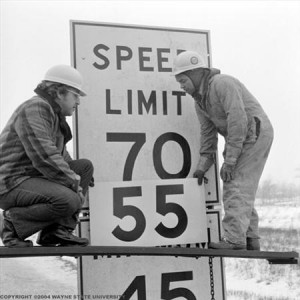 And I think that is precisely the point. “The law” wants doughy, filmy-eyed passivity. It persecutes the exercise of judgment – even when there’s no denying the objective rightness of the judgment exercised. For example, if a cop witnessed me “running the light” (or “failing to come to a complete stop” at that stop sign) a ticket – and fat fine – would be coming my way, irrespective of the fact that no harm was caused or even theoretically possible. My pointing out that no opposing traffic was around – that I’d looked first and proceeded with due caution – would cut no ice even if he knew all that to be true (having witnessed it himself). The only thing that matters is “the law.”

Which is why trampling such laws underfoot whenever possible is so important – in addition to being satisfying. It is – well, was – part of the American Way.

Those over a certain age will recall the National 55 MPH speed limit, in force for about 20 long years – from about 1974 to 1995. To their credit, most Americans thumbed their nose at this “law” whenever they could get away with it. It was a stupid law – an evil law, because it criminalized reasonable driving and became the pretext for stealing – yes, that’s the right word – millions of dollars annually from drivers in the form of “speeding” tickets and the subsequent ratcheting upward of their insurance premiums on the basis of these tickets. It was outrageous and contemptible – and for once, the American people stood up to it. By not paying attention to it. By ignoring “the law” – and driving at reasonable, safe speeds (speeds that are now also legal speeds once more, it’s worth pointing out). 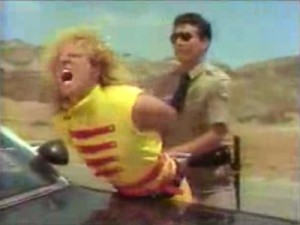 Why shouldn’t the same go for other mule-headed laws such as the ones demanding full stops at stop signs in the middle of nowhere, when it’s clear there’s no reason (other than it being “the law”) to come to a complete stop?  Why should we sit like cattle at lights that never change (or which take forever to change) when there’s no reason (other than it being against “the law”) to look, then proceed?

If enough of us began to treat with similar contempt the other laws – the many laws – that plague us but which are just as silly as “Drive 55” (or Prohibition) we could shame and ridicule these laws into the history books. The stumbling block is overcoming the passivity and submissiveness that is now the American archetype. We didn’t use to be this way – and we don’t have to be this way forever. You say you’re sick of the suffocating, controlling New World Order that’s congealing all around you? Defy it! Not with bullets – but with initiative and common sense.  And ridicule. These tools are still available to us. Check Coles Specials and Big W Catalogue.

If only enough of us were willing to pick them up… .

There Won’t Be 24/7 Coverage of This “Racist” Outburst