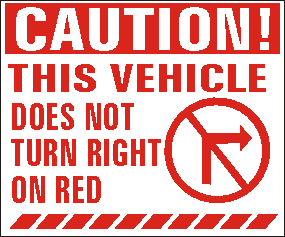 If the way is obviously clear in both directions, if it’s obviously safe to enter the intersection, make your turn and proceed. . . why not proceed?

Because of The Law.

It is (usually) illegal to make a left turn on red. Sometimes, a right turn, too.

But why is it illegal?

Because The Law assumes a very low standard of competence – and applies it generally.  If you think about it, this least common denominatorism is another form of collectivism. The individual – his merits, his skill, his initiative and judgment – all irrelevant. You can literally be Dale Earnhardt, Jr. (or Danica Patrick), a superbly skilled and scrupulously conscientious driver whose actions were impeccably safe  – and still you will receive a ticket – and all that goes with it, including the smear of “unsafe driving” – if you are caught ignoring a red light – ignoring The Law – and using your own eyes and skill and judgment instead. You are expected – required – to sit like one of Pavlov’s dogs, not merely awaiting the green signal but (and this is key) paying no attention whatsoever to the flow of traffic in the lanes you are hoping to cross. You are not encouraged to monitor the situation, to use your own eyes to see whether traffic’s coming.

What’s wanted are three things: Docility, passivity – and (most of all) obedience.

These are the true underlying principles of American traffic law – not “safety.” If this were were not the case, then good drivers who for good reason ignore pointless traffic signals – the classic example being an endless red light at an obviously empty intersection where it’s clear to all there’s no other traffic around for miles – would not have to fret the possibility that, while no traffic is present, there might be a cop hiding in the bushes, patiently waiting for some not-fully-conditioned individual to use his senses and exercise judgment rather than demonstrate blind obedience to The Law.

When this individual goes to court, the question at issue will never be whether his actions were safe. Whether it was reasonable to ignore the traffic signal and proceed. The accused could literally provide a video of the entire incident that clearly showed no danger to anyone; that he exercised the appropriate caution before proceeding, that at no time was he in any way putting himself or any other motorist in danger. None of that matters. Only The Law – and mindless, literally mindless, unquestioning obedience matters.

In fact, the worst possible sin (in the eyes of the system) one can commit these days is to use one’s mind – to question, and to act accordingly, based on reasoned judgment.

This subtle conditioning has had a widespread soporific effect. A dulling of the American spirit.  One sees the results not just on the road, but everywhere. People – most people – just do as they are told. They almost never ask why anymore.

Even fewer act based on their thinking.

They just … shuffle along in a kind of stupor.

It is why driving has become such a depressing – and aggravating – experience. People are no longer expected to pay attention to anything except The Law.  Not to conditions, not to the traffic around (or behind) them. Just … wait… for … the light.

And more subtly: Do as you are Told.

This reflects the mindset of modern America – and an American people that is much more like the Weimar-era German (or Soviet) people than it would probably like to believe. A people that is reflexively deferential to authority (examples: TSA groping/scanning; random “checkpoints” – etc.) that not only does not question but gets its back up at those few who do question.

Or worse, who disobey.

Consider what the typical American would probably say in response to this column: Why, he is encouraging people to break The Law! Does he want to legalize drunk driving, too?

And yet, it was once (a long time ago) precisely the opposite quality that defined Americans. They were individuals – and they questioned. Our culture and society once upon a time encouraged them to question, too. If something did not make sense, it was ignored – and even ridiculed. People who thumbed their noses at stupid, tyrannical laws – and those enforcing them- were admired.

Today, you are expected to Submit and Obey, regardless. It is The Law.

But unlike Orwell’s 1984, the populace is not kept in check by overt force. Instead, as in Huxley’s Brave New World, the populace has been infantilized and is kept perpetually distracted by idiot games and gadgets. There is also soma for those who think too much in the form of various “anti-depressants” and so forth. In the book, non-conformists and freethinkers were exiled to an island – isolated spots around the world where they were – finally – left in peace to do as they wished.

That may be the best we can hope for – those of us who for whatever reason haven’t been effectively conditioned to automatically Submit and Obey, who dare to think – and act accordingly.

I suppose it’s better than the lethal chamber reference by Huxley’s World Controller, Mustapha Mond – and much more so than Orwell’s Room 101.

Rand Paul Gets The Grope