If you like the current Ford Fusion, now’s the time to get serious about snapping one up. Because an all-new Fusion is on deck for model year 2013 – which will be introduced before calendar year 2012 is over. 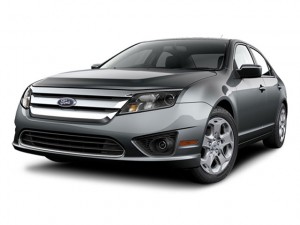 There’s more to consider than just the higher sticker price of the soon-to-be-here 2013s. Dealers will want to deal on the remaining stock of ’12s. But the ’13s will command top dollar – until the newness wears off, at least.

But money isn’t everything, of course. The relevant question is simply this: Is the current car worth the coin?

The Fusion is Ford’s “bread and butter” mid-sized sedan, similar to – and a competitor of – models like the Hyundai Sonata, Chevy Malibu and, of course, the Toyota Camry and Honda Accord.

There is also a hybrid version of the Fusion, which will be reviewed separately. It starts at $28,775.

Very little, as this is the final year of the current Fusion before the “all new” 2013 version comes down the tunnel not too many weeks from now. Here’s a sneak pic: 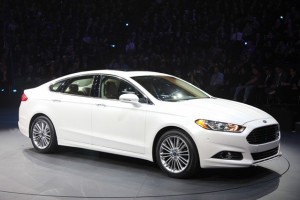 Still looks current, feels current. No obvious “sell by” stink to it.

More sporty-feeling than Camry or Malibu.

Available AWD (not available in Sonata, Malibu, Camry or Accord). Not as slick as Sonata – or nice as the new Malibu.

V-6/AWD versions are gas hogs – as bad as 17 city – which is why the V-6s are being retired after this year.

Hyundai Sonata costs $1,000 less to start – and comes with a much stronger standard engine that also gets slightly better gas mileage.

Only base S models with base four cylinder engine are offered with a manual transmission; all other trims come only with a six-speed automatic transmission. 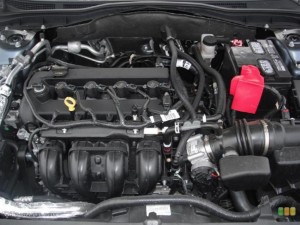 The current Fusion is available with three engines, starting with an economy-minded 2.5 liter four rated at 175 hp. It’s a bit behind the pack leaders both power-wise, performance-wise and efficiency-wise – but not by all that much. It delivers an EPA-rated 22 city, 32 highway (with the manual transmission; with the automatic, the numbers go up slightly to 23 city and 33 highway). This isn’t quite as good as the class-leading Hyundai Sonata, which comes standard with a 198 hp engine that rates 24 city, 35 highway – but it’s only 2-3 MPG off the pace.

On the other hand, other competitors cost more – and don’t really give you that much more. For example, the Toyota Camry. The standard engine makes 178 hp – only 3 more than the Fusion’s – and returns 25 city, 35 highway. Again, only slightly better economy than the Fusion. The Toyota get to 60 in about 8.1-8.2 seconds – quicker, but not all that much quicker, than the Ford.

But the Camry’s starting price of $22,055 is $1,300 higher. It’d probably take at least four or five years of driving to amortize the Camry’s higher sticker price in down-the-road fuel savings at 2-3 MPG a tankful. 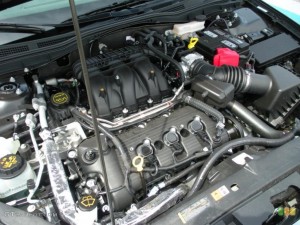 The Fusion’s base engine is the only Fusion engine that’s available with either a six-speed manual transmission or an optional six-speed automatic. As noted above, the six-speed automatic is more efficient. However, it’s an extra-cost option (eating away at the nominal fuel savings) and – subjectively – the manual’s more enjoyable to drive (more on that below).

Now for the optional engines – a pair of sixes.

The first, a 3.0 liter six, ups the ante to 240 hp – and gets the Fusion to 60 in a much speedier 7.3 seconds. The downside is sub-par fuel efficiency – not just relative to the four-cylinder but relative to competitors’ optional (and often better-performing) engines. With FWD, the 3.0 engine returns 20 city, 28 highway; with AWD, this dips – and not a little bit – to 17 city, 24 highway.

For some perspective as to how bad this is, last week I tested the new Subaru Impreza. Even with AWD, this car is capable of 36 on the highway and 27 in city driving.

Now, to be fair, the AWD Soobie has a much smaller (2.0 liter) four-cylinder engine – and is much slower than the V-6 Fusion. 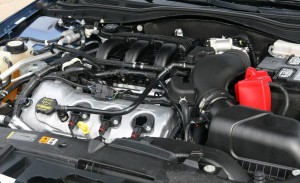 The Ford’s ace in the hole is that it’s the only car in its class that offers a powerful V-6 and AWD. In fact, none of its direct competitors offer AWD at all.

But the gas mileage thing has sealed the fate of both the 3.0 and 3.5 liter engines. Next year’s Fusion will be a four-cylinder-only Fusion. Like the Hyundai Sonata, there will be a base, non-turbo four (the current engine will carry over). Optionally, there will be a new 2.0 liter EcoBoost engine, in the range of 237 hp – about the same as the current 3.0 liter V-6 – but capable of 30-plus MPG on the highway. There will also apparently be a high-economy 1.6 liter version of the Ecoboost engine capable of almost 40 MPG on the highway.

The Fusion is a nice-driving car, and a sportier-driving car than several competitors – in particular, the Toyota Camry and Chevy Malibu – which are both tuned more for sedate A to B driving and so get unhappy when driven from A to B at a not-sedate pace.

In terms of road feel and response – the way it tracks and deals with lateral forces in cornering – it’s most like the Sonata and the Accord: Minimal body lean, pretty much goes where you point it without having to constantly re-point it, etc.

The base four may be a bit underpowered relative to newer rivals like the hot-shoe Sonata – but if you get it with the manual transmission, it’s still peppy enough to make the drive enjoyable. Equipped with the top-of-the-line 3.5 liter V-6, the Fusion is only slightly less quick than the V-6 versions of the Camry – and the turbocharged Sonata.

Ford could have enhanced the sportiness of the current Fusion by offering a six-speed manual with either V-6 instead of only with the base four-cylinder engine. Maybe the 2013s will be different – no firm word yet, though, as to whether the new Ecotec fours will be available with a manual transmission.

The chief difference you’ll notice on the road between the 2012 Fusion and its rivals is fuel economy.

If you buy an AWD Fusion with the 3 liter engine and drive it enthusiastically, you can expect your gas mileage to average high teens. The bigger V-6 does about the same, so it’s worth choosing it over the 3.0 liter engine given you get 23 more hp and a more class-competitive 0-60 time without incurring a fuel economy penalty.

Still, it’s lucky for Ford that summer gas prices have unexpectedly ticked down. 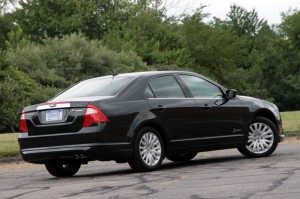 The conservatively styled ’12 Fusion will look a bit dowdy in a few months when the Aston-Martin emulating 2013 Fusion arrives. But it’s debatable whether middle-of-the-road family car buyers want flash – and the higher price that usually comes with it. From the pictures I’ve seen of the 2013 Fusion, it seems to be a near-Lexus or almost-Audi. What’s known inside the biz as an “aspirational” model. Ford is very definitely upmarketing the Fusion – which is fine if the market can support that – and wants that.

But I keep hearing a little voice in my head that whispers… remember the Phaeton…. .

Now, the 2013 Fusion is not going to cost $80,000. But – as mentioned previously – it apparently will crest $30,000 – the first time a Fusion has entered what amounts to entry-luxury pricing territory. It will inevitably face stack-ups against prestige-branded cars such as the Infiniti G, Lexus ES350 and BMW 3 sedans – all of which start out not all that much higher. The question: Will buyers pay almost-BMW or Lexus money for a Ford? – will be answered a few months from now, I guess. 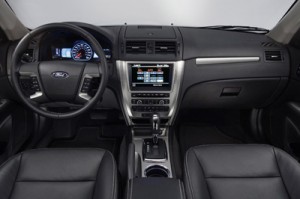 This is one of those situations that’s both an opportunity and a potential pratfall. The opportunity is obvious: Here’s your chance to buy a perfectly nice 2012 Fusion at probably a much better price than you’d pay for a more trendy (because “newer”) Sonata or Camry. Certainly you’ll pay less for a 2012 Fusion than you can expect to pay for the pending 2013 redesign.

On the other hand, while the 2013 is going to cost more up front, the prospective down-the-road savings via the expected 8-10 MPG improvement in fuel efficiency could rapidly make up for the higher initial purchase price. If by next summer gas prices are back up to $4 a gallon – and you’ve got a 17 MPG 2012 Fusion – you may be kicking yourself each time you fill up.

So, it’s something of a gamble. There’s the sure bet of saving money right now – potentially several thousand dollars, if you haggle yourself a sweet deal –  against the gamble that you may end up paying more for fuel sometime down the road. 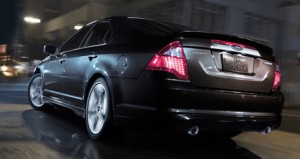 As Clint Eastwood once put it, do you feel lucky?