This new CX-5 ought to do pretty well. 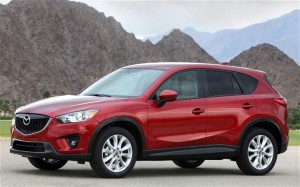 Though it’s technically a compact crossover SUV – it looks (and actually is) almost mid-sized. So it’s substantial and roomy.

Two, it starts at just over $20k – vs. over $22k for its most obvious rivals, the popular Honda CR-V, Toyota RAV4 and Ford Escape.

Last item: 26 city, 35 highway – best in class – and exceptional for a crossover SUV. 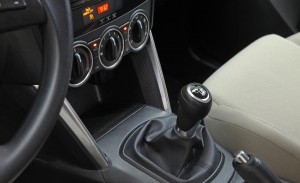 The CX-5 is a new (for Mazda) sporty crossover SUV – with seating for 4-5 in two rows. It is the replacement for the current CX-7, which will be retired after the 2012 model year runs its course.

A top-of-the-line Gran Touring CX-5 with AWD and six speed automatic lists for $28,295. 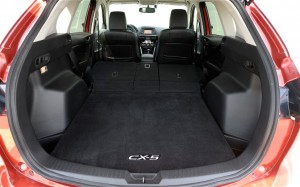 Manual transmission only available with base Sport trim – and not with AWD.

No optional engine (the retiring CX-7 offered a 244 hp turbo) for those who might want more Zoom Zoom.

The ’13 CX-5 is powered by a version of the new “SkyActiv-G” 2.0 liter four that made its debut last year (well, technically still this calendar year) in the 2012 Mazda3. This engine achieves very high fuel efficiency via direct gas injection, a very high (for a gas engine) compression ratio of 13:1 and special design lightweight pistons and crankshaft, among other internal upgrades. The high compression design delivers two desirable things – better fuel economy and 10-15 percent more low and mid-range torque, relative to a similar engine without such a high CR.

In the past, it was not feasible to build gas engines for normal street driving with such high compression ratios, because of the possibility of engine-killing pre-ignition (that knocking/gurgling sound) caused by not high-enough octane gas, or too much heat build-up, or ignition timing that was too far advanced for the fuel/ load placed on the engine – and so on.

But alloy engines dissipate heat much more effectively – and modern engine controls can deal with knock (by dialing back ignition timing, automatically) before it becomes a threat to engine life. SkyActive takes it a step or three further by specifically designing the engine around the high-compression layout. It not only doesn’t knock – it runs on regular 87 octane unleaded gas. 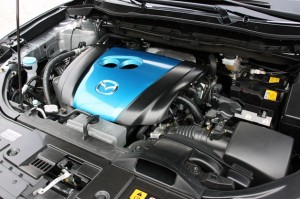 High octane premium is not required.

Note that Mazda was able to beat the Ford’s best-case fuel economy without resorting to a smaller engine – or a turbo.

And what about those other measures of performance – hp and acceleration?

But, out on the dragstrip, all three are packed together in the low-mid nines, 0-60. The FWD CX-5 gets there in about 9.3 seconds – a virtual dead heat with the FWD CR-V, which takes about 9.4 seconds. 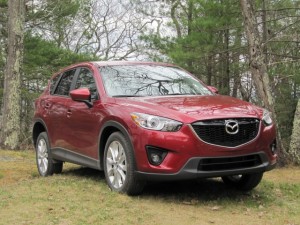 Probably, the Mazda makes up for its lower hp with more favorable gearing – it comes standard with a closer-ratio six-speed manual vs. the Honda’s standard five-speed automatic.

The Ford – just redone, incidentally –  is a stronger challenger. Chiefly because it offers an optional 2.0 liter turbocharged version of the Ecoboost engine that makes 240 hp. Gas mileage is still competitive, too: 22 city, 30 highway. You also get a six-speed transmission with the Escape – although no manual six-speed.

Another potential competitor – the Toyota RAV4 – is scheduled for a complete overhaul for 2013. So we’ll have to wait and see on that one. The current (2012) model does offer a very powerful 3.5 liter, 269 hp V-6, whereas the Mazda has no optional engine to upgrade to. 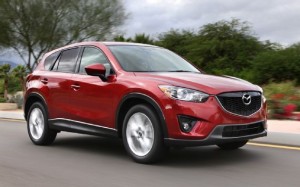 High horsepower is not essential to having a good time behind the wheel. Mazda seems to know – and practice – this philosophy more than most. The Miata, of course, being the obvious example. But the same genetic characteristics manifest when you’re behind the wheel of the CX-5, too – especially when your right hand is on the shifter for the six-speed manual transmission.

As good as modern automatics are – they shift with precision, efficiency and (usually) verve – it’s just not as fun as rowing your own. And probably never will be. On this score alone, the CX-5 has an appeal its competitors don’t – because none of them – at the time of this review at least – even offer a manual transmission.

With a small, not-so-powerful engine especially, a manual adds immeasurably to the sheer fun of driving. Banging off a perfect upshift – right on the sweet spot, revs matched to your footwork – is enthusiast driver catnip no automatic can deliver.

The only catch is the CX-5’s six-speed manual is offered only in the base Sport model with FWD. If you want one of the higher trims – or AWD – you get the six-speed automatic. However, it’s a pretty good box, too – with rev-matching downshifts and (Mazda claims) quicker gear changes than even dual-clutch automated manual transmissions. 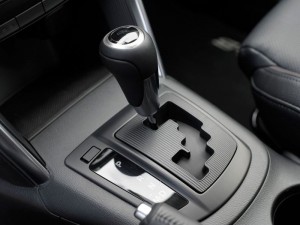 I drove the manual version, so I can’t confirm – or deny. But I can tell you the manual-equipped CX-5 is both pleasant to drive (easy clutch, with hill-holder feature, nice gear spread well-matched to the engine’s power curve) and more fun to drive than solid but stodgy crossovers like the CR-V and RAV4.

I haven’t yet driven the new (2013) Escape, so if you’re shopping vehicles in this class, be sure to do that. It also looks good, at least on paper – especially the 2.0 liter version.

Several people commented on the CX-5’s looks – specifically, commenting that it looked like a “$25k car” – or more. When I told them the base price was just over $20k, they were all surprised – and, impressed. You can get into a six-speed CX-5 – well-equipped, with AC, 17 inch alloy wheels, the power equipment most people want (locks, windows, cruise plus remote/keyless entry and ignition) for about $1,800 or so less than the base price of the CR-V or the RAV-4 or the Ford Escape.

Interior space – head and legroom – in both rows – is roughly the same as in the CR-V and 2013 Escape. All these technically “compact” crossovers are effectively mid-sized and can comfortably carry four good-sized adults, five in a pinch. 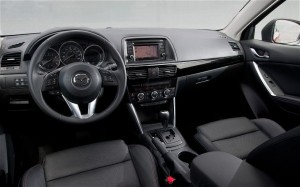 The biggest difference between the Mazda and the others is reflected in the styling – and the driving. The Mazda’s much more sport wagon-like than crossover SUV-esque.

Surprisingly, the CX-5 sits considerably higher off the pavement than some of its competitors: 8.5 inches vs.  6.3 for the CR-V and 7.9 for the Escape. But the voluptuous, undulating sheetmetal – including Coke bottle scalloping along the sides punctuated by subtly flared out fenders and a very bold-looking front end with a huge grille opening give the Mazda a rarin’ to go sportwagon squat. Ditto on the inside, which is typically Mazda – meaning, typically sport-minded. Serious grays and pewters with piano black trim plates for accent. Orange-red back lighting for the gauges and secondary controls.

Ready to get down to business. 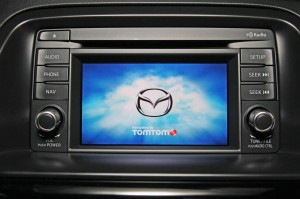 An interesting option is the GPS unit. It’s a TomTom, but it’s in-dash, integrated with the car and not removable. The upside is it looks factory (because it is) and so less susceptible to being stolen. Probably, the TomTom will be easier (and cheaper) to update, too. The downside is this unit, like other factory in-dash navigation systems, stays with the car. I’m a big fan of the removable/portable TomToms, which can be used in multiple cars – or taken with you when you’re on foot. But of course they’re not as seamless looking as a factory in-dash unit.

I know I would.

This one’s hard to fault – and so, hard not to like.

Go see one yourself – and see what I mean.