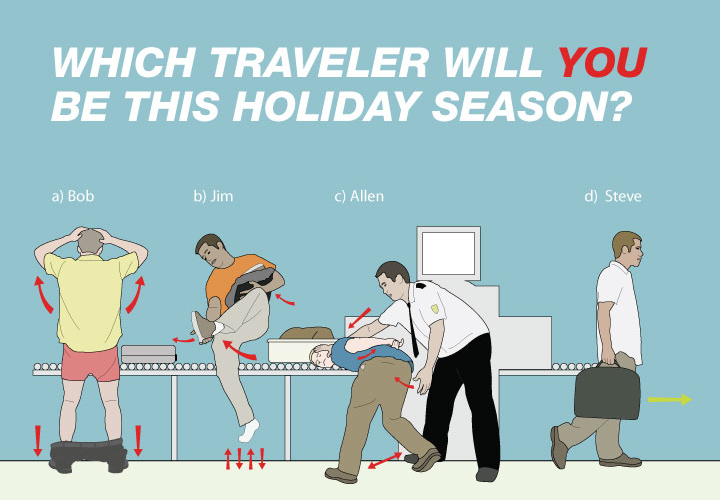 I just got invited by Mazda to attend a press event for the 2013 CX-5 in CA. I used to attend such events regularly, and I’d love to attend this one- but am pretty much decided against because of the prospect of being handled by some TSA cretin (because I won’t be scanned). I feel obliged to stand on principle, but there’s also the practical reason that I know myself – and know I might mouth off or maybe even hit one of those sons-of-bitches. And I don’t want to end up in jail (or worse). I’m still trying to practice avoidance. I know someday this will probably no longer be possible. But for now, I am trying to stay out of harm’s way – even though I know harm is not looking to stay out of my way.

This is the dilemma of living in America, post 911.

If it can be called living.

It is no longer possible to travel by air without submitting to degradations unimaginable just 10 years ago. All of us are faced with the horrid choice: Either we constrict our lives as a form of quiet protest against those who are trying to degrade us  – no more travel by air, which in addition to everything else also means not being able to see friends/family who live more than a few hundred miles distant without an arduous journey by car. Or we bow our heads (and spread our legs) and become complicit in establishing the new normal – and acceptance of those who degrade us.

They’ve got us cornered – again.

As has been noted by others, “the enemies of freedom” are right here – not in Iraq, or Afghanistan or Iran. Saddam Hussein did not take away my Fourth and Fifth Amendment rights. George W. Bush did. Achgezundheit (or however he spells his name) has never said he may target me for murder at his whim. The president of the United States has.

We think we have freedom (well, some of us do) because we’re still allowed to wear a green T-shirt vs. a red one (for now) or buy a Chevy rather than a Ford. But even here, our choices are narrowly defined by the government – which won’t allow just anybody to make a T-shirt or build a car. One must have permission (licenses) and submit to close and endless monitoring, as well as abide by a very long and detailed rule book (regulations).

Freedom my ass. You can’t even get firecrackers anymore in most states.

But now, tyranny is out of the closet. Its infringements are no longer subtle. Yet most Americans are still asleep – or so medicated and conditioned that they’re no longer capable of seeing.

How much worse does it have to get?

Will it literally take a bayonet shove in the back as they are directed to the trucks that will take them to the camps? I think it will.

We marvel at the passivity of (most) Jews in WWII Germany. The way hundreds – even thousands – of people accepted the barking orders of a handful of guards telling them to disrobe and then, in orderly groups, line themselves up for shooting (or gassing).

They do what they are told. They Submit and they Obey. Even now, when the price of resisting  is minimal. They could walk away from the airports – and the worst that would happen is they’d have to drive to get where they needed to be. Or maybe postpone that trip. They could decide it’s not worth the indignity – the challenge to their status as free men, as human beings  – to attend the Stupor Bowl if it means being scanned and groped. Imagine an empty (or even half-empty) stadium this weekend – and what a devastating protest that would be.

Imagine people putting their cars in Park, turning off the engine and turning on their flashers – and just sitting there at East German style “safety” checkpoints. Masses of them. Passively refusing to participate. Forcing the system to confront itself – or at least, making it plain what the system has become. And what it is going to be – very soon.

Instead, most Americans will gape at the Stupor Bowl, adjusting themselves after their groping. They will continue to fly – doing whatever is required of them first. They will “Yes, Sir” the flak jacket-wearing thug who arrests them for no reason at all, merely because they happen to be on a given road at a given moment in time. (And yes, a “random stop” is an arrest, by definition. You are detained by threat of force. The duration of the detainment – 5 minutes or five years – does not change the essential nature of the thing.)

And so they will go peaceably and quietly into that good night, too – when the consequences for resisting involve much more than an inconvenience for standing on principle.

That hollow-eyed man kneeling in front of the ditch, looking at us from the pages of long-ago? He is in fact our own reflection in the mirror.

It is a lesson we will have to learn again.

He Ain’t Hurtin’ No One…