Hyundai Motors is the target of a lawsuit – possibly, a class action lawsuit – because one of its customers can’t read. 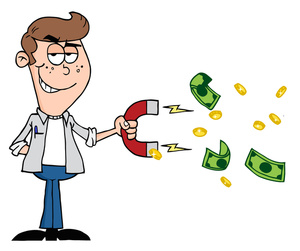 Louis Bird of Sacramento, CA bought a 2011 Elantra chiefly, he says, because of the advertised “40 MPG” claimed by Hyundai (and the EPA, which does the actual testing). Of course, as anyone who can read knows, that “40 MPG” touted by Hyundai (and EPA) is the car’s highway mileage. Most cars (except for hybrid cars) typically get their best mileage at steady-state cruising speeds, in top gear, on the highway – because it takes less effort to keep a car moving once it’s moving than it does to get it moving.

A car’s city mileage is usually lower, because it takes more energy to get a car moving from a standstill – which happens a lot in stop and go city-type traffic. So automakers – not just Hyundai, either – tend to emphasize the highway figure in their advertisements. However, they don’t hide the city number. More on that in a moment, though.

Bird says he was misled into believing that his ’11 Elantra would get 40 MPG – average. Not just on the highway. His suit claims that “TV advertisements for the ‘40 Mile Per Gallon Hyundai Elantra’ reflected only highway mileage, not city or combined highway/city mileage.” He thus claims he had no idea that his Elantra’s real-world average miles-per-gallon would end up being considerably less than 40 MPG. (Here’s a news story about this mess.)

But this is hard to believe, for one obvious reason: That hard-to-miss piece sheet of paper that’s glued – by law – to the window of every new car prior to sale. You know – we all know – the one with bold-faced type in large font that says – in the case of the Elantra – 29 city, 40 highway? 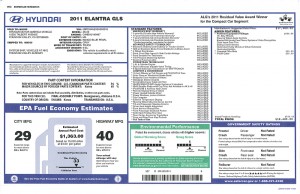 How could Bird have possibly missed this? Or is it simply that he cannot read? And either way, how is this Hyundai’s fault?

One would assume Bird didn’t just buy the car without any prior knowledge, just because he saw a commercial and glommed on to “40 MPG.” Surely, he read up on the car – its features and capabilities – at least a little bit. After all, it’s not a Snickers bar. It’s $18k or so on the table – at interest, for the next five years. Most people would give it a few minutes of thought first… .

And again, even if it were the case that he bought the car without taking any time to look into it, based solely on an ad that referenced the car’s 40 MPG capability on the highway – and perhaps, mentioned that fact in small print or even not at all – there’s that big fat window sticker – called the Monroney – named after Senator Mike Monroney – which cannot legally be removed prior to sale except by the final purchaser of the car – for the very specific reason that consumers are to be provided with certain facts about said car, prior to purchase, so that they can make an informed decision about whether to buy the car.

Every new car sold in the U.S. since 1958 has had to have the Monroney label in place – so one assumes the ’11 Elantra purchased by Bird had one, too. That means either Bird didn’t read it, or chose not read it – or could not read it.

Again, one struggles to understand how any of these options involves cupidity – or culpability – on Hyundai’s part.

It’s also hard to believe that anyone who didn’t go down with the Titanic doesn’t know that whatever the MPG claims made by an automaker – or the EPA – your mileage will vary. 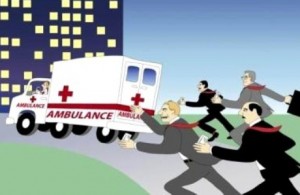 That, too, is right there on the Monroney, incidentally. Literally. They tell you, in plain English: “Your actual mileage will vary.”

So, what gives? Is Bird claiming the Elantra he bought did not have a Monroney? Nope. Is he claiming a Hyundai salesman erased the “city” number? Or replaced 29 with 40? Or told him the car would average 40 MPG? Nope, nothing like that. The lawsuit comes down to: Hyundai – supposedly – emphasized the 40 MPG highway figure while de-emphasizing the 29 MPG city figure.

Does that amount to misrepresentation – let alone fraud – given the abundance of information about the car’s actual mileage parameters, posted literally right in front of Bird’s face when he was looking at the car on the dealer’s lot? If it does, then it’s open season, baby.

Think of all the 4×4 SUV commercials that show heroic feats of off-roading. The shots of high-performance sports cars drifting, tail out, through an apex. The absence of people with pot bellies or cellulite – everyone beautiful, young, sexy.

What if I miss – or can’t read – the small print caveats about closed course, professional driver, do not attempt.  What if I am still old, bald and fat after I buy that Porsche? If I can’t duplicate the image on TV, is the automaker is misleading me and guilty of fraud?

Bird may be illiterate – or just a guy looking to cash in.

Not so much him, by the way. Rather, the courts which let him in.