“Fusion” – the process or result of joining two or more things together to form a single entity. 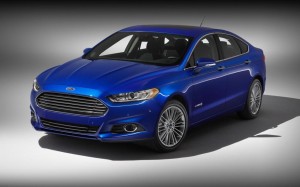 It’s a fair description – of the car.

Technically, the Ford Fusion is mid-sized, but it’s larger than several others in its class and its interior is as roomy in many respects as a full-sized car’s.

Though marketed as a family car, it’s got an Aston-Martin looking silhouette and – when equipped with its optional 2 liter turbo engine – gets to 60 about as quickly as my late-70s V-8 muscle car did when it was new.

But unlike my late’70s V-8 muscle car, the Fusion is capable of up to 37 MPG. So it’s also economical.

And affordable. Just over $21k to start – about $24k well-equipped. 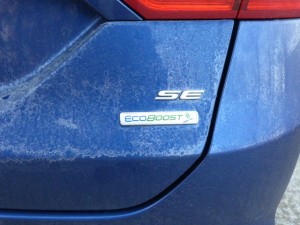 Hybrid drivetrain, if you want that – with a plug-in version on the way.

Lots of possibilities – in one car.

The Fusion is Ford’s bread-and-butter mid-sized sedan, comparable in size/layout/price to a Honda Accord or Chevy Malibu, but also sporty – like the Kia Optima. 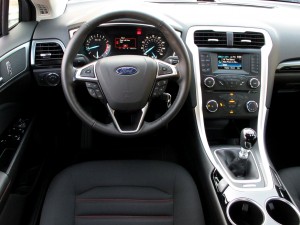 The 2013 Fusion is all-new. In addition to the updated body and interior, there have been major changes to the layout and drivetrain. The new car’s wheelbase is much longer – 112.2 inches vs. 107.4 inches previously – and the formerly optional 3.0 and 3.5 liter V-6 engines are gone, their place taken by a more efficient turbo four.

Power/performance are down somewhat, but the upside is superior gas mileage across the board.

Bigger outside – roomier inside. 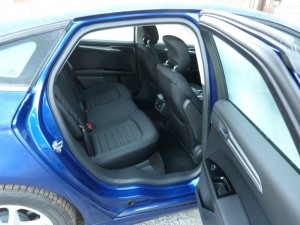 Higher prices across the board – much higher prices for top-trim (and AWD equipped) Fusions. 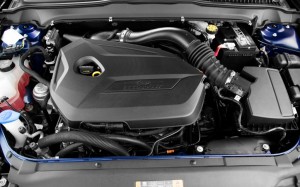 One obvious way the Fusion stands apart from its competitors is the multiplicity of available drivetrain choices. There are three engines, two transmissions and two possible drive layouts (FWD or AWD).

The base Fusion S and next-up Fusion SE come standard with a 2.5 liter, 175 hp engine – a carryover from last year. Gas mileage is, however, slightly better (and slightly worse) than before: 22 city, 34 highway vs. 23 city, 33 highway previously.

In SE Fusions, you can opt for either of two optional engines – both turbocharged. The 1.6 liter turbo engine is designed to provide on-demand power comparable to or even better than the base 2.5 engine, but significantly better gas mileage by dint of being almost 1 full liter smaller and thus, using less fuel during normal, low-load driving. It also uses auto-start-stop (engine automatically turns itself off when you come to a stop, then restarts itself just as automatically when you push down on the gas pedal) to squeeze as much distance as possible out of every gallon of gas. 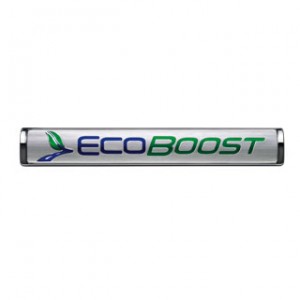 When paired with the six-speed manual transmission the 1.6 liter engine is capable of 25 MPG in city driving and 37 MPG on the highway. With the optional six-speed automatic, which has a standard D mode as well as an S Sport mode – this drops slightly to 23 city, 36 highway.

This gas mileage advantage is, however, somewhat negated by the $795 extra you’ll pay to get the 1.6 liter engine vs. the standard 2.5 liter engine.

Probably the pick of the litter is the 2.0 turbo engine – optional in SEs and standard in top-of-the-line Titanium Fusions. It makes 240 hp – and though this is 23 hp less than last year’s top-of-the-line 3.5 liter V-6 (263 hp) performance is near dead-heat. Depending on whether you go FWD or AWD, the car will get to 60 in about 6.8-6.9 seconds.

However, there’s a big difference, fuel efficiency-wise: The new car with the turbo four and FWD registers 22 city, 33 highway – vs. an unacceptably piggy (given current realities) 17 city, 24 highway for the ’12 Fusion with 3.5 V-6. 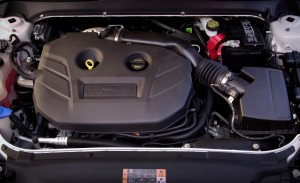 On the other hand, the Optima’s FWD-only. As is the Honda Accord. And the Nissan Altima. Ditto the Chevy Malibu – and the VW Passat.

The availability of AWD continues to be a Fusion selling point in a segment where FWD is the rule – and AWD the exception.

Subaru’s Legacy does come with AWD – standard – and with a base price of just $20,295 (much less than the cost of an AWD-equipped Fusion). However, the Subaru, though a nice car and a good value, is also slightly smaller and less roomy than the Fusion and – with its standard 2.5 liter engine – is slow (0-60 in 9.4 seconds) and with its optional 3.6 liter engine, thirsty (18/25). 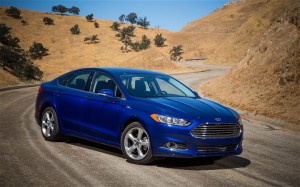 I test-drove a Fusion with the 1.6 liter turbo engine – which, like other members of the new crop of small-displacement, economy-minded, power-on-demand turbo engines, gives little indication it is turbocharged. And that’s exactly what’s intended. The 1.6 responds very much like a naturally aspirated (not-turbocharged) 2 liter-ish four cylinder engine in terms of thrust delivered and how it’s delivered. It’s not fierce – or sudden – thrust. Just sufficient thrust – consistently provided. When you give it gas, the car moves. There’s no momentary pause or stutter before the turbo boost comes on. No flat spots down low. No turbo whistle, either. Much less a boost gauge.

Probably the only way you’ll ever know there is a turbo under the hood is if it craps out on you eight or ten years from now – and that would be my chief worry with this engine or any similar engine from any other manufacturer. I am sure Ford has done extensive durability testing and the 1.6 (and 2.0) engine have been designed to go for probably 200k-plus without such problems cropping up. But the real world is not the same as manufacturer test-loops and durability trials. Only time will tell. Same goes for the auto start-stop feature that can ordered with the 1.6 engine to maximize the fuel efficiency potential. Stopping/restarting the engine perhaps a dozen times in the course of every morning’s drive may for the next eight, ten or twelve years may – or may not – have long term durability/cost implications, both for the automatic start-stop system itself as well as for the engine. (When it’s off, there’s no oil pressure; repeated start-stop cycles may result in more rapid wear and tear). Again, we won’t really know until these systems have been out in the real world for 8-10 years of normal street driving.

My main issue with the 1.6 engine, though, is that it’s about $800 extra. Yes, it’s more economical to operate than the standard 2.5 liter (non turbo) engine, but not by all that much: 25 city/37 highway (w/manual transmission) vs. 22 city, 34 highway.  That roughly 3 MPG advantage certainly matters as far as the government’s pending CAFE edicts – especially the 1.6 engine’s highway number, which meets and beats the 35.5 MPG CAFE requirement. But is it worth $800 extra to the buyer?

On the  other hand, there’s no denying the merits of the new 2.0 turbo engine. It maintains the performance level established (and so, expected) by the old 3.5 liter V-6 while heroically reducing the cost of partaking of that performance. There is almost a 10 MPG difference between the old 3.5 V-6 and the new 2.0 turbo. And that is definitely worth it, however you measure it.

My only gripe is you can’t get a manual transmission with the 2.0 engine – which Ford should consider offering, I think, given the sporty nature of this car.

Seats are superb – and sightlines forward and back are good. But like all new cars I’ve driven lately, visibility to the side is somewhat impaired by thick B pillars (there to meet the new federal roof crush mandates). The ride quality is quiet and cush. The new Fusion feels very much like a full-sized car.

Which it almost is. 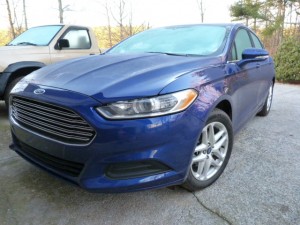 Back in the ’90s, Ford bought up controlling interests in premium marques such as Jaguar, Land Rover and Aston Martin. These brands were subsequently sold off, but clear evidence of the influence can be seen in current Ford vehicles such as the new Fusion – which looks more than a little like an Aston Martin. At least, when viewed head-on. The grille shape and overall themes are strikingly similar – and well-executed. It’s not cheesy in the way certain early Kias (as an example) tried to look like Bentleys, kinda sorta.

It’s bigger inside, too. 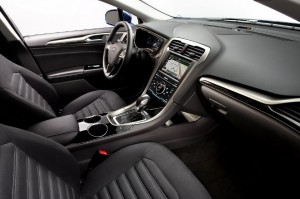 The only car in its class that offers more front seat legroom is the Kia Optima – with an incredible 45.5 inches. However, the Optima’s back seats are really tight: 34.7 inches of legroom, 3.6 inches less than in the Fusion. 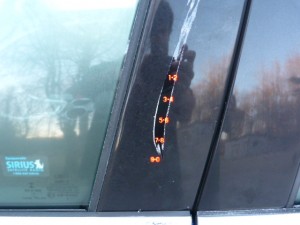 A really neat – and unique – feature the Ford offers is a touch keypad entry system located on the side pillars. Enter your code and the car unlocks. You literally can’t lose your key – unless you forget your code.

Though nominally a bread-and-butter family kind of car, the Fusion offers a horn o’ plenty of high-end gadgetry, including adaptive cruise control, blind spot detection, automated park assist, Sync voice command of the infotainment stuff and owner-customizable MyFordTouch LCD display that allows you to configure many of the car’s systems according to your personal preferences. The MyTouch systems also includes multiple USB ports, an SD card reader and RCA video jacks. Top-of-the-line Titanium models get a premium HD Sony audio system and 12 speakers on top of this, plus 18 inch wheels (19s are optional) heated leather seats and multi-zone climate control AC.

The entry-level Fusion is still well-equipped – and a very good deal. But the new roster of equipment and features offered (or included) in higher-trim and higher-cost Fusions edges the car into the entry-luxury segment in every way except for status. Ford seems intent on upmarketing the Fusion – but it remains to be seen whether people will pay almost-Lexus money for a Ford.

Taking this a little further: 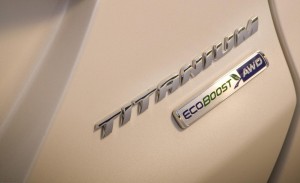 The AWD that makes the Fusion fairly unique in its segment is only available with the high-trim Titanium Fusion with 2.0 turbo engine – which has a base price of $32,200. Last year, you could buy a V-6 equipped/AWD Fusion for about $28k. That made it a bargain. The new one is nice – but isn’t.

A bargain, that is.

No offense meant to Ford. But I think it’s risky for them to have priced the Fusion in such company. Americans are a status-conscious lot, like it or not. A car can be an excellent car, but if the brand doesn’t have the snob appeal to go with its price tag, it can be trouble. 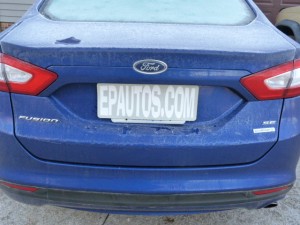 My only major complaint is that AWD is now a high-cost option. Other than this, the new Fusion is a must-see/must-drive in its segment that gives you more car – literally – for about the same coin.

And in a very attractive package.