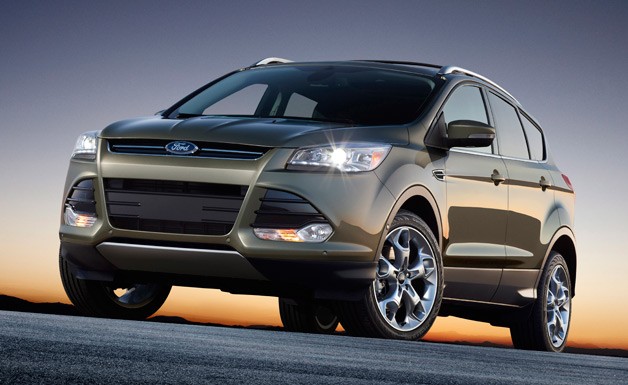 The current Ford Escape shares virtually nothing with the previous Ford Escape – except a name and the Blue Oval badge. Conceptually, aesthetically and functionally, it’s a very different vehicle. 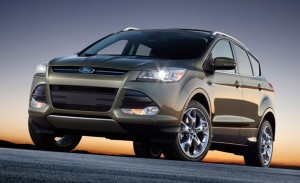 Mostly, this is a good thing.

The old Escape was dated, clunky – and slow.

The new one is slick, modern – and quick.

But, the upticked fuel economy (and performance) has its costs.

Because, of course, there’s no such thing as a free lunch. 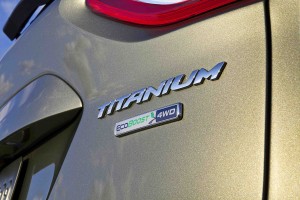 The Escape is a compact, two-row crossover in the same general class as the Honda CR-V, Toyota RAV-4, VW Tiguan and Hyundai Sante Fe. Like them, it is car-based (Focus, in this case) but rides a bit higher off the ground than a standard passenger car.

Also like them, it’s available in either FWD or AWD versions.

Unlike most of its competition, however, the Escape offers mostly turbocharged engines (only the base trim’s engine isn’t turbocharged). Ford has embraced small engines with turbos (“Ecoboost”) as the best way to maintain power/performance while also meeting the government’s ever-increasing fuel efficiency mandates. 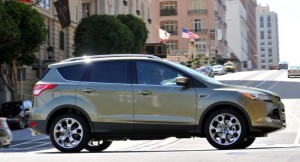 The mid-trim SE comes standard with a turbocharged 1.6 liter engine and has an MSRP of $25,550. A top-of-the-line Titanium equipped with the same engine starts at $29,100.

Both these trims can be ordered with a larger/stronger 2.0 turbo engine – and with (or without) AWD. 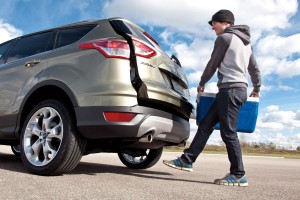 The Escape was totally revised for the ’13 model year so the ’14 is largely unchanged beyond some trim shuffling and the addition of a back-up camera and Ford’s Sync voice-control system to the roster of standard equipment on all trims, including the base S trim. 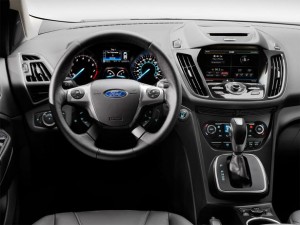 Optional 2.0 engine improves on the power/performance/capability of the formerly available V-6 engine – and gets much better gas mileage.

Roomier inside than old Escape.

Sportier driving than its rivals.

Almost $3k price uptick over base S trim equipped with the not-so-economical 2.5 engine to get the more fuel-efficient 1.6 engine.

2.0 engine is almost a must-have, if you want the economy of a four and the power of a six.

No manual transmission option for us. 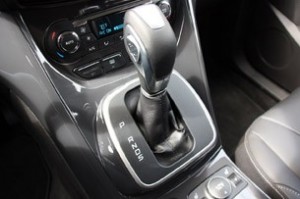 No diesel engine option for us.

Not quite as roomy inside as most of the competition.

Some fussy controls – and a super-pushy Belt Minder buzzer that has no “off” switch.

Escape offers three engine possibilities – all of them fours. Two of them are turbocharged fours. They replace the old Escape’s formerly available V-6. 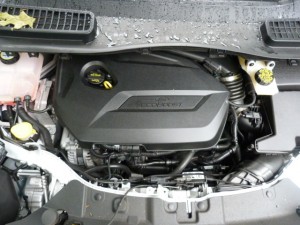 All other Escapes come standard with Ford’s “EcoBoost” 1.6 liter turbo four – with the option to upgrade to a 2.0 liter “EcoBoost” turbo four.

The 1.6 liter engine produces 178 hp and – courtesy of the turbo – 184 lbs.-ft. of torque at just 2,500 RPM (vs. 171 lbs.-ft at 4,500 RPM for the old 2.5 liter non-turbo four). This increased mid-range torque markedly improves part throttle performance; however, the 1.6 liter Ecoboosted Escape isn’t much quicker than the 2.5 liter Escape: 0-60 takes about 9.4 seconds with FWD, a few clicks slower with AWD. You do get better gas mileage out of the deal: 23 city, 33 highway – bit it’s not a huge improvement. Read those stats again. The 1.6 liter turbo four rates exactly the same 23 city as the previous generation Escape’s non-turbo 2.5 liter four – and the highway figure (33 MPG) is only 5 MPG better. Compared with the 2014’s base 2.5 liter engine, the difference is even smaller: 1 MPG better in city driving and 2 MPG on the highway. During my week-long test-drive in a 1.6 Escape, I averaged 25.4 MPG according to the car’s computer. 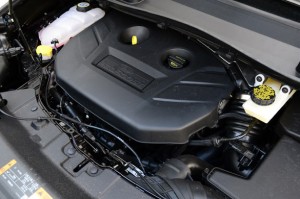 That’s what more torque – coming on sooner rather than later – can do. Acceleration-wise, nothing in this class of vehicle touches the 2.0 equipped Escape. The RAV4 and CR-V aren’t even in the ballpark; the turbo Tiguan (200 hp, 7.5 seconds to 60) isn’t much of a threat. Even the more-powerful-on-paper Hyundai Sante Fe is slower (mid-high sevens) despite its advertised 264 turbocharged hp.

Fuel economy with the 2.0 Ecoboosted engine is also improved – this time, significantly so: 22 city, 30 highway – vs. a consumptively unacceptable 19 city, 25 highway for the old V-6 (18 city, 23 highway if you got AWD). Here again, nothing in this class matches it. 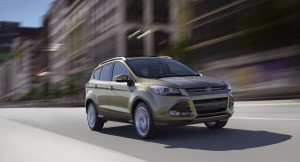 The base-engined (2.5 liter) Escape is adequate for A to B driving, especially in-city driving and commuting. I’d personally choose it over the Ecoboosted 1.6 liter engine, despite the 1.6 liter’s slightly higher mileage – because its much higher price “up front” – almost $3k – is going to take a long time to work off in terms of at-the-pump savings, given a mere 1-2 MPG difference in favor of the 1.6 engine.

I’m also worried about the down-the-road issues with these tiny turbo’d engines. Ford is already dealing with consumer complaints about them (see here). This is not good news. What happens when they are out of warranty, six or seven years down the road from now? Turbos (and related peripherals) are very expensive. The base 2.5 engine may be less than a JATO rocket. But then, the performance of the 1.6 liter engine isn’t exactly neck-snapping, either. It does feel stronger in the mid-range/part-throttle department – because the engine makes more torque, at lower engine RPMs. But mid-nines to 60 (with FWD; AWD versions are slower) is under-par for a car that’s not a basic-transpo economy car. The current par is about 8 seconds. 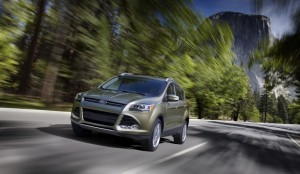 The 2.0 engine, on the other hand, rocks. This is a turbo engine that behaves like a turbo engine. When you punch it, it punches you. Passing/merging is as effortless as Superman leaping tall buildings in a single bound. Up, up and away! Response is immediate at all RPMs, with a blizzard of torque available at just above idle speed. You get all this – and good gas mileage: 22 city, 30 highway. Read that again. Those stats are only 1-3 MPG below the 1.6 engine’s stats. But the 2.0 Escape gets to 60 about three seconds quicker.

The Ecoboost 2.0 engine, unlike the 1.6 Ecoboost engine, delivers both economy and performance, without compromising either. This justifies its price premium – and is an objectively obvious improvement over the too-thirsty/too-slow V-6 used in the old Escape. 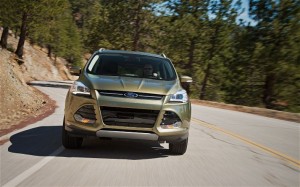 And what’s really cool – if you’re a hooligan – is that Ford allows you to have this engine with FWD. You know what that means, right? Of course, you’ll have to scroll through a few hidden menus to find the traction control “off” button. But it’s there.

You know the rest…

Regardless of engine, the new Escape drives – rides and handles – far better than the old Escape. This is particularly noticeable at today’s higher highway speeds. With many Interstates now posted 70 – and traffic running closer to 80 – things like wind noise and road noise are much more evident . . . if the vehicle has iffy body integrity and less-than-tight insulation. The Escape has neither. It also feels – it is – more stable, probably because of many design changes, but the two most obvious are the more aerodynamically efficient shape of the new model – vs. the aerodynamically inefficient, SUV-esque boxy shape of the old model – and also the new Escape’s lower-to-the-ground stance. Clearance is now 7.9 inches vs. 8.4 for the old model. This may slightly reduce the new Escape’s theoretical off-road potential – but the less top-heavy/lurchy handling on-road reality is well worth the price. 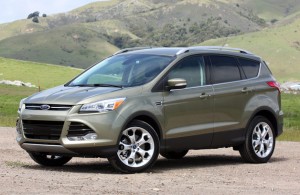 The popularity of SUVs is fading fast – such that even vehicles that aren’t really (and never were) SUVs but only tried to look like SUVs are no longer even trying to look like them. The unpleasant association in many people’s minds with clumsy handling and atrocious mileage probably accounts for the aesthetic morphing of “crossovers” like the Escape back toward the car-ish side of the spectrum. It looks like an enlarged Focus (just like the Porsche Cayenne looks like a beefed-out 911) which it ought to given it is an enlarged (and higher-riding Focus). This is a compliment, incidentally. The Focus is a good-looking, proportionate car – and the Escape is a good-looking, proportionate crossover. 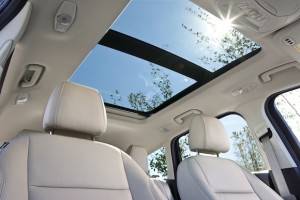 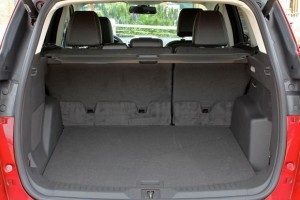 The biggest difference between the Escape and most of these competitors, though, is the Ford’s sportier demeanor. The only one that’s comparable on that score that also provides comparable (or more) room inside is the new Sante Fe. It is arguably the model Ford should be most worried about. Unlike the CR-V and RAV4 – neither of which offer more than 185 hp and 9-plus seconds to 60 or more than 31 MPG – the Hyundai offers comparably slick looks, a standard 190 hp engine – and an optional 264 hp turbo engine. The one thing it doesn’t offer is great gas mileage. The turbo Sante Fe rates 20 city, 27 highway with FWD and 19 city, 24 with AWD – far below the Ford 2.0’s outstanding (for this class/power/performance level) numbers. 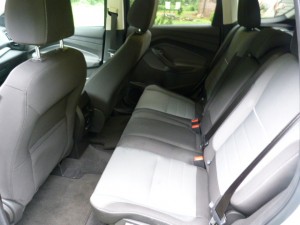 Ford sells the Escape in Europe as the Kuga – and over there, it’s available with high-torque/high-mileage diesel engines (see here) that are also available with – wait for it – six-speed manual transmissions. The European Kuga’s 2.0 liter Duratorque diesel engine delivers 45-50 MPG – slightly better than than the C-Max hybrid I reviewed a week or so ago (see here) and massively superior to the 1.6 liter Ecoboost gas engine we’re stuck with here as the “economy” engine. 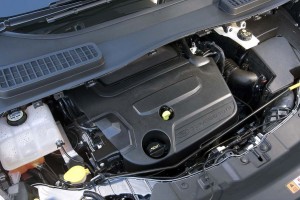 It’s vicious, evil and downright mean-spirited that we don’t have access to these diesel (and manual transmission) options here. But don’t blame Ford. Blame the suits in DC who have made it too cumbersome and too expensive for most manufacturers to export their diesel powertrains to the land of the formerly free. While they lecture us about the need to conserve energy – and impose ever-more-onerous fuel-efficiency standards (35.5 MPG average by 2016) they limit – through counterproductive regulation – our access to vehicles that are exceptionally fuel efficient – more efficient, in some cases, than hybrid vehicles. Because they’re diesel vehicles – and U.S. (federal and state) diesel emissions requirements differ from those in effect in Europe. It’s not that European diesels are smog-spewers – or that European diesel emissions standards are lax. They’re just … different. These bureaucratic-regulatory differences (and the obstacles they present to economically viable importation) are the sole reason for the dearth of diesel-powered passenger vehicles here. 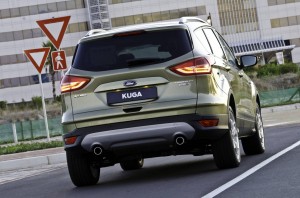 Instead, we get small displacement turbocharged gas engines which aren’t nearly as fuel efficient as diesel engines, but which cost a lot up front (nearly $3k in this case, for the 1.6 engine vs. the base 2.5) and which may cost us a lot down the road, too.  The owners of non-turbo cars don’t have this worry. Ford has probably done extensive durability testing – and maybe these Ecoboost engines will prove to be durable, long-lived and trouble-free. But the fact is we won’t know – either way – until hundreds of thousands of them have been in service out in the real world for at least eight or nine years. 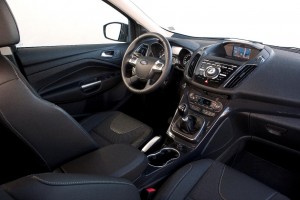 And I’d still rather have a 45 MPG diesel – teamed up with a six-speed manual.

Other stuff: The Escape’s belt-minder buzzer is much too aggressive. It will belligerently beep at you as soon as you close the door and begin to drive away – even if all you’re doing is trundling the 20 yards down the driveway to the mailbox. These belt-minder buzzers are not – yet – mandatory by law. Vehicle owners should be able to easily turn them off if they wish to do so. 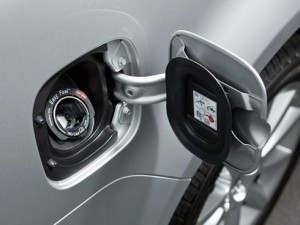 The hands-free liftgate opener is brilliant. Just swipe your foot under the bumper and it automatically opens up. Amazing no one thought to add this extremely helpful feature until now. Ditto the keypad entry system – something Ford (Lincoln) pioneered back in the ’80s and which (so far) no one else has been smart enough to emulate. I also dig the capless fuel fill system. Just insert the nozzle, top off – and that’s it. No dirty cap to handle and get grime all over hands – or your clothes.

Overall, a really nice vehicle. Well done, Ford. My only substantive complaint is the missing – and much needed – diesel. 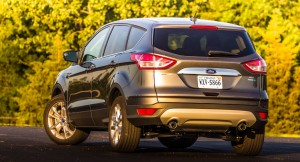 If only it were available with that euro-spec 45 MPG diesel.

Go ask your “representatives” about that.

Reader Question: When Did C02 Become a “Pollutant”?