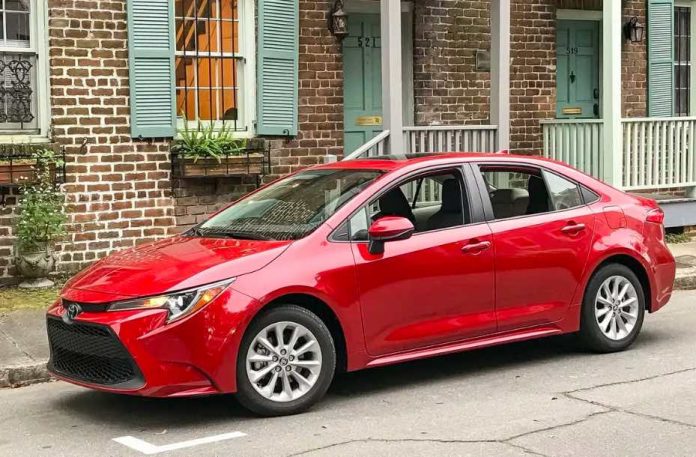 Only two cars rival the success of the Toyota Corolla. They do not exceed it.

The Model T Ford – and the VW Beetle. The original Beetle (the one made from the mid-1930s through the early 2000s  . . . Hecho en Mexico) which is a continuous production run of 70-something years.

Toyota has sold twice as many Corollas – 46 million of them – over the past 50 years. 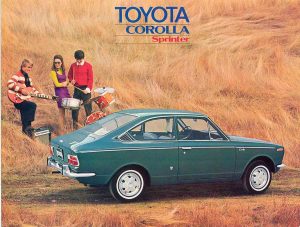 Like the Model T and the Beetle, the Corolla has never been a sexy car. But sexy is often superficial – and hides something ugly underneath.

The Corolla’s solid bones are what’s kept people committed. It was – it is – a good car. Solid, dependable.

A car that you could bank on not falling apart on you the week after the warranty expires; the one that will be your trusty companion for years after you make that last payment – and probably still trusty enough to hand off to your kid when it was time for his first car, fifteen years after you left the dealer’s lot in it.

But solidity has caught on. 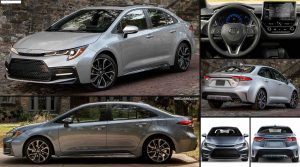 Which is just what Toyota has added to the mix with the latest Corolla.

And yet, still the same.

The Corolla is the world’s perennially best-selling entry-level compact-sized sedan.

Which is now available as a sporty hatchback, too. 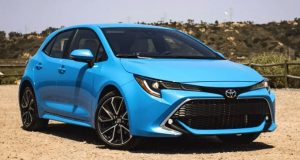 With a new, larger – and much stronger – engine, for those who want some pep to go with the Corolla’s legendary practicality.

Which includes a stupendous 41.4 inches of backseat legroom for the sedan. That’s several inches more legroom than some larger sedans (including the mid-sized Camry) have for their back seat passengers.

And nearly as much as they have for the front seat occupants, too.

Prices start at $19,500 for the base L trim sedan, which comes standard with an updated version of  the 1.8 liter engine  that was last year’s only available engine – paired with a continuously variable (CVT) automatic transmission. 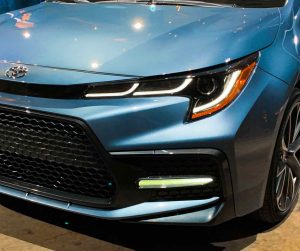 A top-of-the-line XSE with the same engine but paired with the CVT automatic, heated leather seats, an upgraded (8 inch vs. 7 inch) tablet-style LCD touchscreen and an 18-inch wheel/tire package lists for $25,450.

The hatchback Corolla, which comes standard with the 2.0 liter engine/manual transmission combo, starts at $19,990 for the SE trim. A top-of-the-line XSE with the 2.0 engine and CVT stickers for $24,090.

A 52 MPG-capable hybrid version of the Corolla is also available; it will be reviewed separately. 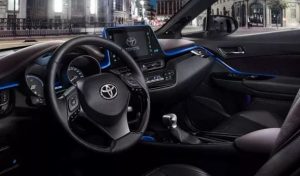 Both versions of the Corolla are new. They are styled more aggressively – and sit much more suggestively.

Both are almost two inches lower to the ground: 5.1 inches  vs. 6.7 for the previous Corolla. The hatchback is also almost a foot shorter overall – but has much more cargo capacity due to its hatchback vs. trunk layout, which allows almost all of the available interior space to be used for carrying stuff when you’re not carrying people.

All Corollas come standard with Wi-Fi, AppleCarPlay and Amazon Alexa.

For the first time, you can get a configurable LCD main gauge cluster in a Corolla, as well as turns-in-the-curves adaptive LED headlights and Dynamic Radar Cruise Control – features that as recently as ten years ago were only available in a Lexus – and not for $22k or so. 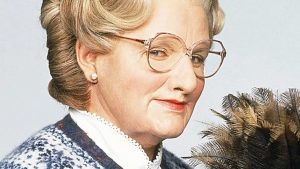 The safe bet is no longer stodgy.

Sedan’s backseat legroom is comparable to what you’d find in a six-figure, full-size luxury sedan.

If you want a manual transmission, you have to buy the larger/stronger engine.

Hatchback’s back seats are much tighter than sedan’s – and rivals’. 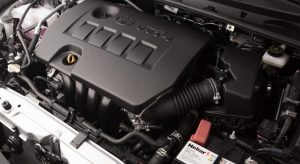 The sedan still comes standard with the familiar 1.8 liter engine that used to be the Corolla’s only available engine – but it’s not quite the same engine. 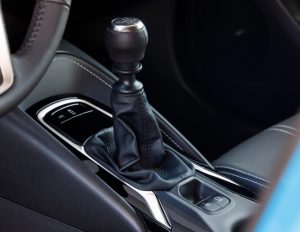 The bad news, if you prefer to shift for yourself, is that Toyota has decided to offer the 1.8 liter engine only with a continuously variable (CVT) automatic transmission.

Last year, you could get it with a manual, which made up for the lack of horsepower by letting you make the most of the horsepower there was.

The very good news, however, is that you can get a manual transmission – a six-speed manual, with rev-matching downshifts – and a much more powerful engine to go with it.

A 2.0 liter engine is now available in the sedan and standard in the hatchback.

This engine produces 169 horsepower, which makes it the strongest engine ever offered in a Corolla. It is also a very high-compression engine (13.0:1) which Toyota uses to increase cylinder pressure – and so power and efficiency  – without the cost (and complexity) of a turbocharger, as almost everyone else is doing. 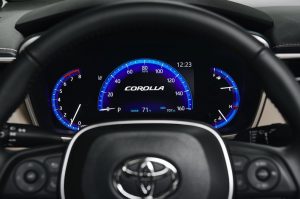 This engine has fewer parts than its turbocharged cross-shops (for example, the Honda Civic) and so fewer things to wear out and cost you money after the warranty expires.

Impressively – there’s that word again – the 2.0 liter engine is designed to run best on 87 octane regular gas. This is a perk of direct injection, which the new engine also has. Without it, a 13.0:1 compression ratio would mean mandatory high-octane premium gas – and an extra 20-30 cents per gallon at every fill-up.

On the other hand, the 1.8 liter engine is still a port fuel injection engine – and so even simpler and probably even less apt to make you open your wallet after the warranty expires. 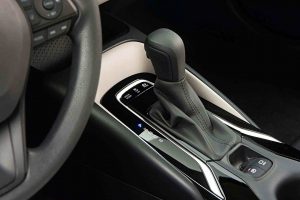 If you prefer not to shift for yourself, the 2.0 liter engine can be paired with the CVT automatic – and in both versions of the Corolla.

The CVT has the usual manual-control mode, which mimics the up (and down) shifts of a conventional automatic, but without the shift shock.

It also has something unusual in a CVT: A traditional (geared) first gear, with the usual CVT pulleys and bands taking over after the car gets moving. Why do this? To help the car launch stronger and more reliably.

The geared first gear takes most of the load of getting the Corolla going, which ought to reduce wear and tear over time on the bands, the part which usually wears out first in a CVT. 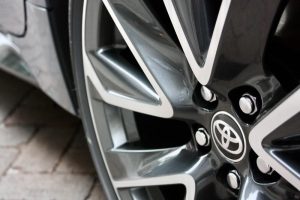 Which means the Corolla’s CVT should be as durable as the rest of the car.

Be advised, however, that the manual-equipped version is noticeably quicker. It gets to 60 in about 7.5 seconds vs. 8.5 for the same car with the CVT. 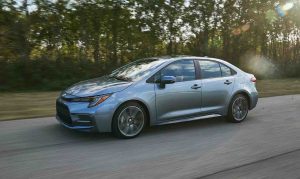 The changes go deeper than what’s under the hood.

The hood itself is 1.4 inches lower than before, which – along with a lowered-to-complement dashboard – greatly improves forward visibility, something that’s becoming harder to find in many new cars, which seem to have been styled by Stevie Wonder.

The engine – either one – also sits lower in the bay, which puts its weight closer to the road, always a good thing as far as stability and balance are concerned.

Both Corollas sit just 5.1 inches off the pavement vs. 6.7 inches for the previous model.

There’s newness under the floorpans, too. The previous torsion beam rear suspension has been replaced with a multi-link design that improves the car’s handling and its ride. 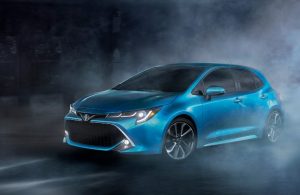 Equipped with the optional 18-inch wheels (largest ever offered by the factory) and the new 2.0 liter engine and six-speed manual, this Corolla lives up to its looks.

It also gives Toyota buyers the kind of looks – and feelings – they used to have to shop Mazda or Honda to get.

The Corolla is quick – a superlative that was among the very few which did not apply to previous Corollas.

It is also fun – and there’s another one.

The fact that it’s more fuel-efficient than the previous-gen Corolla with the 1.8 liter engine is like getting a ribeye steak for the price of hamburger.

The sedan is the same package, only in a subtler – and longer – wrapper.

The Corolla is almost a mid-sized car now.

Inside, it’s more than mid-sized.

The only thing the Camry’s got more of, space-wise, is a slightly larger trunk – 15.1 cubic feet vs. 13 cubic feet for the Corolla – but it’s a difference without much distinction. 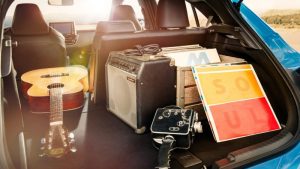 Meaningfully different is the Corolla’s smaller overall footprint. It is 182.3 inches long vs. 192.7 inches for the Camry. That almost-a-foot difference in length gives the Corolla more maneuverability when it’s moving (including a tighter turning circle) and gives you easier access to parking spots when it’s time to stop moving.

The hatch fits in even tighter places – because it’s about a foot less long than the sedan (169.9 inches) but there is a price to be paid for this. 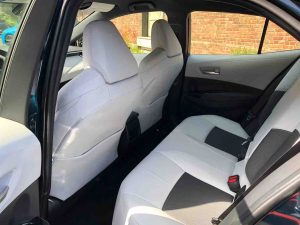 There’s about a foot less backseat legroom in the hatchback, which only has 29.9 inches for your gams.

But, the compensation for that is much more room for your stuff.

The hatch has almost 18 cubic feet of cargo space behind its backseats and with them folded down, that opens up to 23.2 cubic feet.

This space is also more available because of the hatchback layout. The liftgate opens wide and you have full access to the car’s interior. It may have less backseat legroom, but the hatchback Corolla can carry objects that the sedan can’t – unless you strap them to its roof. 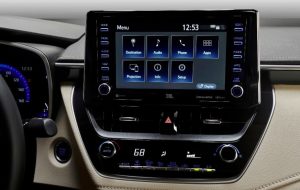 The secondary LCD touchscreen for the car’s audio and infotainment systems has been moved up to the top of the center stack, so it’s easier to look at without having to look down.

Base trims get a 7 inch screen; higher trims get a larger 8 inch screen with more apps. With either screen, the app icons are nice big squares that are easy to ID at a glance and even easier to tap accurately with the car in motion.

The center console cubby is small, but it’s deep – and so will take things like oversize drink cups too large for the cupholders near the shift lever.

The new Corolla would have qualified as a new Lexus as recently as five years ago. It might even qualify today.

You can get it – a Corolla – with an 800 watt/nine-speaker JBL ultra-premium audio system with voice recognition, configurable interior ambient lighting and adaptive LED headlights that turn in the curves. 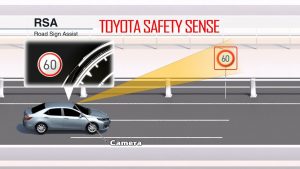 Also standard is something called Road Sign Assist, which is almost certainly a precursor to Intelligent Speed Assist – just mandated by the European Union for all new cars sold there beginning with the 2022 model year. RSA “sees” speed limit, stop, yield and other traffic signs and – for now – displays the appropriate icon in the main gauge cluster on the theory of in-case-you-missed it.

When Intelligent Speed Assist is mandated here – which the Safety Cult will surely demand – RSA will do more than let you know the speed limit is X or that there is a stop sign ahead. It will assist you to hew to the speed limit  – and otherwise obey the various traffic laws, to the letter. 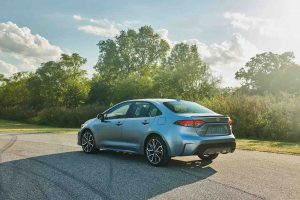 A related feature – also standard (part of the Safety Sense 2.0 package, included with all 2020 Corollas) is Lane Departure with Steer Assist – which countersteers when the system thinks you are wandering out of your lane or making a lane change/passing maneuver without having signaled first.

It can be turned off, for now.

There have always been plenty of rational reasons to buy a Corolla. Now there are other reasons, too.