More Toyota Corollas have been sold so far than VW Beetles ever (the old one and the New one). 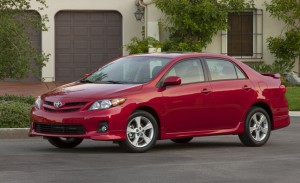 VW only sold 23.5 million copies of the original Beetle –  and it took VW a lot longer to do it (from the late 1930s all the way through the early 2000s, when the last one left the line in Mexico).

But, the Corolla has something else in common with the Beetle: It’s no longer the obvious go-to car in its segment.

Even as recently as ten years ago, the Corolla was.

Either it – or the Honda Civic, its only real rival as the best little economy car on the road – period. The rest were also-rans. Other than the Civic, nothing else could touch its royal flush hand of great value, deservedly great reputation, great  gas mileage and great resale value. 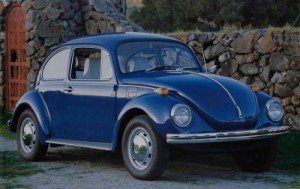 But that’s no longer true – and it’s a big problem for the Corolla.

Never before have so many low-cost cars been so good. Though the Corolla is still a solid buy, it is easy to be sorely tempted by competitors like the Hyundai Elantra, Ford Focus and Chevy Cruze – to name just three of the excellent – and emotionally appealing –  small sedans now challenging Corolla’s (and Civic’s) decades-long hegemony over the segment.

Are there still enough people willing to accept merely solid to keep Corolla on top?

The Corolla is Toyota’s “blue chip” compact economy sedan. It’s been a staple of the lineup for generations – and (along with Honda’s Civic) it was among the first compact economy cars from Japan to really make an impression on American buyers – and steal sales away from American car companies. 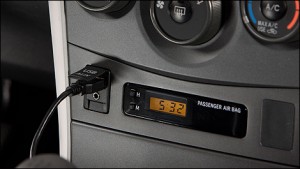 Prices for the ’13 Corolla start at $16,230 for a base trim L with five-speed manual transmission. The automatic-equipped L starts at $17,060. All come standard with necessary essentials such as AC – as well as keyless entry, tilt and telescoping steering wheel, a decent stereo with CD player and USB port for your iPod.

Two other trims – LE and S – are also available. The comfort-minded LE comes only with an automatic transmission and has an MSRP of $18,180. The sporty S starts at $18,230 with the manual, $19,060 with the optional automatic.

Other than some minor exterior cosmetic tweaks (new grille, chrome accented beltline) the ’13 Corolla is a carryover and pretty much the same as last year.

The car was last given a major update back in 2009.

As familiar as McDonald’s. You know what you’re getting.

Still a solid A to B transportation unit. 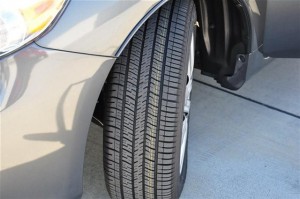 Several competitors give you better gas mileage – and perform better, too. 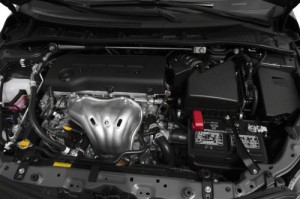 The Corolla is powered by a 1.8 liter, 132 hp four – teamed up with either a five-speed manual or (optionally) a four-speed automatic.

Considered in isolation, it’s a perfectly adequate powertrain for an economy-minded car. The problem – for Toyota – arises when you compare the Corolla’s powertrain – more specifically, the performance and economy of its powertain – with other models in this same general price range.

The ’13 Ford Focus, for example, comes standard with a 160 hp 2.0 liter engine – and your choice of either a five-speed manual or six-speed automatic. With its optional six-speed automatic – which is a dual-clutch automatic, state of the art – the Focus is capable of 28 city, 38 highway – noticeably better than the Corolla’s 27 city, 34 highway with the manual transmission.

The Corolla’s mileage (and performance) potential is badly hurt by the VHS-era technology four-speed automatic transmission. If you order this box, not only will you get lower mileage (the opposite of the case with technologically  up-to-date models like the 2013 Focus, which do better with the automatic) you’ll also lose almost 1 full second, 0-60. The automatic-equipped Corolla needs more than 10 seconds to do the deed. 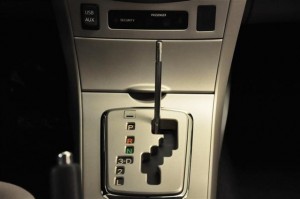 The manual five-speed version gets there in a more class-competitive 9 seconds flat.

Still, the bottom line is – Corolla’s a step behind the Focus. A step behind a Ford. When was the last time you could say that – had to concede that – about a Toyota product?

Another competitor, the Hyundai Elantra, comes with a 1.8 liter, 148 hp engine teamed up with a six-speed either way – manual or automatic. The Hyundai’s efficient six-speed transmissions enable it to deliver 29 city and 40 on the highway.

Again, another competitor that’s objectively more up-to-date, technology-wise – and which as a result is arguably a better buy, economy-wise.

The Chevy Cruze takes a different tack – but likewise comes out ahead.

You can order this model with a very small 1.4 liter engine that makes up for its lack of size via turbocharging. It makes the same 138 hp as the Corolla’s larger 1.8 liter engine – but is capable of as much as 42 MPG on the highway (28 city city). The Chevy gets better gas mileage than the Toyota. Eight MPGs better.

That has to hurt … if you’re Toyota.

Of course, the Honda Civic is probably the model most Corolla-minded buyers will cross-shop. Luckily for Toyota it is a closer contest – and a more favorable comparison. The Civic comes standard with a 1.8 liter four – same size as Corolla’s four – that makes 140 hp – virtually the same power output as the Corolla’s four. It comes standard with a five-speed manual – as in Corolla. The optional transmission in the Civic is a five-speed automatic – also a bit technologically dated, like the Corolla’s optional four-speed automatic. 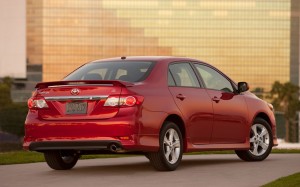 The manual-equipped Civic manages 28 city and 36 highway – just barely better than the Corolla gives you. And it takes about the same amount of time to get to 60: a little over 9 seconds, givin’ er all she’s got, cap’n.

But, the Civic does hold a trump card: Honda offers a high-efficiency HF package that increases the Civic’s mileage potential to 29 city, 41 highway – right up there with the current class leaders and significantly higher than Corolla.

Toyota doesn’t offer a special high-efficiency package with the Corolla, either.

Of course, Honda doesn’t give buyers the HF package for free. Its extra cost – $19,605 or $3,650 more than the base price of the standard Civic sedan – and $3,375 more than the base price of the Corolla – has to be factored against the higher gas mileage. You’d have to drive many miles – and probably, many years – to make up three grand-plus via an extra 3-5 MPG per tankful. 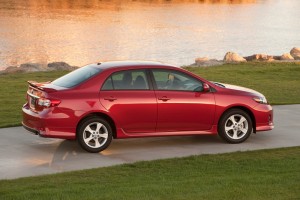 One of the things people like about McDonald’s is that whether you order a meal in California – or Connecticut – it will taste predictably the same. No surprises – which has its good aspects and its bad ones.

Because not all surprises are bad.

Climb in the Corolla and you won’t be surprised by anything. It will be pretty much exactly what you’d expect: Bland – but completely competent in every respect.

Acceleration is tepid – but not insufficient.

The optional four-speed automatic may be technologically dated – but it works just fine, shifting unobtrusively, with a wide enough spread between gears such that the engine usually doesn’t sound like it’s working too hard.

In manual models, the clutch is ideally suited for stop-and-go commuting. It’s got enough travel to not be abrupt – making it exceptionally easy for beginners to operate smoothly. And it’s also very light, so experienced drivers won’t get tired pushing it in and out. 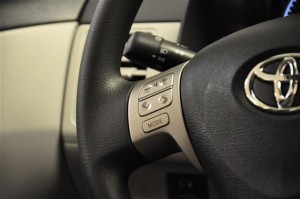 The car steers, corners and brakes in a bland but predictable and comfortable way. The ride is reasonably compliant – neither too firm, nor too soft. The standard fifteen-inch steel wheels and all-season tires are ideally suited for everyday commuting – and those steel wheels will last forever (unlike easily damaged alloy rims) while the all-season rubber should take you 50,000 miles or more before it’s time for a fresh set.And they’ll be cheap – or at least, cheaper than a set of 16 or 17 inch tires.

It’s a pretty quiet car, too.

In sum, the Corolla is as straightforward and non-surprising as a bowl of oatmeal – and as such, it is perhaps the apotheosis of “basic transportation.”

This is – or has been – a big part of the reason for the car’s success over the years. It’s safe. A known thing. 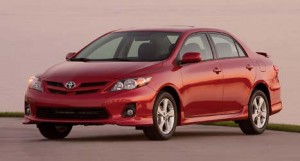 Corollas are quite literally everywhere – so no one’s going to notice yours unless you give it a flame paint job or tack a huge wing on the trunk. (A small wing is available, if you like.)

But the car’s conservative styling is arguably a big element of its perennial appeal – not everyone wants to be noticed, thank god. For some people, just going about one’s business is sufficient – and this the Corolla does superbly.

Also, the car’s conservatism has staying power. It takes a long time for a Corolla to look old, even when it is old. Toyota changes the exterior and interior appearance of the Corolla only gradually with each successive generation – and (so far) always along evolutionary lines. This may be one of the factors behind the car’s impressive retention of its value. Three or four year old Corollas routinely sell for 70 percent of their MSRP, brand new. 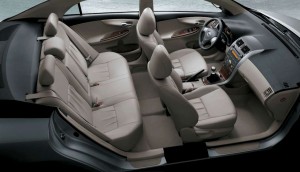 All are amazingly spacious cars. But the key point is they’re more spacious than the Corolla.

Well, up front they are.

In the second row, Corolla’s still tops, with 36.3 inches of legroom vs. a pitiful (for those stuck back there)  33.1 inches in the Elantra. Hyundai decided to make the front row spacious – at the expense of the second row. Same thing in the Focus, which only has 33.2 inches of second row legroom. The Cruze and Civic are more balanced – 35.4 inches and 36.2 inches of rear seat legroom, respectively.

The Corolla really can seat five people – five adults – in reasonable comfort. Several others in this segment can’t.

It’s an important thing to bear in mind if you’re going to be carrying passengers regularly.

Up front, there’s a dual door glovebox, tilt and telescoping wheel (unusual in an entry-level car, even today) and a plain, but tastefully  laid-out dash with everything you need and nothing you don’t.

I really like the standard-issue model’s oversized rotary control knobs for the AC and fan.  Electronic climate control is optional, though. 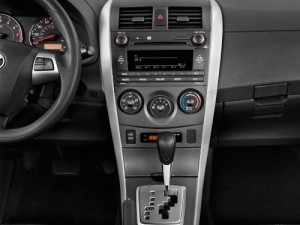 Toyota’s warranty coverage is a weak point: It’s still a mere three years/36,000 miles for the whole car and five years/60,000 miles for the powertrain. Of course, competitors (like Hyundai) have been forced to offer better warranty coverage precisely because of the Toyota’s sterling reputation – or rather, because they don’t enjoy the sterling reputation Toyotas do.

And here’s something to ponder: We won’t know for sure how good the competition really is until about ten years from now. Look around today and you’ll see a lot of older Corollas running around.When I say “older,” I mean 1990s-era Corollas.

Will we be seeing 15-plus year old Focuses and Elantras on the road as daily drivers circa 2025?

It’s no longer the clear number one in some respects. And it definitely doesn’t have the curb appeal of some of the latest competition. But it’s still solid – a safe bet.

And for many buyers, that is probably still more than enough.