A good name is a good beginning—and when Cadillac decided to christen its ultra- convertible after the mythical “gilded one” of Aztec/Mayan legend, it could not have chosen a more fitting nom de plume.

The Eldorado was over the top from Day One—an unapologetic expression of American post-war supremacy—a stamped steel reminder of GM’s status as the world’s mightiest industrial colossus.

Harkening back to coach-built era of the 1920s and ’30s, the very first production Eldorado was a low-volume, custom-bodied (and essentially hand-built) production version of the ’52 El Dorado show car first displayed at the GM Motorama in 1952. It rode on a modified version of the Series 62 coupe’s chassis, extended to a palatial 221 inches. Overall length would reach to the ends of the earth by the following year, when the Eldo got stretched to a fulsome 223.4 inches—about eighteen and half feet of wire-wheeled, zoot-suited extravagance.

Amazingly, even bigger things were yet to come.

GM’s legendary styling chief, Harley Earl, was the man chiefly responsible for the look of this imposing machine, of which just over 532 examples were made. All of them were convertibles (in ’56, a hardtop Seville version would be added to the lineup), with a special all-metal tonneau cover shared with no other General Motors vehicle.

The first-year Eldo rode low and wide on real wire wheels and double fat whitewall tires—the rears fully skirted in the fashion of the times. A vast “Panoramic” wraparound windshield just like the El Dorado show car’s gave the driver unimpaired forward and peripheral view. Up front, heavy-lidded headlights and a grinning gangster grille slathered in chrome up front, with protuberant “bullet points” on either side of that toothsome, mechanically menacing smile seemed to dare jaywalkers to take the risk….

Do you feel lucky?

Under the hood burbled Caddy’s full modern 331-cubic-inch OHV V-8, good for 210 hp. This engine weighed considerably less than its pre-war forbears and was designed for high compression and high performance. (Mostly stock versions did well in racing, including the 24 hours of Le Mans.)

Gold-plated touches adorned the car, inside and out—including the Caddy wreath and crest on the nose and the “Eldorado” nameplate on the dash. Even the engine was painted Cadillac gold.

The ’53 Eldo’s price tag was just as impressive as the car itself—$7,500 in pre-inflated, Eisenhower-era dollars. This was almost twice as much as a standard Series 62 Coupe DeVille—and comparable to the cost of a new single family home in the ‘burbs.

But then, making money off these first-year Eldorados was never the primary object for GM. The car was born to flaunt GM’s might—and to herald Cadillac’s stylistic dominance. It was a shot across the proverbial bow, to let others (specifically, crosstown rivals Lincoln and Chrysler) know that Caddy would broke no challengers.

In ’54, Caddy redesigned the Eldo to make it somewhat more mass-production friendly. Most of the exterior sheet metal was now shared with the Series 62 coupes and convertibles—and the sticker price was reduced to a more manageable $5,738—still a princely sum, but accessible enough that 2,150 buyers were in a position to ante up.

Power was upped, too.

For ’54, the 331 V-8’s output was increased to 230 hp; it was soon up to 270—thanks to standard dual four-barrel carburetors (these were optional on other Cadillacs).

Neither GM nor Mr. Earl—the George Patton of automotive stylist—were content to let the Eldo rest on its laurels, however. In 1957, all the stops were pulled with the release of the Eldorado Brougham, a stainless steel-roofed, suicide-doored Mafioso Mobile with a sticker price of more than $13,000—the equivalent of $100,000 in 2009 dollars.

This was the only time an Eldorado was sold as both a coupe and a four-door (pillarless) sedan.

The unusual—and complex—air suspension system drew outside air into an onboard compressor that inflated rubber “air domes” at each corner of the car. These air domes were regulated by a series of valves and solenoids in order to raise or lower each corner of the car to adjust ride quality for driving conditions.

It was a precursor to modern system that do the same thing, but without the benefit of modern computer-controlled technology. The Eldorado Brougham’s system gave Cadillac bragging rights, but gave customers headaches. Leaks and other failures were common. Many owners elected to have their cars retrofitted with conventional coil springs and hydraulic shock absorbers—and by 1960, GM dropped the air suspension system in favor of more conventional—and reliable—technology.

’59 and ’60 models received revised bodywork—including most notably the jaunty tail-fins that even today remain seared in the public consciousness as the apogee of American automotive glory.

Elvis drove one—and gave one to his mother, too.

Just over 900 of these ultra-extravagant, uber-Eldorados were assembled over the three-year production run which ended in 1960.

Harley Earl retired in 1958—but his protege Bill Mitchell would prove up to the task of keeping Caddy (and the Eldorado) on the cutting edge of automotive insolence.

’61 ushered in a more restrained look, with the fins still there but toned down a bit. They would continue to shrink into the flanks through ’66, by which time they had been almost completely integrated into the side panels of the car. Upright stacked quad headlights appeared in ’65 and the updated 390 V-8 was considered the equal or better of Rolls Royces of the time for high-speed smoothness.

In 1967, the Eldo that some call the Frank Sinatra Special made its debut. It was cool and suave where previous Eldorados had been swivel-hipped and duck-tailed. A vast expanse of sheet metal projected the front end into the next county well before the rest of the car arrived. A jaunty arch pressed into the sheet metal just behind the doors gave the rear quarters a distinctive flair—and for the first time, the rear wheelwells were not shrouded. The wheels, meanwhile, were no longer the traditional wire-spoked design. Mag-type “turbine” covers—shod with thin-line whitewall tires—added a touch of sportiness.

Early cars also had hidden headlights—with vacuum-actuated retractable doors. These went away in ’69.

It was formal and very elegant-looking but more youthful and enthusiast-driver oriented. You could still cruise—but now it also possible to bruise.

Many consider the ’67 Eldorado to be one of stylist Bill Mitchell’s masterpieces.

Underneath the enormous flight deck of a hood resided a 429 (and later 472) cubic inch V-8 driving the front wheels through a specially modified, chain-drive Turbo-hydramatic three-speed automatic transmission. It shared its basic chassis with the Oldsmobile Toronado, which had been launched the previous year—though the Olds version had its own Olds-specific engines.

The ’67 front-wheel-drive Eldorado was a historic milestone for Cadillac that in many ways—both stylistically and functionally—recalled the Cord 810 of the Art Deco period more than 30 years earlier.

Front-wheel-drive and 340 horsepower (375 with the larger 472) made for all sorts of fun when the gas pedal was floored. You haven’t lived until you’ve experienced the pre-computer/pre-traction control vicious left-right pull of a 4,500-lb. FWD car with an 8-liter V-8 flexing its muscles under hard acceleration—tires squealing furiously as the driver fights to keep the prow pointed straight ahead.

Or at least, keep the thing out of the ditch.

By 1970, the Eldo was packing 500 cubic inches—8.2 liters of cast iron Detroit Motor City V-8. It was the largest engine Cadillac (or any American automaker) would ever make and in peak tune (1970) developed 400 horsepower and an astounding 550 lbs.-ft of torque. This would decline, along with the power output of all GM engines, after the 1970 model year. By 1976—the final year for the 500—rated output was down to just 215 hp.

One thing was missing, though. When the ’67s appeared there was no longer a convertible in the lineup. ’67–’70 Eldos were hardtop coupes only.

Buyers could at least order a power-actuated sunroof.

In ’71, the convertible option reappeared. So did another few inches of length as well as a coupe hundred pounds of sheet metal cellulite, much of it due to the need to make the big Caddy compliant with Uncle Sam’s new bumper-impact requirements.

The last of the “real” Eldos strode the Earth on a 126.3-inch wheelbase and (in convertible form) oppressed the scales at 4,730 lbs. Fender skirts and slab-sided “fuselage” styling also reappeared—marking a trend away from the sporty appearance of the ’67–’70 models and a return to the heavy cruiser look of the ’50s–’60s Eldorados.

Wise buyers sniffed change in the air and snapped up their big-cube ragtop land yachts while they still could. 1976 would be the final year for the convertible as well as the 500-cube V-8. There was a speculation frenzy over these supposedly “final” convertibles—of which 14,000 were eventually built, with the last 200 off the line decked out in red, white, and blue pinstriped Bicentennial trim. Dealer gouging of customers interested in these cars was legendary—with some buyers reportedly paying twice the sticker price of $11,049.

Though the trimmed-down ’77 and ’78 Eldorados came only as hardtop coupes, they were at least still sizable compared with the rest of Detroit’s offerings—outside as well as under the hood. While the 500 V-8 was gone, Caddy came through with a 425 V-8 and a gaudy Biarritz luxury package that included a thick-padded vinyl roof with opera lights on the C pillars, two-tone paint treatments, stainless-steel trim plates, and crushed velour (or leather) seats.

A restyled notchback Eldorado appeared for ’79—and this body style carried through to 1985. While shorter, smaller, and much lighter (by almost 1,000 lbs.) than before, these were still handsome—and respectably broad-shouldered carriers of the Eldorado tradition.

A 368-cubic-inch V-8 survived through ’79–’81—still bigger than most anyone else was offering at the time. The trademark long hood survived, too. Cadillac even briefly reintroduced a convertible Eldorado for the ’84 run—although owners of the supposedly “last” ’76 convertibles were none-too-happy about this development, having paid huge mark-ups on their cars.

Only about 3,000 of these latter-day convertible Eldorados were made, according to records.

Though the Eldorado name lasted another 17 years all the way to 2002, the models built from ’86 up are downsized, subdued-looking critters in comparison with their fabulous forbears. In ’87, the Allante became the star Caddy coupe—though it was destined to have a short life due to its combination of exorbitant price and poor build quality. The ’94–2002 Eldorado was a decent attempt but never had the outsized personality of the classic-era versions.

Today these latter-day shadows of Eldorado’s better days languish on used car lots at used Corolla prices—while the titans of the Earl and Mitchell eras of decades past have become highly esteemed collectibles.

* Through the 1970s Cadillac outsold Lincoln, its nearest rival, by more than 3–1. 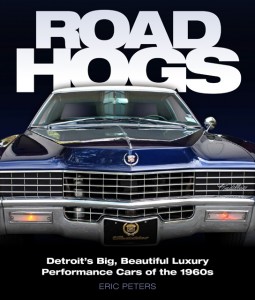 Did you know the Japanese built a GTO?