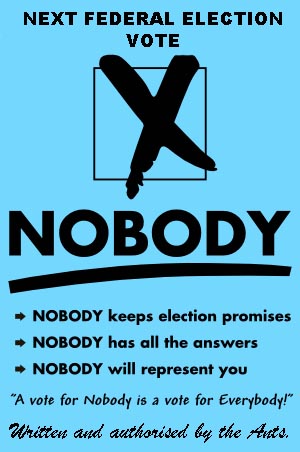 Refusing to fly again until TSA Submission Training is done away with – and not buying cars equipped with Big Brother technology – that’s a good start on the path back to liberty. But if we really want to pick up the pace – and get back to what this country once was, a very long time ago, there’s a play we could make about a year from now that would fundamentally change everything:

Not until, at least, voting isn’t a con – as it is currently and has been for decades.

No, worse than a con.

Voting in the context of our current system is the mechanism by which we enslave ourselves – and this is key – without being conscious of our enslavement.

It is called the illusion of consent.

We – most of us, at any rate – believe that because we are offered the choice between Tweedledee and Tweedledum that the oppression subsequently visited upon us by the state and its agents has been done with our consent, since after all, we got to vote on it first.

It is an absurd proposition when you deconstruct it – as well as when examined in the light of morality. On a purely mechanical level, it’s ridiculous to believe that you or I or any individual has any meaningful say in what is done to us under color of law, on the basis of The Vote. Have you ever written your congresscretin? The form letters one receives in reply, auto-penned signature and all, reveal the weight given your mighty vote… .

Trust me. Every vote does not matter – or even count.

You, and I and everyone else – we’ve all been rendered moot by diffusion. We are as individually unimportant to the system as a worker bee in a hive.

But what really matters is the fundamental immorality of The Vote. Certain things should simply not be on the table. Human rights are not negotiable, but of course, most people no longer have any conception of human rights – or have had their conceptions warped into their opposite. That is, they believe in the right to violate other people’s rights via The Vote. It is ok to steal from your neighbor, for instance, provided it has been duly voted on first. To tell a man with whom he may associate, or buy from and sell to. And so forth.

The sickness this country suffers from is the false idea that the government operates with the consent of the governed. I don’t know about you, but no agent of the government ever asked whether I consent to anything that has been done to me, or done in my name.  If they want my money, they just take my money. My rights – and yours – have been regulated, delimited, conditioned and outright taken away against my expressly stated wishes – and yours too, probably. But we play along, because we have The Vote and because the system has conned us into accepting this absurd notion that it operates with our consent.

Well, what if we withdrew that consent?

What if enough of us simply declined to vote for Tweedledee or Tweedledum?

We are very tellingly encouraged – by both wings of the duopoly that runs this country – to  vote. They – Demopublicans and Republicrats alike – urge us via PSAs every election cycle that “It doesn’t matter who you vote for – so long as you vote.”

Is it not interesting that both wings should be so mutually in agreement on this point?

What they want above all is our affirmation of the duopoly’s rule over us, which we freely give them each and every election cycle – thus perpetuating the con.

But we could give the duopoly a Wizard of Oz moment if  enough of us just stayed home on election day – especially election day 2012.

Historically, only about half of all eligible voters ever vote in a presidential election anyhow – which means (roughly) about 26-30 percent of the actually-voting 50-ish percent. So, the little known fact of the matter is that El Jefe is (s)elected by, at most, about a quarter of all eligible voters.

We don’t even have “majority rule”!

Now, a goodly portion of the people who do vote are tax-feeders or parasites of one sort or another because, obviously, they have the most at stake. They will continue to participate for the same reason that stray cats will continue to show up when someone puts food out for them. But if, by not voting, the dwindling minority of non-parasites who have voted in the past – often with great enthusiasm in a misguided because within-the-system effort to hold the line (that is, to hold onto whatever remains of their rights and liberties) decided not to play anymore… if they withheld their vote…. the illusion of consensual government would be smashed at one stroke.

The truth would be laid bare. People would know how the system really works – and what it is really based on.

That is, force. The closed fist, the cocked and loaded gun. The truncheon and the Tazer. The prison.

And once that happens, once the cloak of consent is torn away and tyranny becomes obvious and undeniable – then tyranny’s days are numbered.

Remember: The system relies on our tacit consent. Withdraw that consent and the system will be laid bare for what it is.

And then it will not last long.