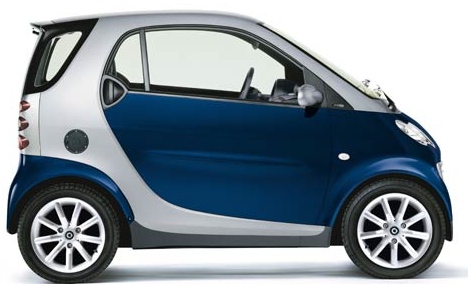 The poor ol’ Pontiac Aztek is old news – and also, it’s been beaten so badly I think it deserves some mercy. Or at least, it deserves to be left alone to pick its teeth up off the floor and wipe up the blood… .

How about some new targets?

But first, let’s define our terms. It is hard to find a genuinely bad car in the old sense. You know, an actual mechanical stinker. Something that won’t start – or run properly.That kind of bad is increasingly uncommon. Almost every late-model car, no matter the badge or brand, runs well enough, is reliable – gets you from “a” to “b” and all that. But while there may not be many bad cars around, there are definitely stupid cars around. Bad ideas. Four-wheeled-never-shoulda-beens.

I’ll begin with the obvious:

It is expensive (almost $13k to start and they only give you half a car), next-to-useless (a two-seater with no cargo room that is too top-heavy, short-wheelbased and underpowered to dare venturing out onto a highway) and – the piece d’ resistance – it doesn’t even get particularly  fabulous gas mileage. 33 city and 41 highway is about what you’d get in something like a new Fiat 500, which only costs about $2k more but for that you get a whole car with four seats and a trunk. And you can drive it out of your subdivision without worrying about being knocked into a ditch by a semi’s slipstream. Or run over by the semi coming up behind you. Hell, my 1983 Honda Silverwing motorcycle – which I bought for $2,000 – can carry just as many people as the “Smart” car, carries more cargo (no kidding, really) and gets 20 MPG better mileage. So, there you go. The Smart car’s about as dumb as it gets – and I haven’t even mentioned how it looks.

This one’s not ugly, just … pointless. The ZDXis a high-riding, low-rooflined crossover sport wagon that’s slow, doesn’t corner too well and can’t be used for very much. It’s also really expensive – pushing $50k with a few options on board. You tell me. It has 300 hp – but needs almost 7.5 seconds to reach 60 MPH. A V-6 Camaro or Mustang will stomp it – and a new Ford Fiesta or Mazda3 will keep up with it. And get twice the ZDX’s horrible 16 MPG. Did I mention it can’t pull more than 1,500 pounds, either? So, what do you do with a ZDX? You write a really big check – $46k, less options tags and taxes. No surprisingly, few are lining up to do so.

It has a silly name, for openers. Embarrassing, actually. Because there’s nothing remotely explosive about the Nitro’s performance. It needs a Prius-like 9.6 seconds to heave its two-ton self to 60 MPH, being both overweight and underpowered. Luckily, you can upgrade to a Detonator or Shock Nitro – and cut that time down to a merely slow 7.7 seconds. Neck and neck with a base Camry four-cylinder. Now that is shocking.  Nitros also come shod with ridiculous ghettowagon 20inch wheels, rendering the 4WD system useless deadweight and also reproducing the ride quality of a really tired ’69 F100. Gnomesayin’?

There is something demented about a six-figure electric car. It’s like spending a ton of money to build the ultimate motorcycle but it ends up having four wheels. Isn’t the whole point to get around high gas costs? But if the car costs two or three times what the equivalent gas-burner costs, then does it really matter whether it doesn’t burn any gas? You’re still burning money – right? So, yeah, the Tesla looks cool and it’s quick and fast and doesn’t use any gas. But you can buy the Lotus on which it’s based for half as much, get similar performance and put the $50k you just saved toward fuel for, oh, the next 30 years… . I feel green all right. Where’s the nearest bathroom, please?

Not the old New Beetle. The new (and just) Beetle. It’s no longer cute. It isn’t inexpensive ($19k to start)  and it gets startlingly godawful gas mileage: 22 city. This car has nothing in common with its Beetle ancestors other than its name. VW coulda-shoulda made it lighter, cheaper and much more fuel efficient. A 40 MPG $16k Beetle would have been a slam-dunk hit. But a macho Beetle that gets 22 MPG and isn’t even very quick (7.5 seconds to 60) has all the makings of an epic belly flop.

A Case of Officer Safety